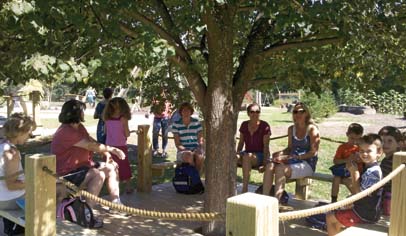 Through creativity and hard work, PTO Today's 2011 Parent Group of the Year for Outstanding Job on a Completed Major Project managed to create a $30,000 community playground with a budget of only $4,000.

The East Auburn Community School in Auburn, Maine, had a playground problem. The school’s aging playground equipment was wearing down, and it provided few opportunities for age-appropriate play for East Auburn’s youngest students. Too often, kids were left standing around waiting for a turn on the slide or the swing.

However, buying a brand-new traditional playground could cost as much as $100,000, and the school, which serves 170 students in prekindergarten through 6th grade, simply didn’t have that much money to spare.

So the PTO got creative and transformed the decaying playground into a beautiful, functional “natural playground.” Instead of using prefabricated metal or plastic equipment, natural playgrounds create play areas using wood, trees, earth mounds, rocks, and other natural features. In addition to providing the school with an exciting, safe place to play and exercise, teachers now use the natural playground as an outdoor learning lab. The new playground was built on a relatively small budget because the PTO was able to successfully marshal community resources to help.

For its efforts, the East Auburn Community School PTO received recognition for Outstanding Job on a Completed Major Project in PTO Today’s 2011 Parent Group of the Year search.

“The PTO had been talking for a while that we needed a new playground,” recalls PTO board member Jennifer Rombalski. In the 2009-10 school year, the PTO established a playground committee to work on making that goal a reality. The committee held monthly meetings to decide what type of playground to create and how the PTO would pay for it.

Committee chair Melissa Toussaint says the group started with the question “What would we envision as a good place for the children to go to?” The team agreed that a revamped playground space should be a place of learning as well as play. In addition, Toussaint and Rombalski said the reno-vations needed to show immediate progress to build positive momentum. PTO leaders felt they had to show that the small school was up to the challenge of tackling such a daunting project.

One of the committee members worked for the nearby city of Portland and suggested looking at the natural playgrounds in that city. Such playgrounds are relatively inexpensive, are creatively inspiring, and can be built in a fairly short period of time. The PTO mapped out what it wanted to do, then took its plans to the school board for approval.

East Auburn’s finished product includes stepping logs, a balance log, a double hill slide, a suspension bridge, natural climbing areas, and a wooden deck (which doubles as a pirate ship). Perhaps the most unique feature is the pebble harp, at which students drop pea-size stones onto metal strings to create music. As the parents envisioned, East Auburn students of all ages can enjoy the new playground, and the activities are designed to stimulate their imagination.

Parents and other volunteers constructed the playground, building hills of dirt and burying heavy logs in the ground. In addition to creating and install-ing all of the play stations, parents planted grass, flowers, and trees, built a picnic area for up to 40 people, and placed outdoor furniture.

“It took a lot of research,” Toussaint says. “The Internet was definitely our friend!”

Even though the natural playground concept was less costly than a traditional playground, it still could have cost as much as $30,000. So the East Auburn PTO turned to community resources for help.

Much of the money and materials needed came from simply cold-calling local businesses. The PTO made a point of asking for very specific, small donations. The community responded—a local landscaping business donated mulch, a construction company gave dirt to create the hills, and a tree services company provided the logs used for the climbing and play stations. Local restaurants contributed food for the volunteers. The PTO also raised $4,000 in cash for the playground.

“People were very agreeable and happy to support the project,” Rombalski says.

East Auburn parents also had to meet safety guidelines for the new playground, something they had little previous experience doing. But the school district’s facilities staff helped the PTO work through these issues, and they also moved out the old playground equipment.

In all, around 30 volunteers helped at various stages of the project, including employees from the local Kohl’s department store. The PTO sent out press releases to help pull in recruits. Work began at the start of the 2010 summer with a weeklong building session, with volunteers working six hours a day. The PTO finished up the work during the summer months, and the new playground was ready when the 2010-11 school year started.

Now, students enjoy the playground during the school day, then ask their parents to bring them back after school hours or on weekends. The natural playground spurs more active play than the old play space, and the quality of the experience is much improved, as well.

The East Auburn Community School PTO took a little bit of cash and a whole lot of creativity and came up with an exciting new natural playground. Here are some of their tips for completing a playground makeover.

Have a committed core. While it is great to get widespread volunteer buy-in, you need a small, committed group of people—particularly once construction starts—who are willing to see the project through from start to finish.

Recruit community resources. Many businesses are willing to help with worthwhile PTO projects like playground renovations. Even if they don’t contribute money, they may still be willing to provide materials, food, or even volunteers.

Consult your district’s facilities staff. These pros have the know-how to help you do the job right.

Have faith. If you wait until conditions are perfect, you will never have a new playground. Prepare as best you can, then take a leap of faith. You might be surprised at how much your school can accomplish.