Make Your Playground Project a Success 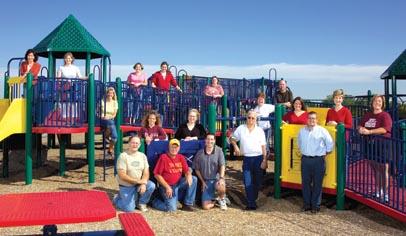 7 keys to planning any playground build or renovation.

When six neighborhood elementary schools in Oskaloosa, Iowa, combined into one, parents faced a significant challenge—to build a playground, at cost of $600,000, in time for the opening of the new school. Faced with a tight deadline, the Oskaloosa Elementary School PTO found creative ways to raise money and recruit volunteers, as well as strengthen school ties with the community.

Not everyone was happy about the new school. Its construction was funded by a 2 cent sales tax, which residents in the town of 11,000 approved in a contentious vote. And many families were fond of the neighborhood schools, even if they were old and overcrowded. “The community was really kind of divided before,” says PTO President Heidi Jannenga. “This was a way to start bringing people together.”

More than 50 parents volunteered to serve on committees for the project, which would create three separate handicap-accessible playgrounds: one for prekindergarten and kindergarten students, one for grades 1-2, and another for grades 3-5. The PTO developed a marketing campaign that motivated children and adults to get involved. As a result, more than 1,500 individuals, businesses, and organizations donated to the project.

Two local companies where PTO leaders worked allowed employees to assist with the volunteer build while being paid regular wages. More than 300 volunteers came out on build days, cutting $100,000 off the cost of the project.

That brought the price to $500,000. Because of the size of the project, the PTO was able to negotiate a 40 percent volume discount, bringing it down to $300,000. The school district funded about half the project, and the remaining $150,000 came from fundraisers, grants, and contributions from PTOs at the six original schools. Despite construction delays and inclement weather, the PTO completed the playground in December, just in time for the opening of the 1,100-student school in January 2005. PTO Today asked leaders of the Oskaloosa Elementary PTO to share their tips for a successful playground project. Although the school’s playground is larger than most, the lessons parents learned can apply to projects of any size.

Before you start pricing spiral slides, decide what goals you have for the playground project, Jannenga recommends. The Oskaloosa parent group placed Americans With Disabilities Act (ADA) accessibility, safety, ease of maintenance, and innovative design at the top of its list. Just as important, parents set a primary goal to guide all their efforts in planning, fundraising, and construction: The project should strengthen partnerships within the community and among people from all six schools.

Because the project was such a huge undertaking, each step was broken into smaller goals to keep volunteers from feeling overwhelmed, says Laurie Palmer, who served as PTO president in the 2004-2005 school year. “We had to have something that helped us keep going,” she says. “We had to be able to see we were meeting those goals.” The playground company representative helped divide the project into smaller tasks that required a wide range of skills, from taking inventory of equipment to spreading mulch. This list was publicized on posters, fundraising materials, and the project website. As committee members worked to reach smaller goals, they kept the big picture in mind: More than 1,000 children would be going to the new school, and they needed somewhere to play.

Establish a diverse planning committee, advises Michelle Wayne, who co-chaired the playground committee at Oskaloosa Elementary. In addition to parents, teachers, and administrators, the PTO recruited a recreation expert, a construction professional, and a community representative. Because a key goal was handicap accessibility, parents of children with disabilities were involved—including Wayne, whose son began using a wheelchair this year.

The PTO asked teachers what types of equipment students fight over at recess and solicited input from physical education instructors, who may use the outdoor space in their classes. The PTO also sought opinions from the maintenance staff, which would be charged with the playground’s upkeep. The key stakeholders—the children who would be using the playground—helped pick the equipment and played a key role each step of the way. Students raised money for the playground and later recorded radio spots calling for volunteers on build days. When the playground was complete, they created handmade thank-you cards that were sent to donors.

“Try to reach out in the community to people that have done this before,” says Marie Ware, a parent and executive director of the Mahaska Community Recreation Foundation. Most communities have a local parks and recreation official, someone experienced in construction, and a parent who’s worked on a previous playground project. These people can provide valuable guidance, she says.

Involving a construction professional from the beginning of a project is especially important for community builds, Wayne learned. “That person would be able to identify many issues involving installation that will be dealt with in the early stages of design planning,” she says. In Oskaloosa, construction professionals helped with site preparation and installation. This included operating heavy equipment, grading, checking elevations, reading construction plans, and showing volunteers where to dig holes. Employees of local companies also provided tools, supplies, and valuable advice. Jannenga asked experts at her own workplace to pitch in: “My company has a top-notch facilities staff that came onboard the planning team and helped see issues I didn’t know about.”

4. Know What You Want

Be clear about what you’re looking for before asking playground companies for proposals, Jannenga says. If you plan a volunteer build to save money, tell companies up-front so they can design a playground that is easy to install.

The Oskaloosa Elementary School PTO created detailed specifications spelling out what they wanted (climbing walls) and didn’t want (merry-go-rounds), and then submitted them to a group of prescreened companies. To evaluate the proposals, members assigned scores based on a range of criteria. In addition to cost, they considered design, components, service, and warranty. The group also conducted extensive reference checks and visited sites of playgrounds the companies had completed. Although the committee had sticker shock when they saw the proposed costs, members knew designs could be changed. And because of the large size of the project, they asked each company to provide a discount proposal.

Don’t be afraid to ask the community for help, Jannenga says. She headed an effort to create a marketing campaign to boost community involvement in the playground project. The campaign paid off in donations of food, tools, and heavy equipment. The HERO campaign featured caped superheroes that grabbed the attention of students, while its tag line, “Helping Education and Recreation in Oskaloosa,” appealed to adults. A parent and graphic designer created the cartoon figures, which were featured on all promotional materials.

A website developer provided a deep discount on a site that included a volunteer sign-up form, news and photos, and instructions on how to make a donation. Residents learned about the project at civic group meetings, where PTO officers spoke, and at sporting events, where parents displayed renderings of the playground to build enthusiasm for the project. Local media also helped get the word out. In addition to airing the student radio spots, deejays promoted build days on the air. The newspaper provided front-page coverage and donated $5,000 worth of ad space, and bulletins were posted on the local public service channel.

The project received the support of several local officials, as well. The mayor of Oskaloosa signed a proclamation declaring October 2004 as HERO month, and the superintendent of schools worked at one of the build days. At each step of the project, the PTO kept the community informed of its progress. A company donated its services to create a time-lapse video of the build. Parent group members later learned that local soldiers based in Kuwait had watched it when they went online to get the news from home.

6. Take a New Approach to Fundraising

Instead of having the same old fundraisers, look for ways to keep more of the profit, Jannenga advises. To raise money for the massive playground, the individual school PTOs skipped their annual product sales and created a new fundraiser, the Fun by the Square Foot campaign. Students collected donations, with $10 representing one square foot of the playground.

Awards included T-shirts and posters featuring the HERO superheroes, but the most sought-after prize was a limo ride to Dairy Queen, where students would receive a free lunch. Top fundraisers automatically won a place in the limo, but every student had a chance to win. For each square foot students sold, they received one entry into a drawing for the limo ride. In less than two weeks, students collected $51,000. And because the limo ride was donated, it was a low cost prize that energized students, Jannenga says.

As students solicited donations, they spread the word about another fundraiser, the sale of a limited-edition print featuring the local schools, created by a local artist and parent. Sales of the $30 print raised $6,000.

“People need to understand that in a construction project, just like building a new home, there will be things that come up that you never expected,” Ware says. The Oskaloosa project required the digging of more than 450 holes. The PTO planned to have the holes in place before the first build day, but it rained the entire week before. When volunteers started digging on Saturday, they were quickly up to their knees in mud.

Construction was held up again by geothermal wells located under the area designated as the playground for grades 3-5. School officials believed the wells were far enough below the surface that playground poles could be installed over them, but test holes showed this was not the case. Although the parent heading the construction effort had a background in engineering, he didn’t have a solution to the problem. Brian Kieffer turned to a construction company, which helped find a safe solution—custom-designed concrete pads to support the poles.

Like other parents involved in the project, Kieffer learned the importance of tapping community resources. It’s best to have established connections before something goes wrong, he says. “Make sure you have people on the committee who have good contacts with the local lumber yard, concrete plant, and equipment rental company,” Kieffer advises. “These will be the people you go to when you are in a jam.”