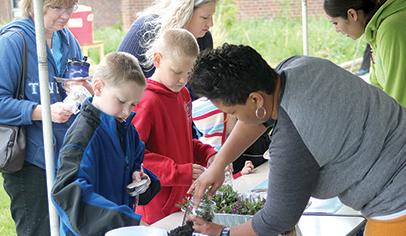 Once their school was saved, parent group leaders focused on giving back to the community—earning the group PTO Today's 2012 Parent Group of the Year Award for Outstanding Community Service Project.

What a difference a year makes. In fall 2011, the Parent Teacher Council at the Maria Montessori School in Rockford, Ill., had to fight just to preserve their school, which had been recommended for closure due to a massive local budget shortfall. Now Maria Montessori parents are celebrating not only because their school will stay open, but also because they are the winners of the Outstanding Community Service Project award in PTO Today’s 2012 Parent Group of the Year search.

Maria Montessori School was one of several schools placed on the recommended-for-closure list for 2011-12. Although parents didn't know if the school would stay open, the PTC moved forward, keeping up with a busy schedule of events even as they rallied in support of the school. Then in March 2011, the school board voted to keep the Maria Montessori School open. The fight to save the school both galvanized the parents and made them realize how much they appreciate their school, according to PTC volunteer coordinator Nicole Bergren.

“Once the school was saved, we had a different outlook,” she says. “We wanted to make sure we were giving back to the community as a whole.”

The PTC launched its Pay It Forward initiative, which wasn’t a single project but a year devoted to community service. It began with the Givin’ and Groovin’ Dance, at which more than 500 people donated items for a food drive. As well, families from the school agreed to label and sort cans for the local food bank.

Other projects included ringing the Salvation Army bell, Christmas shopping for children in a group home, delivering meals to needy families, and stocking a community bookshelf.

Maria Montessori is a Title I school serving prekindergarten through grade 6. More than 60 percent of its 335 students come from low-income families. The PTC wanted to make sure all families were able to participate in the service projects, regardless of their income level.

While the PTC came up with most of the service projects, PTC president Rachel Leon says the biggest campaign came from the students themselves. After reading A Long Walk to Water, a true story of a Sudanese boy who must walk eight hours a day for clean water, one student suggested a fundraiser for a charity that provides clean drinking water to the impoverished region. The school rallied around that goal, Leon says.

Students set an initial goal of $5,000 to drill a well, but quickly increased their goal to $15,000, which will both drill the well and complete the construction. In the spring, the PTC sponsored a Water Fair to raise both money for the project and awareness about water pollution and conservation. Classes raised money through bake sales, craft sales, and donation jars.

By the end of the 2011-12 school year, Maria Montessori students, parents, and staff had more than $12,000, and the school is working to raise the remainder of the money. “It was amazing how it ended up being so successful,” Leon says.

The school community had another big reason to celebrate, too. While Maria Montessori faced closure in the spring of 2011, the following spring the district approved a plan to expand enrollment and add grades to serve middle school students. The school had pushed for the expansion repeatedly over a 15-year period. The success of the latest proposal is attributed in part to the PTC's work to raise awareness of the school's specialized programs.

What the judges loved: The experience of facing a potential school closure spurred PTC members to reach out to help others rather than focus on their own need.