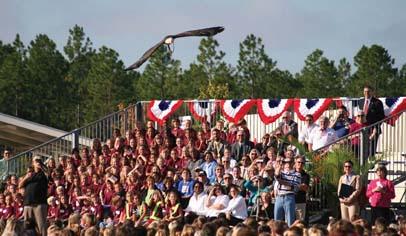 A combined literacy and community service project to save the bald eagle really took off for PTO Today's 2007 Parent Group of the Year national runner-up.

The parents at Timberlin Creek Elementary in St. Augustine, Fla., set their warp speed pace early on when they formed a PTO before their school building was even complete. The families of this fast-growing community south of Jacksonville had been busing students to other districts and were so excited to have their own school that they unleashed their enthusiasm in a blast of activity.

There were library books to select, kilns to buy for the art room, shading to install over the basketball courts and play areas. One teacher laughingly complained that at her former school, the challenge every year was finding someone willing to be room parent; at Timberlin Creek, her problem was having too many parents vying for the job.

So it should be no surprise that with its school just one year old, the PTO launched a community service project that has drawn the attention of the state of Florida, governors from 29 other states, assorted celebrities, and a bald eagle named Challenger.

The PTO came up with the American Eagle and Literacy Challenge after principal Cathy Hutchins asked the students in the K-5 school to think of a philanthropic project that would incorporate literacy. But the kids wanted to raise money to protect the American eagle, which then was an endangered species. (It was removed from the list in June.) The year before, students had voted to make the eagle the school’s mascot. Hutchins asked the PTO to work out a compromise.

The PTO set to work, pulling together a committee of 20 parents to brainstorm a solution that would meld the students’ idea with the principal’s vision. Their proposal was a three-part project that would include a letter-writing campaign by students to declare June 20 American Eagle Day; a statewide essay contest on the topic “How Reading Makes Me a Better American”; and a fundraising effort, with half the money to go to the nonprofit American Eagle Foundation and the rest to purchase books for day-care centers across the state.

Each goal of the project would be anchored by a series of events, including local, state, and national kickoffs to raise awareness about both the bald eagle and the importance of early literacy. To carry out the work, the committee assigned roles, including 10 liaisons with schools they hoped to recruit into the effort; a public relations representative; a photographer to document the project; a technology person to create DVDs of the events and create and maintain a webpage; a graphic designer; an events planner; a decorating team for the events; a scrapbooker to put together an album for the school; and people to ask businesses and legislators for support, work the events, sell items, and continually come up with new ideas. The number of committee members and the way they divided up their roles prevented the group from burning out.

A secondary goal of the project was to show students that they have a voice and can use it to change things for the better. The committee made this real for the kids by putting together a group of student representatives to speak to the press about literacy and the plight of the bald eagle. Still, the committee knew that the children had a better chance of being heard if they turned up the volume. So they invited other elementary schools with eagle mascots to join their effort, and they embarked on a dogged campaign to win the support of other organizations, celebrities, and politicians.

One of the groups that agreed to partner with the Timberlin Creek PTO was the Fraternal Order of Eagles, a 109-year-old service organization with more than 1 million members worldwide. Its backing gave the project clout, and it also led to one of the nuttier moments of the campaign.

The FOE’s national spokesman, country singer Billy Ray Cyrus, is the father of Miley Cyrus, who plays Hannah Montana on the Disney Channel show of the same name. The PTO wanted to ask Miley to be their spokeswoman but had little luck reaching either the child star or her father. Then one of the committee members learned that Cyrus would be performing nearby. Kendall, remembering her grandmother’s theory that “Men are boys grown tall; they love cake,” figured the way to Miley was through her father’s stomach—and his sense of humor. Kendall’s hobby is baking theme cakes, so she “researched” her subject by cuing up Cyrus’ song I Want My Mullet Back and then constructed a likeness of the singer in cake and frosting.

She and four committee members showed up at the concert with what Kendall affectionately dubbed “the mullet-head cake.” Although the ploy got the women backstage, Cyrus’ handlers wouldn’t give them more than 30 seconds. Undeterred, Kendall, a former air traffic controller who is trained to speak quickly and clearly, managed to brief Cyrus on the American Eagle and Literacy Challenge in half a minute.

“He’s probably had a lot of bras thrown at him, but nobody’s made him a mullet cake,” Kendall says. “Those little things that you giggle about just keep you going.”

In the end, Miley Cyrus agreed to tape a video greeting in support of the effort, and when the American Eagle and Literacy Challenge had its national fundraising kickoff at Downtown Disney in April, two of her costars, Emily Osment and Mitchel Musso, were on hand to help.

There were other successes, as well. Florida Lt. Gov. Toni Jennings agreed to serve as the group’s state literacy ambassador. Florida Gov. Jeb Bush declared June 20 Bald Eagle Day, and his counterparts in 29 other states followed suit. Elementary school students from across the state entered the essay contest and the winning submissions were published in a thick volume, which the committee sold to benefit the governor’s Florida Family Literacy Initiative. Radio Disney hosted one of the group’s events, which was attended by NASA astronaut Capt. Lee Morin. A group of Timberlin Creek students taped a Radio Disney show about their project. And perhaps most impressive to the students, a trained bald eagle named Challenger visited their school and flew overhead during one of the events.

“It was a blessing to have Challenger come fly to our school. It really was up close and personal for the kids who realized, ‘Wow, this is what we’re raising money for,’ ” Kendall says.

From the start, the PTO hoped was to create something big and then send it off into the world. Now, a year after launching the effort, it seems it has reached that final goal. The Fraternal Order of Eagles has agreed to take up the mantle and spread the message nationally.

“The project was carried out very, very well,” says PTO president Sarah Brittain. “It was a group of parents who got together and worked really hard to pull a lot off in a short period of time. Every challenge that they hit, they overcame....Truly, it’s amazing.”