5 Resources To Help You Handle Curmudgeons and Critics 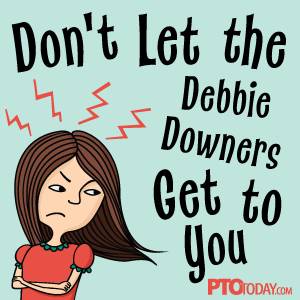 There’s a day for just about everything, and today is National Get Over It Day. This made me think of my days as a PTO leader and how there were times when I would have loved to have told some particularly difficult people to just get over it and move on. And picture that said through seriously clenched teeth!

It’s likely that most of you have felt the same way at some point in your time as a volunteer. There’s no escaping it—there will always be a few parents in a school community who complain too much, one-up other parents too often, always have a better idea (but no desire to actually implement it), are just plain sour about everything, and in general, bring a negative energy to the parent group.

As much as we wish these folks would just get over it (or go away), they often don’t. But they don’t have to get you down, and they definitely don’t have to define your group. We have lots of resources to help you handle them:

How To Deal With Difficult People: This article suggests that if you have a one-on-one conversation with a parent who’s being cranky and acknowledge that she’s upset (you don’t need to agree with her), you may come to understand why that person is being so difficult. You may even be able to work out a solution with her.

Responding to Criticism: Ever have a parent nearly ruin a meeting because he seems to be spoiling for a fight? It’s best to resist the urge to toss back a verbal barb. This article gives you tips on how table your emotions. Often, when you don’t take complaints personally, you’ll feel less threatened by them and more able to respond.

How To React to Critics: Written by PTO Today founder Tim Sullivan, this article suggests that when you have a complainer on your hands, smile right back at this person and say thanks for the feedback. When appropriate, ask her if she’d like to join the planning committee for the event or program they critiqued.

Manage Personality Conflicts: This article provides tips on how to identify personality types and match people to jobs and partners that best suit them. The idea is to prevent problems before they start.

Keeping the Peace in Your PTO: This article expands on the idea that leaders can help prevent problems before they start. It suggests leaders communicate often with parents so they don’t feel out of the loop. Often, speculation and negative feelings will crop up when parents don’t know what’s going on. This doesn’t always prevent those parents (you know who they are) who claim they never got the email. But it’s still worth a try.