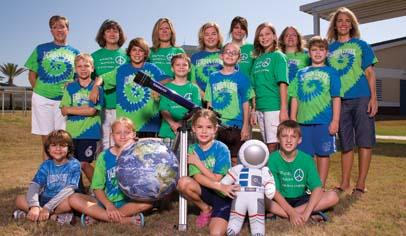 PTO Today's 2010 Parent Group of the Year for Outstanding Family Event developed a fun, multifaceted evening with an academic theme, a student-led science fair, and lots of support from local organizations.

Charged with creating a science-theme night for families, one Jacksonville, Fla., PTO developed an ambitious and creative evening centered on outer space. The multitiered event attracted more than 700 people and drew raves from parents and students alike. And thanks to strong support from local businesses, the group did better than break even by charging just $2 admission. Those factors all helped earn Durbin Creek Elementary PTO recognition for Outstanding Family Event in PTO Today’s 2010 Parent Group of the Year search.

The “Out of This World” Family Night Out featured a mini science fair on the planets led by 5th graders, a demonstration about asteroids, hands-on activities to teach children about the Hubble telescope, a laser light show, and the opportunity to look at planets, the moon, and even the sun through large telescopes provided by a local astronomy society.

Planning began when the PTO was asked to create a family night that complemented the 975-student school’s science curriculum. At an initial brainstorming session, one parent exclaimed, “Ooh...let’s call NASA,” and another said, “Let’s get telescopes.” This synergy became contagious as the group of volunteers tried to figure out ways to make the night not only memorable but also full of fun educational experiences for everyone, from all of the K-5 students to parents and staff, plus draw in the school’s business partners.

“This PTO gets a wild idea, laughs about how impossible it is, and then figures out how to make it happen,” says Patricia Falaney, principal of Durbin Creek. “They are creative beyond belief.”

And they did make it happen. One call to NASA, and the PTO had scheduled an educator for the event to teach kids about the Hubble Space Telescope and the Kepler telescope, which was launched into space in March 2009 to search for other planets. Members of the Northeast Florida Astronomical Society donated their time, expertise, and several giant telescopes so families could take a closer look at the evening skies. NASA provided special filters to allow people to look at the sun, as well. Mad Science, which provides enrichment programs for schools and had already worked with Durbin Creek, set up an area to teach kids about asteroids and their impact when they hit a planet.

The event took place on a Friday evening from 6 to 9:30. Fifth-graders each researched a particular planet ahead of time and made papier-mâché models and displays. For part of the evening, they stood next to their planet displays and helped other students learn facts about space. Students filled out Mission Possible “training manuals” and were asked to gather specific information at each display. When a student completed his manual, he received a space-oriented prize from one of Durbin Creek’s business partners. These included alien figurines, space pencils, stickers, tattoos, and bookmarks. Other prizes included admission tickets to the Kennedy Space Center and local museums.

The PTO enlisted 18 business partners to support the evening. They were in front of families all night during the event and listed in all the promotional materials. Although “Out of This World” wasn’t billed as a fundraiser, because of the attendance (700-plus) at $2 a person and help from the business partners, the PTO came out $300 ahead.

“We wanted the admission charge to be minimal, and we took preorders so we’d know how many people would be there,” says Angie Conlan, Durbin Creek PTO’s corresponding secretary.

School started on Aug. 23 in 2009, and the Out of This World event was held on Sept. 25. That short window didn’t deter the PTO, though. They made phone calls over the summer to secure presenters, then the planning committee met once a week after school started; as the date of the event got closer, they met more often.

During these meetings, Falaney and the PTO officers expressed concerns about the best areas to place each activity and whether there would be enough going on to interest 5th graders as well as kindergarten students. That gave rise to the idea to include the planet showcase. “We made it work, and as it turned out, people didn’t mind waiting in line,” Falaney says. “We had to push them out the door when it was time to go.”

The volunteer effort was more than the PTO ever expected. To help make the family night a resounding success, 50 parents volunteered, 10 teens helped out, and a total of 200 volunteer hours were contributed to the project. “People see us having fun, and they want to be a part of it,” says PTO president Reisha Rust.

Durbin Creek’s family night could easily be duplicated by other PTOs, Conlan says. Any school can put its own creative spin on it and choose science or astronomy themes that are most appealing to their families. While Durbin Creek benefited from being near NASA, the agency will send free resources to schools that want to organize a similar night.

“Once the teachers have the vision, they inspire their students to want to be a part of it,” Conlan says. “When parents understand the concept, they provide reinforcement at home as well as volunteer time to put it all together.”