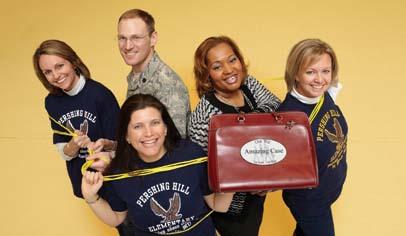 Parents and kids use teamwork, plus their minds and bodies, to take home prizes at this family event.

What do you get when you cross the TV game shows The Amazing Race, Deal or No Deal, and The Price Is Right, mix in some foreign languages, plus have the players on each team tied together at the wrists? Give up? The answer is “The Amazing Case,” an elaborately planned family night featuring fact-finding missions for students and parents.

The March 2010 event was the brainchild of Joanna Bradshaw, president of the Pershing Hill Elementary PTA in Fort Meade, Md. To help make it a success, she enlisted a few good men and women: 12 members of the U.S. Air Force’s 94th Intelligence Squadron. “The school is a K-5 student population that is mainly comprised of military students or those whose parents support the military through government or contracting jobs,” Bradshaw explains.

Approximately 140 people attended the free event, which kicked off with a pizza dinner. Each family team was then bound together by rope before making their way through a dozen different activities set up throughout the school, ranging from math and reading questions to foreign language and physical challenges. At each successful stop, families received a prize and an envelope containing a code letter to help solve a final riddle.

In the “conversion room,” teams were handed a list of supplies that they’d need to purchase. Using a price list, they had to add up the cost of their groceries, then change the total to the foreign currency they were assigned. “For example, some people had to convert into Tanzanian shillings, while another might have to convert into Yemeni rials,” Bradshaw says. In the science room, families used a balloon and an aluminum can to experience a hands-on lesson on static electricity and magnetism. “They would rub [the balloon] on their head, creating enough friction so that it would push the can across the floor to the finish line,” Bradshaw explains. “Watching little kids with their hair sticking up was a hoot.”

Participants also got to dabble in Chinese, Russian, and Swahili thanks to the military personnel, who volunteered as interpreters for the night. (Bradshaw’s husband, Chane, manned the Swahili room.) Students and parents had to translate foreign terms into English to receive the clue envelope. Partway through the night, families were untied to compete in relay challenges involving jumping jacks, push-ups, Hula-Hoops, and jumping rope.

The first three families to finish all 12 challenges successfully and decode the clues for the riddle’s final answer were the winners. Each won a stash of board games, which Bradshaw hopes will encourage continued family time at home. The PTA also raffled off a slew of books and restaurant gift cards during the event.

Bradshaw sees the night as a success on two fronts: It brought families into the school, and it created community between Pershing Hill’s two enrollment areas, which span 6 miles. Another school even contacted the PTA for information on hosting their own event. Bradshaw is happy to share her group’s Amazing Case files, along with some advice: “Don’t do the conversion room—that was really hard!”

The ties that bind: After families enjoyed a free dinner, Pershing Hill PTA president Joanna Bradshaw announced that they would be tied together to compete in the night’s challenges. “Watching parents’ faces was priceless,” she says. “They were like, ‘Are you kidding me?’”?Team members were untied for certain activities.

Thrill of the case: Attendees received briefcases, which were crafted by PTA volunteer Shannon Tingue. “She used a folder that she spray-painted black and then added handles. They turned out awesome,” Bradshaw says. Parent leaders spent about six weeks planning the event, with 16 volunteers on hand that night.

Riddled with fun: After successfully completing a challenge, each team received a small prize along with an envelope containing a letter clue to add to their briefcase. The 12 letters could be arranged to form the answer to the puzzle:?“A successful student is a FAMILY AFFAIR.”