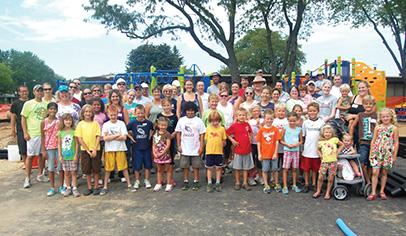 How one group transformed a run-down school playground into a place to be proud of.

Students at Gompers Elementary in Madison, Wis., have a lot of space to play at recess, but until recently, they weren’t having much fun on the playground.

Original steel play structures dating back to the 1960s dominated the space and inadequate drainage created vast puddles that lingered, often making the playground unusable. In winter, slippery sheets of ice would form. There was a definite need to address safety issues as well as a strong desire to improve play components for students and create a fun space they and the entire community could enjoy.

In 2010, Gompers’ enterprising PTO set out to address the drainage problems and update the playground. Abundant land aside, everyone agreed that the play area’s deteriorating equipment and landscaping woes were a source of real embarrassment. It took about two years and $45,000, but now students have a fun, safe place to play, and the improved grounds are a source of pride for the school community.

Involving the community was the first of many major decisions the Gompers PTO made in its bid to build a new playground. For the majority of parent groups, a playground project is a time-consuming endeavor and likely the most expensive one they’ll ever take on. Gompers PTO leaders spent almost a year planning theirs and another year raising funds before the August 2012 installation. The PTO saved on construction costs by assembling a corps of volunteers, commonly referred to as a community build project. Their careful orchestration of a project for and by the community resulted in people being engaged from the onset.

Renae Huffman and Jeanette Paulson, who served as PTO copresidents during those two years, credit much of their success to an extensive business plan called “Growing Together” that was drawn up at the beginning. Starting in November 2010, they labored for several months over the blueprint, which lays out five phases of development. The document outlines their needs and includes such items as a mission statement, some history, a timetable, volunteer coordination plans, a proposed construction schedule, a budget, and funding information. It’s all complemented by photos and illustrations.

“It’s helped us be able to articulate our overall goals along the way,” Paulson says. “It’s something we go back to often when we’re writing grants. And I think it’s helped folks who want to invest in this effort see we’ve put in some work...that there’s a long-term plan.”

While creating the business plan, the playground committee worked with the school district to identify preferred playground vendors. They selected a local playground design and equipment distributor for the project, Gerber Leisure Products Inc. Committee members coordinated closely with the company to develop plans for the outdoor space.

Phase one was to establish a school and community garden, and phase two was to build the new elementary playground. Both are now in place. Huffman and Paulson remain actively involved as the PTO pushes on to complete phase three, a playground for the middle school that shares the same campus. Later will come phase four, a fitness track with stationary components for adolescents and adults in the community, and then phase five, updating several sports fields on the property.

The completed elementary play structure has several wheelchair access points and adaptations for children with disabilities, accommodations that come courtesy of Huffman’s expertise—she’s a social worker for adults with mental disabilities and traumatic brain injuries. The project also benefited from Paulson’s grantwriting skills; her day job is directing a large early-childhood nonprofit organization.

The Gompers PTO received two grants totaling $22,500 for the elementary playground. They worked closely with the Foundation for Madison’s Public Schools to secure tax-deductible status for incoming donations. They relied on gifts from individuals and businesses as well as the proceeds from several community fundraisers to round out the financing for the playground project.

Effective public relations and marketing were key. In addition to sharing their business plan, the Gompers PTO leaders employed several other attention-grabbing strategies, both new age and old-school. These included creating a video and posting it to a website developed exclusively for the project, and assembling a brochure about the plans and distributing it throughout the community.

The longer a project takes, the harder it can be to maintain a community’s interest in it, especially as children advance through the grades; it could happen that they’ll outgrow a playground before it even gets built. The Gompers PTO kept families engaged by reporting progress on a Facebook page created for the project and charting the money raised on a giant thermometer sign mounted in the school lobby.

Momentum built, and a sense of enthusiasm was palpable at school and community events organized to raise money. A silent auction and carnival brought in more than $6,000. Coin drives within the school and bake sales scattered throughout the year netted an additional $2,000. Family nights hosted at area restaurants gained a percentage of the money from food sales for the cause.

Students weighed in with their opinions on the new playground’s design, poring over play structure catalogs and discussing possibilities with committee members. There were a lot of requests for slides, as most of the old slides had been removed for safety reasons. A variety of climbing options were also favored. Mostly the students wanted enough to do so that entire classes could be involved all at once.

Two slides found their way into the final design, among other components that include a rope bridge, a very popular climbing wall, multiple items to hang from and/or swing from, and a hugely popular sit-in spinning device. In a frugal move, the PTO salvaged a tire swing, swingset, climbing blocks, and seesaw from the original playground and successfully incorporated them into the new installation.

Shortly before the community build, every piece was finally in place. The school district had removed the old playground equipment and completed drainage work on the site. A design had been approved. The money had been raised. Construction was set to begin, but then came the inevitable bump in the road.

The small construction company the PTO had lined up dropped out a week before the scheduled build day; apparently the company hadn’t realized the extent to which volunteers would be involved in the build. “We were absolutely devastated,” Paulson says. “But this is when you rely on neighbors and others. An individual in the community connected us with another construction company who proved to be lifesavers.”

The day of the build also saw entire families turn out to assist—moms and dads, grandmas and grandpas, aunts and uncles. Upward of 100 people came throughout the day to help build. “I think it’s really provided a different sense of how those people are now connected to that space,” Huffman says.

If there’s one thing parent groups underestimate, it’s the amount of time and people power that a project like this will ultimately require. “It takes a small group of individuals to coordinate and move things along but then you must rely on a much larger group of volunteers to handle the task. You’ve got to get a lot of committed individuals involved,” Huffman advises.

The secret to the Gompers PTO’s success appears to lie in its ability to provide a little something for everyone. The far-reaching plans in place for the extensive campus have elements that appeal to students and parents, as well as neighbors without ties to the school. The group’s fundraising efforts also provided a variety of ways for people to support the ambitious project.

Whether a playground project is grand or small, veterans Huffman and Paulson offer this advice for success: Build in extra time, be flexible, and celebrate the small successes along the way.

6 Keys to a Successful Playground Project