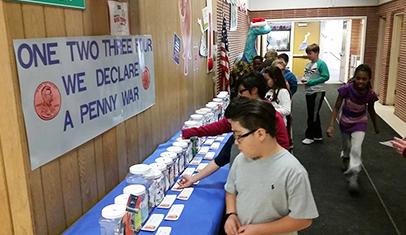 A penny war is an easy way to make some quick cash for your school or another cause.

Penny wars, also called coin wars, coin drives, and penny drives, have grown in popularity as lucrative fundraisers that are easy to organize. In addition to netting some substantial cash quickly, a penny war fundraiser builds spirit and promotes friendly competition—not to mention encourages lots of student participation. As well, a penny war can serve as a standalone fundraiser or be part of a larger effort.

Pin these quick steps to get started fast, or keep reading below for more detail. 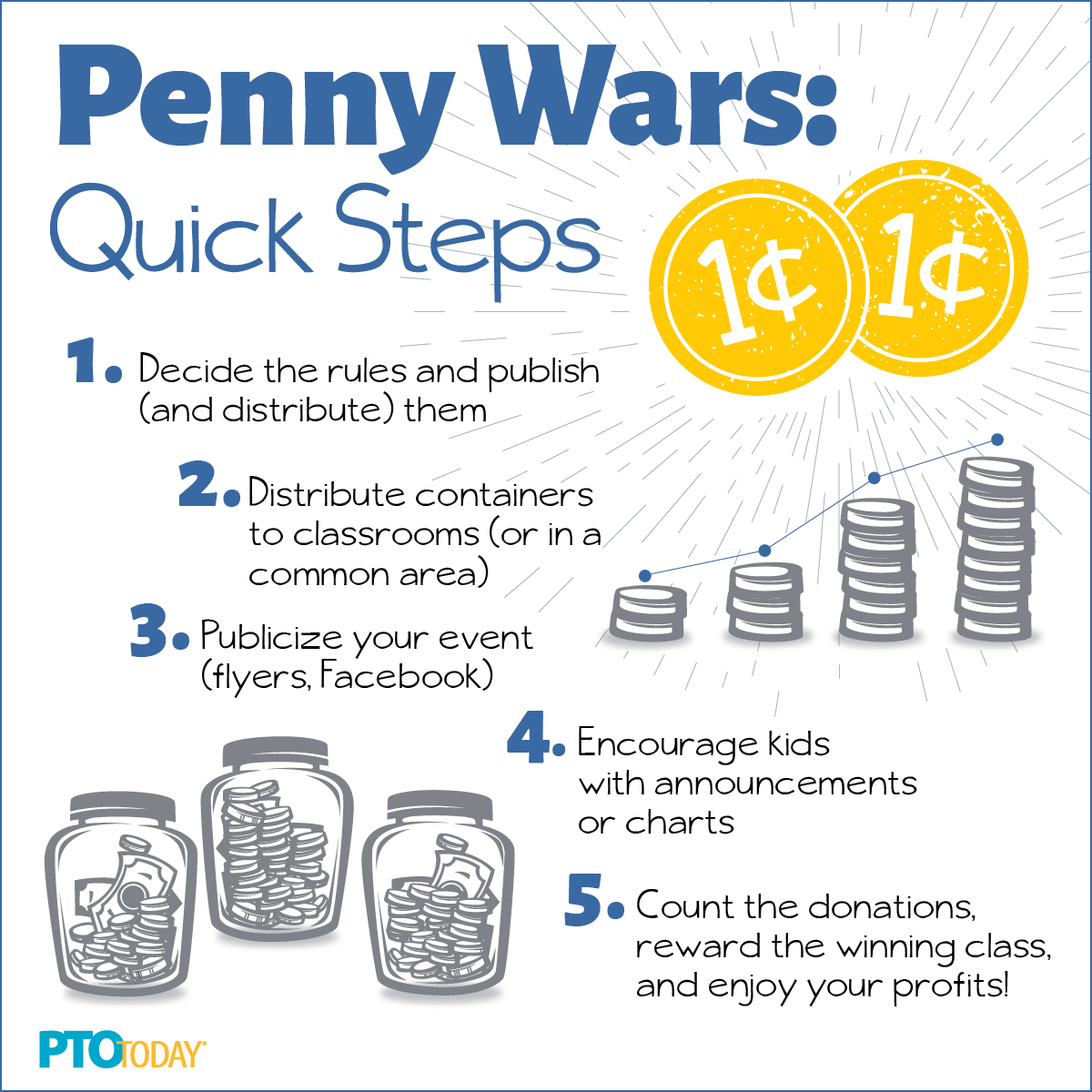 The basic premise of a penny war fundraiser is that kids bring spare change to school for a set period of time, usually a week or two, and deposit it into containers. At the end of the collection period, the change is typically donated toward a cause or for a purchase within the school or to an outside charity, and the class that netted the most is rewarded.

There are lots of ways to run a penny war fundraiser, and discussing and deciding on the rules are steps your group will want to take at the start. Some popular rules variations include:

Positive pennies: Each penny is worth one point and counts “positively” toward a group’s point total; each silver coin or dollar bill gets points based on its value (a nickel is worth five points, a dime is worth 10, etc.), but counts “negatively” toward other groups’ totals. So in a competition between classrooms, students who want their class to win will place pennies into their own buckets and place nickels, dimes, quarters, or dollar bills into other classrooms’ buckets. In some penny wars, dollar bills are counted positively along with pennies.

Negative pennies: For the penny war at Whittier Elementary in Downers Grove, Ill., positive points were given based on the value of each silver coin (for example, a quarter was worth 25 points) and one point was deducted for every penny. Students strategized by saving up their pennies and dumping huge amounts into the buckets for classes that were ahead—one student even brought in rolled pennies from the bank!

What to use to collect the coins: While any large container will do, some that work particularly well are empty water (bubbler) bottles, gallon-size milk jugs, and large snack containers (such as those come from warehouse stores with pretzels, cheese puffs, etc.). 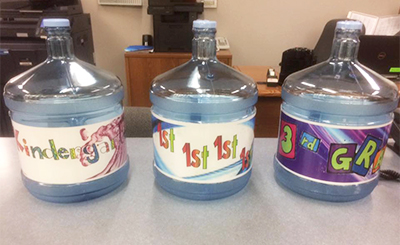 Where to set up the containers: Organizers will frequently provide each participating classroom with containers and gather them at the end. But depending on the size of your school, the number of grades, and the number of classrooms per grade, they can also be organized by grade in a central location.

Where and how to count the coins: It’s the obvious end result, but worth considering beforehand. For one, the containers can get quite heavy; and not all banks are willing to count a large quantity of coins. Options include enlisting volunteers to hand-roll the coins or taking the coins to a supermarket that has a coin-counting machine. Some groups choose to invest in a coin-counting machine, particularly those that plan to announce classroom tallies during the penny war or that plan to fundraise with penny wars again in future years.

By their very nature, penny wars don’t require a lot of advance notice for kids to participate—all students need to do is bring in some change. But you’ll still want to make families aware of the activity on your website and Facebook page (and other social channels, if you have them) to give them time to save up their coins. And you’ll definitely want to share the rules ahead of time. Use our editable sample flyers to promote and explain your penny war. 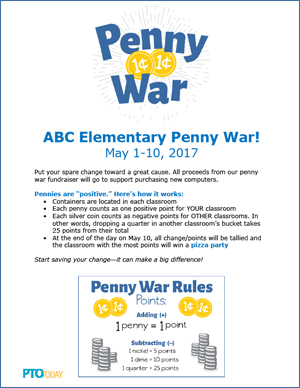 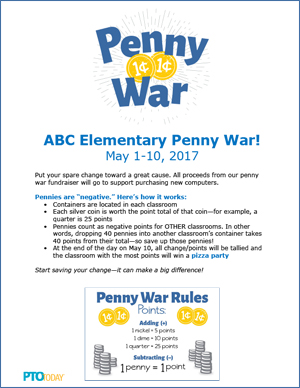 Often, just providing containers and incentives are sufficient to get kids’ competitive juices flowing. But a theme always adds a fun element. Following are some school-tested penny war themes.

Piggy “banks”: The PTO at South Range Elementary in Canfield, Ohio, had success with a “Pack the Piggies” theme by painting large water bottles pink (to represent pigs) and setting them up in a row, by grade. 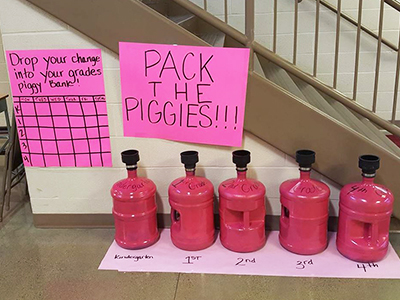 Holidays: For a March fundraiser, the Oakland Park (Fla.) Elementary PTO held a St. Patrick’s Day-theme coin drive. Coins were collected in shamrock-decorated containers, and one of the prizes at the end was a green pot filled with gold coin candies. Achieve a similar effect by picking any favorite holiday and decorating to match. 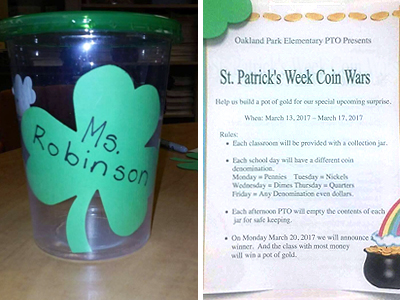 Cake in the face (or other teacher/admin stunt): Set up two or more large coin containers, each with a person’s photo on the front. The principal, vice principal, beloved teacher, or other well-known school figure are all good candidates. Kids vote with their coins, and the “winning” container earns a pie planted in that person’s face—which is what happened to West Carrollton (Ohio) Middle School principal Doug Mescher and assistant principal Korinne Toadvine as part of a penny war fundraiser to benefit the Special Olympics. 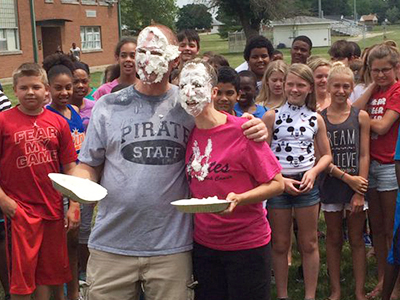 Adapt the ideas in “Fun Principal Incentives To Motivate Students” for other ways to get your principal in on the fun.

Depending on the length of your penny war, you can help keep momentum by playing up classes’ progress, either during morning announcements or via fun visuals displayed in a central location in the school.

The Whittier Elementary PTA updated its board daily with class totals, using big numbers to indicate which classrooms were in first, second, and third places. 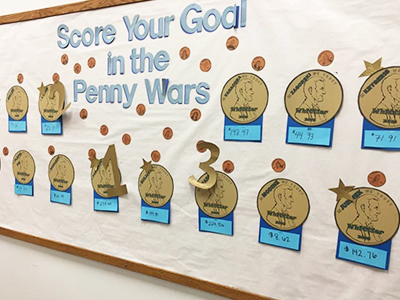 This poster board made by the Joseph H. Saunders Elementary PTA in Newport News, Va., provided students with a visual representation of how its penny war points were tallied, how to raise money, and even what the money would be spent on. 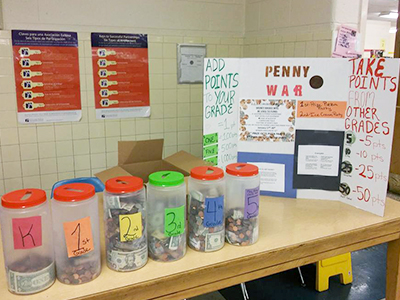 Kenyon Woods Middle School in South Elgin, Ill., held a penny war as part of a larger effort to raise money for hunger. Visual incentives included a filled grocery cart to show students how their coin donations were making a difference. 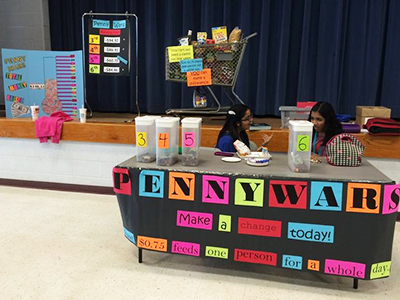 And a progress thermometer, like this one used at Coleman Elementary in Elgin, Ill., to mark students’ efforts toward their goal to raise $500 during a penny war for hunger, is a simple and effective way to keep participants up to speed. 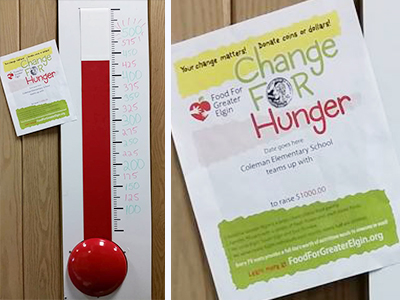 Some groups offer small daily prizes to the class that collects the most each day, determined by weighing the containers or counting the coins daily. Because the grand prize is based on the effort from a whole class of students, all-class incentives tend to work best for penny wars.

Get additional ideas in “Low-Cost Incentives for Your Next Fundraiser.” 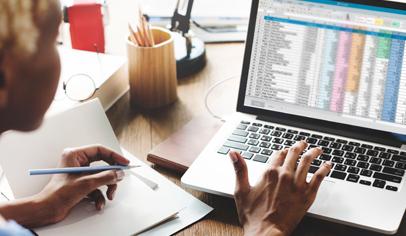