Adversity: Saving the School They Love 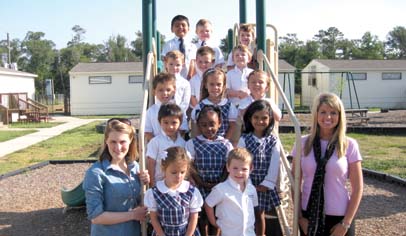 When parents found out their school would be shutting down just a month later, they stepped up to raise money and run the school, receiving the 2011 Parent Group of the Year award for Outstanding Effort To Overcome Adversity.

Following a stunning announcement just before Thanksgiving that their school would close in December, parents at Holy Trinity Episcopal School in Houston banded together to save it, becoming the school’s business managers, janitors, and groundskeepers. They also raised more than $200,000.

The group’s initial goal was to keep the preK-12 school going through the end of the school year. When the first few weeks of fundraising brought a positive response, parents realized they could put Holy Trinity on a path to long-term success.

“We worked so hard,” says David Foret, who serves as project manager for the PLG. “I forgot I had a business for two months. Holy Trinity engulfed us. There was no option for defeat.”

At his corporate training company, Foret examines problems, comes up with solutions, and then executes those solutions. Until last year, Foret had never used those business skills in his role as a parent at the small private school; he was busy coaching the girls’ basketball team.

The email he received about the school closure changed that. Foret and other parents were shocked to read that the 110-student school would close at the end of the first semester as a result of financial problems. A meeting the next day reiterated the board decision as a done deal, devastating parents whose kids were thriving.

“My child had been there five years, and he had really excelled,” says Foret, whose son, Trystan, was in 9th grade last year. “I wanted that school there for him, and I wanted those rug rats in preK, K, and 1 to get the same opportunities my son had.”

After the meeting, parents tried to accept the news, but they couldn’t. There are few other private schools in northeast Houston, and Holy Trinity’s atmosphere was not something they thought they could find elsewhere. Most important, their kids were happy.

So parents decided not to accept the news. Instead, they joined forces, combined their formidable business skills, and went to work to save Holy Trinity. Within 10 days, the campaign had gathered more than $200,000 in pledges. The head of school solicited a single donation of $150,000, and a story on the local news brought in another $50,000 in large and small contributions.

“It was absolutely awesome to look to the parents sitting next to you and decide to roll up your sleeves and come up with solutions,” Foret says.

Raising money was the most critical step, but there was much more work to be done. Holy Trinity needed a more targeted marketing campaign, ensuring enough students and tuition dollars to cover expenses. Parents needed to explore options for financial relief, such as the sale of land owned by the school. The board of directors needed an overhaul. The administrative team needed additional members. And parents needed to provide services they once took for granted: mowing the grass and waxing the floors.

There were conference calls and meetings that went on for hours. Parents focused on identifying the skills they had and figuring out how those skills could be used to rescue Holy Trinity. “With this parent group, there was a lot of talent,” says Xraka White, whose world became centered on saving the school her then 1st grade son, Ethan, adored. “We had parents skilled in project management, accounting, sales, and negotiation.”

White led the marketing work group. She and the parents who served on the work group became visible in the community, talking up the school and recruiting families into the fold. Work group members attended a book fair, a parade, and a neighborhood fair. Volunteers designed the school’s website, initiated a direct mail and newsletter campaign, and encouraged all parents to sing Holy Trinity’s praises in their neighborhoods.

Their efforts paid off.

At a carnival, Holy Trinity parents and students led other children in craft activities, giving them an opportunity to promote the school. “We spoke to the families of more than 700 children who completed our craft activities,” White says. “Over 50 families expressed sincere interest in being contacted by the school for information on enrollment. New contracts have been signed as a direct result of these efforts, and tours are being scheduled daily for prospective parents.”

A parent with a background in fundraising met with former donors and board members to establish “a culture of giving time, talent, and treasure to the school,” White says.

As White brought more and more parents into the effort, she noticed the culture at the school changing. “More parents are involved,” she says. “And we are getting still more parents involved.”

Holy Trinity has always had the Trinity Volunteer Association, which organized spirit nights and classroom volunteers. But members were not engaged with the business operation of the school, leaving that to the board of directors. That will not happen again, White says. “I can’t be surprised anymore,” she says. “I need to know what’s going on so I can always be prepared.”

During the crisis, the PLG partnered with the Trinity Volunteer Association, tapping their members’ talents and making sure school life for the students was unchanged.

For White, one of the hardest aspects of that time was maintaining a sense of normalcy in front of Ethan. “I didn’t want to make an adult problem my child’s problem,” White says. “He smiles from 8 until 3 because he loves his school so much.”

As the marketing work group brought in new families, other parents dug deeper into the school’s business operations. Parents negotiated with the school’s vendors, wiping clean $160,000 in unpaid bills and making arrangements to pay the remaining balances.

Jayson Link, whose son, Xavier, was in 1st grade, knew the team had pulled off the unthinkable when Holy Trinity ended the school year with a positive cash flow. “It was a titanic effort to get us from point A to point B,” says Link, who started out as a project manager for the parent group and has since joined the school’s board of directors. “I am truly humbled by the effort parents made to make this happen.”

Link was especially moved by a father who, along with his daughter, committed to cleaning the school two nights a week through the end of the school year. As was the case with several Holy Trinity families, the father had decided to transfer his child to a different school in the fall. “Yet he honored his commitment to Holy Trinity up to the very last day,” Link says.

Looking back, Link marvels at how many well-timed miracles had to occur for the school to keep its doors open. Despite the many pledges in donations, at one point early on PLG leaders thought they weren’t going to be able to come up with enough cash. Link was going to start letting parents know they just couldn’t cover operating costs.

Just then, the school received an email from an anonymous donor offering enough money to bridge the gap. “It’s always surprising what people will do,” he says. When a story about the school’s plight aired on local news, someone made a $40,000 donation.

“It’s an exciting thing to say I was a tiny piece of this,” Link says. “To get in front of those kids and tell them they could come back after Christmas was overwhelming.”

During those first uncertain two months, Link calculated that parents put in more than 1,500 hours of volunteer service. Now, the parents are looking ahead to a bright future for Holy Trinity. They are reorganizing the board. They have hired a development director and business manager. Parents are happily planning events and helping teachers with classroom projects. And they’re also watching the bottom line.

Digging out of a Financial Hole

It can happen to your private school, your charter school, or even your parent group. Leaders take their eyes off the accounting, and soon the organization is in bad financial shape. Here are tips to get back on track from the PLG at Holy Trinity Episcopal School.

Remain calm. Finding out that your organization is in financial trouble will understandably trigger emotions. Put those emotions aside when you gather to focus on how to fix the problem.

Study the problem. After assembling a core group of volunteers, take time to study and clearly define the problem before talking about possible solutions.

Work hard. Once you have a plan, execute it! Convene core leaders and committee chairs to make sure that everyone is moving forward.

Plan for the future. Once the immediate financial crisis is resolved, start building a solid foundation so your organization can remain financially healthy.