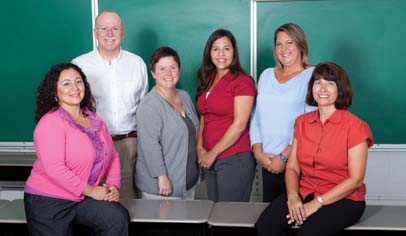 The 2011 National Parent Group of the Year overcame a huge economic challenge and a disorganized past to come back as a primary source of support for its community.

A town facing a severe economic blow and a parent group in disarray were the challenges facing the Oak Park Elementary PTO a year ago. But this group—PTO Today’s 2011 National Parent Group of the Year—overcame those obstacles. Through creative outreach to parents and unifying service projects and family events, they built a true parent community.

Located in Titusville, Fla., Oak Park Elementary has 630 students in preK through 6th grade. More than half of these students live at or below the poverty line, and the economic pressures facing families intensified with the end of the NASA space shuttle program, which resulted in the loss of thousands of jobs in the community. Within the school, the PTO was struggling, too. The previous president and vice president had worked hard on fundraising, but there was very little parent participation.

Reaching Out to Parents

A new group of officers was elected at the end of the school year; however, they weren’t notified until July, just before school started back, and then the new president resigned in October. Yet this new team got right to work, establishing one overriding goal. “We felt it was really important to build relationships, and once they were built, people would come, and then the money would come,” says Misty Belford, who stepped into the presidency. The group’s first efforts were a campus cleanup day, which about 10 families attended, and a faculty welcome-back breakfast.

Pretty quickly, parents got a sense that the PTO had changed. “A lot of problems were solved by our immediate visibility in the school,” says director of communications Traci McGough. “We focused on becoming a more welcoming presence rather than having people put off by the PTO. We struggled with not wanting to pressure people. We knew perception was everything. We wanted to welcome people into the PTO environment without their automatically thinking they’d have to put gloves on and get to work. And we didn’t want to seem cliquish. We don’t want to be that group of established friends that do things and no one else can come in.”

So the PTO officers donned name tags at registration and open house, where they talked to as many people as they could, asking them about their children. And the PTO used incentives, such as offering freebies to entice parents to stop at their registration table. “We found a lot of people were apprehensive about coming to the table,” Belford says. “We tried to get them as they were walking away, saying, ‘Did you get your free pencil and eraser, and this is what we’re doing.’ ” About 200 parents stopped by to enter their email addresses on a computer.

Then the group got organized, creating its first-ever set of bylaws, which were presented at the first PTO meeting of the year. “One of the things that it was important for parents to understand was that we were their PTO and the funds were their funds to decide on,” Belford says. “We put into place procedures that we couldn’t spend money without a vote of approval from the parents, along with the process to bring new officers in. The bylaws established some validity to the organization.”

Before the first meeting, officers called those parents who had expressed interest in the PTO to issue personal invitations. “We were afraid people would be aggravated we were calling,” Belford remembers. “But it helped get people to the meeting, and a lot of people commented that they had wanted to get involved but didn’t know how.”

People who couldn’t make it to the meeting could participate virtually through a website that offers a free Web conferencing tool. The Oak Park PTO doesn’t use the site’s video tool, but they do use audio and screen sharing so that online attendees can hear discussions, view the PowerPoint slides, and type in questions or comments. Six individuals attended the first meeting this way, including faculty members who preferred not to stay late at school for the meeting and parents with sick children.

The PTO also set up focus groups to ask parents what they were doing well and what improvements were needed. Parents said they liked the child care offered at meetings and getting information via email. One suggestion was to make it easier to volunteer, so the PTO started using a website for volunteer sign-up.

To recognize those who helped, a new position—PTO volunteer recognition coordinator—was created. This person sends individualized, hand-written thank-you notes to every volunteer at each event, as well as birthday cards for teachers. Births and deaths are also recognized. Even students receive thank-you notes with stickers for their participation. Although this turned out to be quite a job, the group feels committed to continuing this new tradition, and the feedback has been tremendous.

To further build community, the parent group hosted weekly grade-specific ice-cream socials. The PTO provided the ice cream, with room parents donating the toppings. Some parents came to watch their children perform a song they’d learned from the music teacher. The events were well-attended, providing a chance for PTO officers to meet more parents.

In its grandest effort to bring everyone together, the PTO tried a new family event: an outdoor movie night. Although the weather was unusually cold for December in central Florida, the free showing of How the Grinch Stole Christmas on the school’s paved play area drew more than 500 people, many of them wrapped in blankets to stay warm. Holiday music played over a public address system, holiday lights decorated canopies, and student-created sidewalk art directed families to the viewing area.

Amidst all the new events, the group kept one popular service activity that had been started the year before: a clothing swap. Parents brought in clothing that was in good condition but no longer useful for their families, receiving a ticket for each item. An estimated 5,000 items filled the cafeteria for the Saturday event. Attendees could get a free clothing item for each ticket, and they could also buy items for 25 cents each. Families in need were given tickets by teachers. Clothing left at the end of the sale was donated to local Boy Scouts for their garage sale.

“The feedback from parents that really needed that extra help was fantastic,” McGough says. “A lot had so many kids that they couldn’t afford new clothes, or the kids needed jackets, or the parents had a problem keeping their kids in good shoes. Even older adults came who needed to buy something for themselves.”

All of these efforts have restored a sense of community to the school, and the results are obvious. “Our PTO is an integral part of our total school program,” says principal Ron Dedmon. “They have had a mission to establish a program with a strong emphasis toward building trust and relationships. Because of their dedication and commitment to the school community, involvement has increased dramatically.”

Looking back over the accomplishments of the year, McGough is one parent who has come to view the PTO differently. She admits that before becoming involved in the PTO, she had the perception that it was “somebody else’s job.”

“But I realized this is everybody’s job,” she says. “We’ve tried to relay that to working parents—that you can be involved and not feel that you’re giving up all of your personal time. Being part of the PTO has been the most gratifying and satisfying experience I’ve had in a long time.”

The Oak Park Elementary PTO has used technology to improve communication, increase parent participation, and get feedback. Here are some of their most effective tools.

Facebook: The social networking site is used for announcements. For instance, a note about a school cleanup day before school started attracted 10 families to attend.

Computer at registration: More than 200 parents entered their email addresses into a computer at the PTO table during back-to-school registration.

Online volunteer sign-up: The PTO uses a website for volunteer sign-up. Parents can volunteer for short periods of time and see who else has signed up for different tasks. The site also makes it easy for the PTO to track volunteer participation.

Web conferencing for meetings: The use of a web conferencing service allows people to participate in PTO meetings from home. A future goal is to archive meetings so that anyone who missed a meeting can remain informed.

Website: The PTO’s website contains links to all of the above, along with a teacher suggestion box, monthly budget updates, a discussion board, newsletters, calendars, forms, minutes, bylaws, photos, and more.

# Lisa 2012-09-10 17:56
Does anyone know what the online volunteer sign up website was? I would love of integrate this into out PTO! Great job to this group!
Thanks!
Refresh comments list
RSS feed for comments to this post