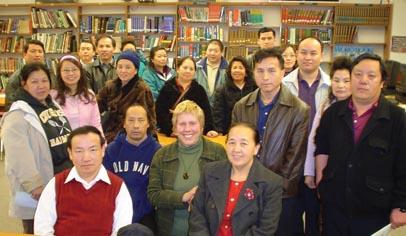 Is it practical to have two distinct and independent parents groups at a single school, one a traditional PTO for the mainstream population and the other to engage parents from a particular ethnicity? Could this structure actually succeed, or would it be counterproductive to building broad-based involvement from all families? We spoke with Ann Mickelson Hebble, a teacher in the English-language learners program and founder of the Hmong PTO at Murray Junior High in St. Paul, Minn. She told us about her unique parent group and the Hmong families it serves.

Give us a little background about the Hmong.
The Hmong are farming people from Laos and Thailand, many who were displaced by the Vietnam War. Their religion is based on elders and the spirit world. They’re devoted to the success of their students and are very allegiant.

Why was a separate parent group created?
Twelve years ago, when I was hired as an ELL teacher, I thought it would be a good idea for these families to have their own group and have them be an integral part of their children’s education. They did not have any real access to school.

What’s the structure and function of this PTO?
The group has no formal officers. We’ve asked parents over the years to take on those roles, but they never have really taken an interest. Essentially, we are a forum. Hmong parents are hungry for information about the Internet, truancy, and discipline procedures.

Are events held just for Hmong families? What are they like?
We don’t exclude anybody. We did try mixing both sets of parents at our annual potluck dinner, with not much success. Language presented a problem for the groups interacting. [But] they know how to throw a party! Food is the connector; you cook for the masses and you make it your best.

Do issues ever come up that this is an ethnocentric group?
We do get asked on occasion, “Where’s the Mexican PTO, or the Somali?” You do the best with what you have. That’s where we put the resources—to the biggest group.

Are there involvement challenges at Murray specific to Hmong culture?
The Hmong alphabet used today is only 60 years old, so many older parents are illiterate in Hmong and English. They are not used to living in urban areas. Of the parents who don’t speak English, there is a loss of control with their children as children play the adult role of grocery shopping and things like translating grade reports. Parents are at the will of their children.

School size: 820 students, grades 7-8
Our budget: $1,400
Our fundraisers: School vending machine sales, fees collected at student council dances; also some money from the Principal’s Fund.
Mission statement: To listen to the needs of these parents, allow access to resources that they otherwise would not get, and provide a strong social network.

Meeting structure: Parents get together monthly for about two hours. The first 30 minutes are spent eating and chatting. Discussions are spontaneous and “circular”—rather than simply tabling a topic and moving on, members will talk about the same issue from different angles several months running. Occasionally, guest speakers address subjects like parenting and discipline.

Creating a similar organization: There’s no rule of thumb for deciding whether a particular ethnic population should have its own parent group, Hebble says, but teachers can help the general parent group recognize which ethnicities might need more help addressing their needs.

Tips for success: Arranging food and daycare were vital to bringing families to the school. Parents often attend with their teen children. Hebble also says leaders had to get used to stragglers: “A 6 p.m. meeting could mean anytime during the hour of 6 for these families.”