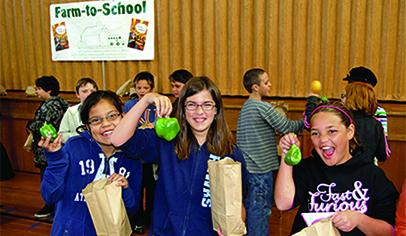 This group's persistence in the face of many challenges earned it the 2012 Parent Group of the Year Award for Outstanding Effort to Overcome Adversity.

Faulty plumbing, an ancient boiler, water damage in the basement—the infrastructure at Cordley Elementary in Lawrence, Kan., may be crumbling, but the same can hardly be said of the school’s PTA. The past two years have seen parent participation swell and campus activities multiply despite the fact that the K-5 school has repeatedly been placed on a short list of potential school closures.

The parent group’s persistence in the face of these challenges earned it PTO Today’s 2012 Parent Group of the Year award for Outstanding Effort To Overcome Adversity.

“Cordley is one of our core downtown schools and it brings together three distinct neighborhoods. It’s a real community touch point,” says 2011-12 PTA president Sharon Ashworth. A small but dedicated group of people have always coordinated activities at the 311-student school, but after surviving round one of the school closing debate, volunteering efforts increased markedly.

Predictably, the school has had its share of budget cuts, which the PTA has done its best to offset. A parent-staffed clerical corps was established to relieve teachers of time-consuming tasks like copying and laminating. The Cordley Volunteer for the Day program was instituted to give time-challenged parents an opportunity for one intensive day of volunteering. This year the CVDs helped out in the classrooms when support staff and paraeducators were reallocated to testing.

The surge of extra energy experienced by the PTA has enabled the group to provide educational enrichment opportunities like after-school language and nature clubs and a before-school marathon club. The farm-to-school lunch program’s goal is to teach kids how and where their food is grown. Students go to local farms and harvest some of the very foods they’ll later eat at a specially sponsored lunch.

What the judges loved: The PTA kept moving forward with enthusiasm and new ideas even when they were uncertain whether the school would stay open for another year.

Cool fact: In 2015, Cordley Elementary will celebrate its 100th birthday! The building has been patched and there have been some additions over the years, but the original structure still stands.