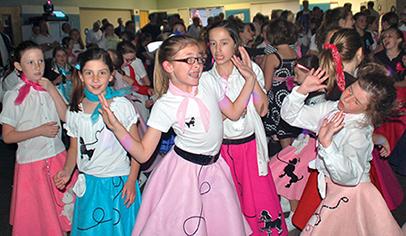 Attention to planning and thoughtfulness led to this group’s selection as Outstanding Parent Group at a Private or Parochial School in PTO Today’s 2012 Parent Group of the Year search.

The Little Rock Christian Academy Parent Teacher Fellowship in Arkansas didn’t waste any time getting ready for a successful new year. The PTF reached out to parents at the end of the 2010-11 school year to help them buy school supplies for the fall—at cost. That way, when students arrived on Meet the Teacher Day, they were ready to learn.

That kind of attention to planning and thoughtfulness permeated everything the PTF did at the 1,400-student preK-12 school, and it led to the group’s selection as Outstanding Parent Group at a Private or Parochial School in PTO Today’s 2012 Parent Group of the Year search.

One of the cornerstones of their work was the PTF Ambassador Program, which matched new students with existing students for summer activities, including pool parties. In doing so, the PTF ensured that no one showed up for the first day of school without knowing at least one other person. They also hosted new family luncheons so parents could make connections as well.

And they didn’t stop there. Several fun events drew families to school. At a ’50s theme father-daughter sock hop in April, girls donned poodle skirts and couples could pose for photos by a classic car. That same month, the PTF hosted a large gathering of grandparents at its annual Grandparents Day. Approximately 1,000 grandparents came to the campus to see a student performance, visit the classrooms, and attend a book sale.

The PTF’s largest fundraiser allowed parents to raise money by doing something they already did—buy groceries. The PTF raised close to $50,000 through a grocery chain’s gift card fundraising program. “All they had to do was shop,” notes PTF president Marijane Pfeiffer. “It didn’t cost [our families] anything.”

The PTF aggressively marketed the program with lawn signs tallying the amount raised each month and a video that explained the program. “You can sit there and tell [families] all day that we raised this and spent that,” Pfeiffer says. “But for me to show them on a big ol’ monitor, it bumped the program from $12,000 to $50,000.”

What the judges loved: The PTF Ambassador Program continued after the start of the school year. Students in the same age groups were invited, along with their ambassadors, to small gatherings where they could meet even more Little Rock Christian Academy students.

Cool fact: At the Grandparents Day book sale, grandparents bought books chosen by students. The PTF had nameplates printed with the grandparents’ names and gave the books to the elementary and middle school libraries. The book sale raised $22,761 and stocked the libraries with 1,000 new books.