Learning on the Playground 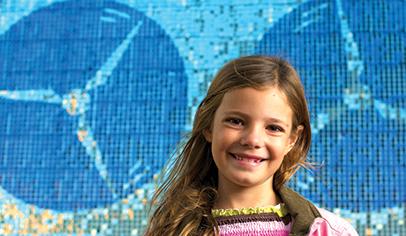 Many school playgrounds today offer more than a place for kids to let off steam—they’re great places for learning, too.

Inattentive students squirming in their seats, stealing sidelong glances out the window—every teacher recognizes these and other telltale signs that recess time is drawing near. Kids need a break, but who says learning must pause the moment classroom work is pushed aside? It’s little surprise that a fair amount of social development occurs on the playground, but increasingly, real physics, natural science, math, history, and even music lessons are happening with the advent of new and innovative designs.

“It’s like we’ve entered a renaissance period in playground design,” says Tom Norquist, a board member at IPEMA, the International Playground Equipment Manufacturers Association. For more than 30 years, Norquist has been involved in designing hundreds of playgrounds. He’s seen them evolve from stand-alone slides and climbing structures to composite play structures. He’s watched playground configurations and materials change in response to stricter safety standards. “There was a frenzied time when everyone sought to implement the new guidelines. Now safety compliance has become the norm and so we’ve entered what I think is a very creative period,” he says.

Playgrounds around the country are showing evidence of this newfound originality. All Saints Catholic School in Norwalk, Conn., has set up a Science and Energy Park on its grounds where every piece of equipment—from the jungle gym to the monkey bars—demonstrates a specific scientific concept and comes with customized lessons. The playground was completed in November 2011 and is patterned after a similar installation at West Parish Elementary in Gloucester, Mass.

With a little guidance, typical playground activities take on a whole new meaning for students. All Saints project cochair Alison Reilly puts it this way: “Instead of just going down the slide, they might think, ‘Hey, this is gravity pulling me down,’ or if we insert a piece of carpet under them they might figure, ‘Oh, this is friction slowing me down.’ A kindergartner on the seesaw will learn about balance, and the child on a spinner can think about centrifugal force.” Lesson plans come courtesy of a science guide the school is in the process of posting online. Unusual items like solar panels, a rain harvesting system, and wind turbines round out the unique learning opportunities offered at this facility, all under the guise of play.

While science concepts seem compatible for playground interpretation, what about some other disciplines? Norquist remembers when school music programs first fell prey to budget cuts and people began asking for playground elements that promoted music. His company completed a historical analysis of musical instruments from around the world, and several were selected and adapted to be built into playground structures. These include bongos and other drums, such as ashikos or djembes. Elementary school music experts were hired to write a curriculum so a music lesson can be taken out to the playground.

Some schools, usually smaller, have opted to move away from manufactured play equipment altogether in favor of more free-form designs that incorporate plant material and other natural elements such as logs, rocks, and sand. Activity in a natural play space is thought to be more open-ended and likely to spark a child’s imagination.

Jim Wike is a landscape architect and design director with the Dimensions Educational Research Foundation, which works with the Arbor Day Foundation to bring such playscapes to fruition. It’s been his experience that very few kids have any personal interaction with plants. He recommends installing a few pots and raised planters, even in a more traditional playground setting. “It gives kids a connection back to space and place,” he says. “And in urban environments, those simple additions have been shown to help children and families buffer stress.”

Of course, many schools primarily look to their playgrounds as a way for kids to get some exercise, help them build strength and endurance, and combat obesity. At least that was the main motivation behind Our Lady of Mt. Carmel School’s decision to begin putting in a playground in 2008. Remarkably, the 68-year-old Meriden, Conn., institution had never had a proper playground up to that point. “We definitely needed one for its physical benefits, but at the same time we’ve come to realize just how much children learn in play,” says Denise Nowakowski, school advancement coordinator.

Schools interested in realizing the full fitness potential of their playground might want to investigate a program developed by the American Association for Physical Activity and Recreation. Through its Play On program, AAPAR offers a complete curriculum for grades K-5 that meets standards set forth by the National Association for Sport and Physical Education. It’s designed to promote strength, endurance, flexibility, balance, and cardiovascular fitness for children of all abilities through the use of playground equipment.

And while there will always be more emphasis on the physical benefits offered by playgrounds, the relative advantages of quiet spaces should never be underestimated. A strategically placed bench or picnic table offers respite for some children from the rough and tumble of play and should be incorporated into every good design. “We’ve noticed that some children will not play,” Nowakowski says. “They prefer to sit on the shaded bench under the landing and just hang out.” By taking these sorts of individual needs into consideration, a playground can appeal to both the introverted and extroverted child.

“There’s a tremendous movement across the country to create themed playground environments,” Norquist says, giving further support to his assertion that this is a time of innovation in playground design. He’s seen seashore-theme playgrounds featuring whales, dolphins, barnacles, and crabs, all intended to spark kids’ curiosity about marine life. Recently he heard about a structure with a Native American theme, great for reenacting social studies lessons or serving as a starting point for class discussions. Some more common pirate- or spaceship-theme playgrounds recall children’s literature classics (think Peter Pan or even the Magic Tree House series), which lead kids to role-play their favorite characters and reinforce language arts lessons.

Considering all the recent innovations and creative energy being poured into today’s playground designs, when children say their favorite subject is recess, it might not be a bad thing!

The answers to these questions are good indicators of whether your school playground engages and challenges kids. If your playground is uninspiring or if your school doesn’t have one in place, visit the International Playground Equipment Manufacturers Association at IPEMA.org and click the link to Voice of Play. The latter is IPEMA’s effort to educate concerned parties about the various benefits of children’s play. It’s a great place to begin.