How To Stage a Successful School Talent Show 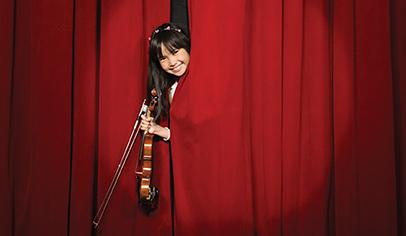 Stories of kids talent shows that sparkled, and tips for holding a great one at your school.

A school talent show can be a great way to showcase your students, build their confidence, and bring your community together. It’s a fun-filled event that appeals to elementary, middle, and high school students.

Yet after a talent show wraps up, volunteers sometimes declare, “Never again.” They cite difficulty in getting students to rehearse, discomfort with choosing which song lyrics and dance styles are appropriate, and the effort required to put on such a large event.

It doesn’t have to be that way.

These three parent groups put on very different types of shows, and they were all successful. Parents had a vision for the type of show they wanted and made decisions along the way that ensured a smooth event. They all left their shows feeling exhilarated, not exhausted.

Here’s how they did it.

“It’s All About Building Up Their Confidence”

Sara Mutal, a parent who teaches an after-school drama program at Arrowhead Elementary in Kenmore, Wash., worked with another parent to start an annual school talent show five years ago. She envisioned a showcase, not a contest—which meant no judges, no winners and losers, and no points awarded. “For me, it’s all about building up their confidence,” she says. “We’re just sharing with everybody.”

She staged the talent show just like she would a dramatic production. She enlisted kids to help with technical and off-stage aspects of the show. She recruited parent volunteers to get kids on and off the stage quickly. And she planned, starting with classroom visits to the 300-student school, several months before the show.

She tossed out ideas of the types of acts students could do, everything from playing the clarinet to singing a song to performing a dance routine. She handed out a flyer spelling out the rules: no lip-syncing and no singing along with recorded vocals. “I told them to find the karaoke version of their favorite song,” Mutal says.

Students had to audition so organizers would know they had something appropriate prepared. Organizers held three practices during lunch and recess, and students were required to attend at least two. “We don’t want kids to get up on stage and just goof around,” she says. “We want them to have an act they can be proud of.” As well, the rehearsals got kids used to being on stage, minimizing stage fright.

When five groups of students wanted to do jump rope routines, Mutal knew that the audience wouldn’t want to sit through 15 minutes of jumping. She helped the students coordinate a single act where they were all on stage at the same time, with students coming to the front of the stage to do their own thing before retreating back to the group.

The audience especially enjoyed a percussion demonstration. Students played drums the PTA had purchased for the music department. “It was a great way to show off the equipment the PTA bought,” Mutal says.

The talent show featured 30 acts and had one 10-minute intermission. The PTA served cookies and water during intermission only. “You don’t want to sell candy,” Mutal says. “It’s too disruptive. Kids will be focused on getting candy rather than watching the show.”

The school talent show is not a fundraiser, and there is no admission fee charged. “It’s important to have it be free,” she says. “It’s all about the kids and the community.”

Mutal just wants everyone to enjoy seeing their students’ talents. “We tell the kids all the time, ‘You don’t have to be perfect,’” she says. “It’s all about having fun doing something you enjoy.”

A Tasteful Fundraiser—and a Chance for Kids To Shine

Julie Morgavi wanted her school’s parent group, the Global Education Collaborative Alliance of Parents, Teachers, and Staff, to sponsor a talent show, but the idea was poorly received at first. Parents feared it would emphasize pop culture, something the K-7 Mariposa Elementary School of Global Education avoids. Some parents thought it would seem too glitzy and encourage showing off, which is also not in line with the 296-student school’s mission.

The next year, with the group’s finances looking bleak, Morgavi pitched the idea again as a fundraiser. She noted a nearby school’s success in holding a talent show as part of a huge fundraiser.

Parents warmed to the idea, but they didn’t want to call it a talent show or a showcase. “We came up with Shining Lights,” Morgavi says.

She hung signs such as “Does your child shine?” to inspire excitement before the big announcement. After weeks of buildup, she finally introduced the concept.

In a fun twist, parent volunteers served as mentors, helping kids hone their acts and even
performing with them on stage. Some kids chose not to work with a mentor. Group acts were limited to five minutes, and individual performances were not more than three minutes long.

Morgavi lined up an eclectic mix that included synchronized drumming on water bottles, a play, a hard rock band, an acoustic trio, a karate demonstration set to music, ribbon twirlers, and Hula-Hoopers.

Some kids performed fresh arrangements of their favorite popular songs, playing the tunes on the piano or acoustic guitar. Other kids wanted to sing and dance to the radio version. As long as the songs were tasteful, Morgavi respected the students’ choices.

The three-hour show raised $13,000, including profits from a silent auction and DVD sales.

In the future, Morgavi would love to see gymnastics, a science experiment, magic tricks, and a soccer demonstration. “The whole point is to allow that child to shine, whatever it’s in,” she says. “The kids get so much out of it.”

A Different Kind of Space

Celebrate Cocopah is a huge fundraiser put on by the Cocopah Middle School Association of Parents & Teachers in Scottsdale, Ariz., to showcase the achievements of the students and teachers at the 960-student school. The community comes out to see how much the school has to offer.

The sprawling event has the feel of a carnival and includes activities such as a candy walk, a bake sale, and a silent auction. Celebrate Cocopah also has a coffeehouse, and it’s one of the event’s most popular attractions.

Volunteers set the outdoor venue up with six round tables covered with tablecloths and a chalkboard easel inviting participants. “We want it to feel comfortable, like a cute little coffee shop,” says Stacey Roswell, the parent in charge of the space.

The coffeehouse provides an opportunity for students to perform for their friends, teachers, and families in a casual setting. The coffeehouse atmosphere invites different types of performances, such as reciting a poem or reading a personal essay, as well as singing and playing musical instruments. Roswell works with students to coax out their talents. She uses clip art on flyers to suggest different talents, such as tumbling and dancing.

The parent group spends about $1,500 to hire a company that provides a complete stage set with a microphone, a sound system, and a professional crew to help out.

Just $1 gets each guest a seat, a donated baked treat, and a cup of Starbucks coffee or glass of lemonade.

Students who sign up in advance are given a performance time. They share that time with parents and friends, who can join the standing-room-only crowd just for one performance, or stay for hours. At least 250 people spend time at the coffee shop, and about 50 performers sign up.

Organizers encourage online signups to make sure everyone gets a slot. In between scheduled performances, students perform spontaneously. Once, a mother got up and sang a song to her son.

“It was a hit,” Roswell says. “It was a beautiful song, and she brought the house down.”

Flexibility keeps the two-and-a-half-hour event fun and lighthearted. “We always run over time, and no one seems to care,” Roswell says. Even when four different girl groups want to sing a song by Adele, it’s fine.

“Early preparation and a supportive atmosphere are the two most important things,” she adds.

Start promoting the idea to students early, offering examples of the types of talents they can show off.

Encourage a variety of talents other than singing and dancing, such as sports demonstrations and sketch comedy.

Be clear early on about expectations and rules, especially with costumes and song lyrics.

Hold a couple of rehearsals to make sure students are on track with their performances.

Use the rehearsals to test the sound system, and make sure volunteers helping with logistics know their roles.

Start and finish the show with your two strongest acts.

Print a program with the kids’ names and details about their performance.

Enlist parent volunteers to help usher kids on and off the stage to ensure smooth transitions.

Originally published in 2012 and updated regularly.