Make the Case for Parent Involvement 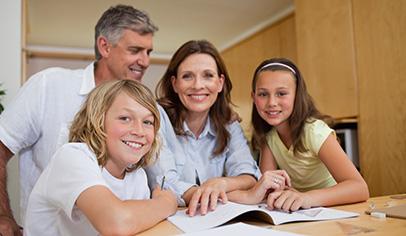 When parents participate in the educational process, kids do better in school. Here’s how to tell parents what they need to know.

If you are a parent group leader or volunteer, chances are you already know that your involvement in your child’s school is good for her education. It’s one of the main reasons you do it, right?

But here’s the thing: It’s actually really good for her education.

Researchers have been studying the effects that parent attitudes and actions have on their children’s academic success for many years, and they have reported consistently that children with parents involved in their education and schools earn better grades, score higher on tests, and much more.

The reasons that parent involvement increases student success are many—in itself, simply letting a child know you care and are invested enough to be involved in his day-to-day school life sends a clear message about the value of school and education.

For a follow-up book, A New Wave of Evidence: The Impact of School, Family, and Community Connections on Student Achievement, Henderson and coauthor Karen Mapp looked at 51 studies about the influence of school-family-community relationships on academic achievement. The research indicates that parent involvement in education is also linked to higher rates of school attendance, graduation, and pursuit of higher education; what’s more, involved parents have better access to information about opportunities for students, allowing them to be stronger advocates for their children. Research also shows that parent involvement makes a difference across all socioeconomic levels and cultural backgrounds.

Equally compelling, parent involvement is more important to a child’s academic performance than the qualities of the school itself, according to a recent study by North Carolina State University, Brigham Young University, and the University of California, Irvine. Researchers in this study surveyed more than 10,000 students and their parents, teachers, and school administrators and found that ultimately, the role of family involvement is crucial when it comes to academic success.

Parents may wonder what it really means to be involved. Parent involvement comes in different forms, such as helping kids at home with schoolwork and projects; attending school events, which helps foster a connection between home and school; and volunteering and participating directly in school.

So the evidence, and options, are there. But do parents at your school know how important their participation is to your school, as well as to their own children? To derive the many benefits of parent involvement, first make sure parents know about them.

Talk it up. Don’t miss opportunities to let parents know how meaningful their involvement is. This can be as planned as a plug during your back-to-school night speech, highlighting key points of parent involvement, or as casual as a quick mention in the drop-off line. The key is to get the message out there, and often.

Get teachers on your side. Teachers generally understand the value of parent involvement, so enlist their support—chances are they’ll be happy to help convey the importance of participation to other parents.

As well, teachers are often the best resource for finding out what kind of help will have the most  impact. At Rosa Parks Elementary in Eastvale, Calif., kindergarten teacher Jenna Karr launched a highly successful Family Reading Friday program during which she teaches her students reading, writing, and arithmetic while giving parents lessons in academic involvement. Not only did the program enhance communication with parents; it also improved student academic performance, Karr says. Depending on your teachers’ needs, you could enlist members of your group to help start such a reading group or a parent-child book club.

Put it in print. Look for opportunities in your emails and newsletters to highlight the benefits of parent involvement. Social media, too, provides an ideal place for reminders. Even simple posts about events your parent group held and items you purchased for the school can help reinforce the direct effects that parent involvement has.

Check in with the principal. To best enhance your volunteers’ ability to contribute meaningfully, ask your principal where time, effort, and money might be best spent. Since the PTO at Trinity Elementary in New Port Richey, Fla., learned from the principal that the school was behind in technology, they have helped raise more than $45,000 to purchase iPads, laptops, Smart Boards, and other equipment. “We [do] a combination of community events, in-house fun nights, and corporate fundraising. We do whatever it takes to earn money to get technology into our kids’ hands,” says Sharon Michael, the group’s communications chair, adding that the PTO executive board meets with the principal monthly to review needs. (And thanks in part to the technology upgrade, one of Trinity’s 1st grade classes won a statewide competition for a video they took during a field trip as part of an enrichment project.)

As important as letting parents know the value of contributing is encouraging them to find a way that works for them.

Explore and utilize skills. Many parents have just the right skills to make them perfect candidates for specific types of enrichment. Kristine Asselin, an author and mother from Littleton, Mass., regularly speaks to groups of elementary-age children about the writing process and improving their writing skills. The kids “see me as a different kind of ‘expert’ than their teacher,” Asselin says. “It’s so exciting to be a part of a tangible learning experience.” Virginia Wilcox, a college professor from Forsyth, Ga., goes to her kids’ school in costume as “Professor Zero” to help instill math concepts. (The result of her efforts? Wilcox says she and a group of teachers randomly selected 30 5th graders and tested them before and after the Professor Zero training. Prior to the lessons, none of the students scored above 50 percent on an algebra assessment. After the lessons, all 30 passed the assessment with a score of 70 percent or higher.) If you have a need, ask around—there’s a good chance you have a capable parent in your midst.

Don’t overwhelm. Some parents get discouraged or overwhelmed by the thought of committing to a particular amount of time. Let parents know that all you’re asking for is a few hours of their time and that you won’t ask for more—and then don’t push. You’ll get a lot more people to volunteer one time if they feel there’s a limit to their commitment, and it’s highly likely that you’ll get some who will want to make it regular.

It’s clear that parent involvement can make a dramatic difference in children’s academic success. So don’t be afraid to make the case—it will pay off.