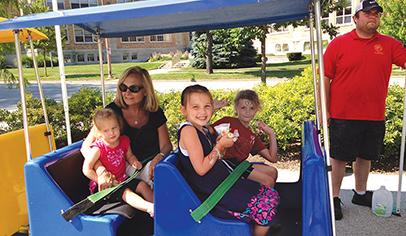 Two fathers created a 100-plus group of men whose dedication and determination earned the group PTO Today's 2013 Outstanding Parent Group at a Private or Parochial School.

A conversation between two dads, Jay Herron and Doug Rupert, about an avenue for the men of St. Joseph School and parish to volunteer set in motion a massively successful project: The St. Joseph School Men’s Club, 2013 winner of PTO Today’s Outstanding Parent Group at a Private or Parochial School, grew from the mere two founding members to an impressive 100-plus member roster since only January of this year.

The men’s group at the Wilmette, Ill., Catholic school put in place four pillars: support, socialization, spirituality, and service. They launched a membership drive through social gatherings like poker night and NBA tournament watch parties and immediately began gaining members who were eager to help with the vision to bring a fellowship of capable men into a school support role.

The group’s first project featured Mike Swider, head football coach at Wheaton College, a liberal arts school about 25 miles west of Chicago. Fathers and children from St. Joe’s 500-student, preK-8 school gathered for the free lecture, which focused on self-esteem, peer pressure, and being a role model, all hot topics in schools today.

The men’s group has already raised $19,000, but it isn’t all about money. Every project is about involving the group, the community, or the kids in some facet of one of the founding pillars—though the social aspect is the key, Rupert says. Bringing people together socially gets the ball rolling for the avenues of service and spirituality. The St. Joseph Men’s Club sponsored the family fish fry during Lent, organized a special men’s Mass, and hosted an evening of prayer and reflection.

When the school’s annual fundraiser, the St. Patrick’s Day dinner, was approaching, the group jumped in to support the event. They have also boldly taken over the summer carnival with a vision to make it bigger and more accessible to the community; a summer festival that brings in more people will naturally bring in more money for the school.

What are the plans for these funds? St. Joseph School is in dire need of a technology overhaul. David Flick, technology chair of the group, says, “St. Joe’s existing computer lab is too small and made up of aging, outdated computers. Our goal is to bring new hardware and software into the lab and the individual classrooms so that technology can be used to serve the students more effectively.” Installing computer software for a program to support blended learning is also a goal. It will help teachers reach all learning levels in one classroom, eliminating the need to teach to the middle—leaving some students behind and not challenging others.

Members of the St. Joseph Men’s Club strive to make themselves better people as they improve their school and their community—certainly an attainable goal from this group that has already achieved so much in so little time.

What the judges loved: This group has a wonderful can-do attitude and places an emphasis on building a sense of community.

Cool fact: The St. Joseph Men’s Club motto is “Ferrum Ferro Acuitur,” a reference to a Bible verse that reads “As iron sharpens iron, so one man sharpens another.” The members believe that working together will help them all become better people.