The Art of Saying No 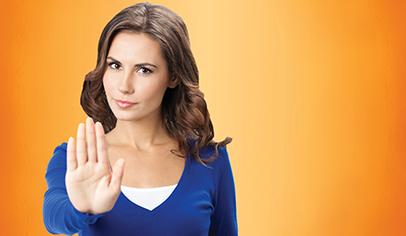 Use these tips to keep yourself from becoming overcommitted, or worse, burned out.

You’re already stretched too thin when you’re asked to serve on another committee or your parent group is asked to take on just one more major event. You want to say no, your mind screams no, but somehow the word never makes it to your lips. Been there? You might even be there now, juggling a job, a family, and multiple PTO projects, yet you’re still unable to turn down another volunteering opportunity.

Most PTO leaders are the type to offer their help when it’s needed, again and again. Their schools benefit greatly from their commitment. But there are times when the best thing you can do as a leader is to say no, or to recognize when it’s best for other leaders or volunteers around you to do so. Sometimes, saying no is what’s necessary to keep your stress level in check or to keep the PTO focused on its top priorities.

Then why is it so hard to say no, even when we know we should?

“The problem is, from the time we’re toddlers, we’re taught to say yes,” says Susan Newman, a social psychologist and author of The Book of No: 250 Ways To Say It—and Mean It. If you uttered no too often growing up, you were most likely sent to your room. When we get to adulthood, many of us retain that mindset of always having to be agreeable. “We’re so programmed to be caring and nurturing and helpful that it goes against everything we’ve learned as young children to stand up for ourselves and guard our boundaries and be able to say no,” she says.

We might acquiesce because we fear being disliked or perceived as lazy or uncaring. Some people even feel that it’s selfish to say no. Still others automatically agree to everything asked of them because they like to be needed. Finally, a lot of people say yes in order to avoid any kind of confrontation—it’s simply the path of least resistance.

Many volunteers believe that if they don’t step up and do whatever is needed or asked of them, no one else will. The pitfall to this thinking is that they then run the risk of taking on too much, burning out, and calling it quits. Sometimes it’s actually better to let a task go undone or to say no to a new project. The benefit is that the organization is stronger over the long run because you—or your key volunteers—are able to maintain your energy and enthusiasm.

“If you’re burned out, it’s often because your passion has become a liability, not only to your own health and well-being, but ultimately to the organization itself if you can’t do what they need you to do,” says Katherine H. Campbell, executive director of the Council for Certification in Volunteer Administration.

If saying no to volunteer opportunities doesn’t come naturally to you, try to think of it as being selective about how you’ll spend your time. You say no to some volunteer roles so you can say yes to others. The same goes for officers who make decisions about what projects their parent group will take on. It’s OK to table an idea for a new social event so your group can focus its energies on the science fair.

Campbell advises carefully evaluating volunteer opportunities or new projects before agreeing to take them on. Instead of being quick to give a broad, all-encompassing yes, zero in on what part of the job you think you can comfortably do.

If you’re overloaded at the moment, you can express support for a project but say that you can’t get involved until your son’s soccer season ends, or your group can’t until after the auction. If you know someone else well-suited to the job, refer that person and arrange to make introductions as necessary. Consider ways to split the workload. Perhaps there’s someone you could cochair a committee with. Begin a new project only once you are able to recruit enough reliable people to help.

If you’re approaching burnout, consider asking to be switched to another task. A fresh assignment might engage you in a different way, Campbell says.

PTO president Liz Steventon of Rochester, Vt., recently took that approach to heart. Last fall, the veteran leader submitted her letter of resignation to the principal at Rochester Elementary, effective the end of the school year. She fully intends to remain active behind the scenes; she just doesn’t want to be in charge any longer. “It’s time for some younger parents to step up to the plate,” Steventon says, adding that she plans to recruit several new volunteers before her time as president is up.

Preventing Burnout in Your PTO

You could say parent group leaders face a double-header when it comes to burnout. They need to prevent it from occurring within themselves as well as in their organization. To that end, Newman has devised a series of questions she suggests that PTO leaders ask themselves and that they coach group members to think about before saying yes to anything. Particularly for those who are always agreeing, Newman says it helps to think no before you say yes and to ask yourself the following: Do I have time for this? What do I have to give up to do it? Am I going to feel pressured? Am I going to be upset with myself for agreeing? Am I going to be upset with the person who’s asking me? Am I being manipulated? What do I have to gain? What’s in this for me or my child?

There’s always some reason why people volunteer, whether for the sake of their kids or a cause they believe in. It’s what keeps them motivated in much the same way a paycheck keeps workers on the job. However, sometimes the motivator isn’t a particularly good one, Campbell says. For example, guilt as a motivator doesn’t work well. It’s a stick rather than a carrot—a negative impulse that can create negative feelings for the volunteer and, over time, for the group as a whole.

The PTO leaders at Morgan Elementary in Shelby Township, Mich., are mindful of how they solicit volunteers and are careful not to stretch them too thin. The group’s president, Christina Haemmerle, is a clinical psychologist in private practice who works with clients about setting boundaries and developing the ability to say no. She says technology has been a godsend to the group. Online volunteer sign-ups have delivered many more new volunteers than they’ve ever been able to solicit at PTO meetings, which are usually only attended by the same core group. The principal sends out the link in an email to all school parents.

“It’s so much easier for them to make a decision in the comfort of their own home,” Haemmerle says. “It’s either ‘Yeah, I’d like to do that’ or ‘No, I’m so overwhelmed, I can’t even think of volunteering this week.’ The point is, they don’t have to do anything with it unless they want to and they’re not having to say no to anybody.”

Another way the Morgan Elementary PTO tries to prevent volunteer burnout is by being as specific as possible with their requests. There’s nothing worse than signing up for an event, only to stand around idly because tasks aren’t clearly designated and little organization is evident. It’s frustrating, and volunteers start to ask themselves why they bothered. If everything is too vague, then they won’t feel useful and it could lead an unwillingness to help out in the future. Haemmerle also stresses the importance of saying thank-you and letting volunteers know they’re appreciated.

Saying No Isn’t So Bad

If you’re not accustomed to turning down volunteer opportunities or new projects, you might worry about what will happen if you do. Will the person asking be mad at you? Will saying no give the impression that you’re not committed to the group? There’s never going to be quite the degree of negative fallout that people imagine if they decide to say no to a request, Newman says.

Most likely, they understand why you need to say no because at some point, they’ve been in your shoes. This is a critical point and one that bears keeping in mind next time you’re dealing with the fine art of saying no.

Keep volunteers invested in the organization. If someone says she can’t do it now but to try her again in six months, make a note and follow up, says Katherine H. Campbell, executive director of the Council for Certification in Volunteer Administration. If you don’t, she may think you don’t really care about her, so why should she care about you?

Be alert to signs that they’re fading away. If a volunteer is failing to show up or not completing tasks, ask how she’s doing, Campbell says. A personal matter may have arisen, causing a previously committed volunteer to fade away. Or maybe the volunteer needs a break, with the idea that she’ll rejoin the group later on down the road.

Discover what they’re passionate about. PTO president Christina Haemmerle gravitates toward events involving food. Taking time to learn an individual’s interests and encouraging them to volunteer in related areas will make the experience more meaningful for them, she says.

Set parameters for volunteer tasks. Spelling out the specifics in your favored form of communication (emails, newsletters, or on Facebook) lets people figure out for themselves exactly what they can and cannot incorporate into their schedule. It’s much more effective than a vague, open-ended plea for volunteers.