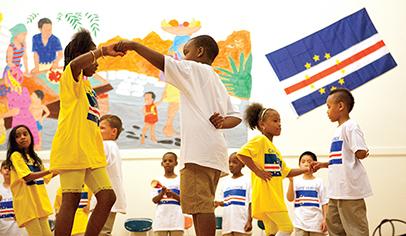 How do great groups do it? Here’s a look at four parent groups with remarkable accomplishments, and the lessons your group can learn from them.

Some PTOs seem to have it all together. They pull off major events without a hitch, and they regularly accomplish tasks that might seem unthinkable at your school. Just how do they do it? Here’s a look at four outstanding groups with remarkable accomplishments, and the lessons that can be learned from their examples.

Mather Elementary School will turn 375 years old this year. Despite this long history, the Boston school in recent years lacked a sense of community. Its geographic isolation at the top of a hill mirrored the lack of unity among its parents.

Gradually, through one invitation after another, the Mather Parent Council reached out and built a strong sense of community among school families. One indication of the change is the parent profile collected by the MPC at the start of each year to gauge parents’ interests in volunteering. A few years ago, only 25 parents submitted the form. For the 2012-13 school year, 75 profiles were turned in. This year, that number grew to 170. “It feels really incredible,” says MPC cochair Sierra Rothberg. “People feel included.”

One of the first big events was a spring carnival. “We invited parents of the incoming class and invited the community at large to see the school and be part of the celebration,” Rothberg says. Gradually Mather became a more popular option in a lottery system for choosing elementary schools, and negative attitudes thawed. “We started to see an evolution,” Rothberg says. “More parents were choosing Mather, and they were becoming more active at the school.”

Parents showed up to help create an outdoor classroom and later to make raised bed gardens. They came for a welcome-back potluck, as well as gatherings to celebrate Vietnamese and African heritage. A classroom parent program started, with lots of participation to build shelves in classrooms and assist teachers by reading and helping students get their jackets on before going outside. “We worked really hard gaining the teachers’ trust,” Rothberg says. “It takes a while for teachers to embrace parent involvement and trust that we’re there with good intentions. And we engaged a whole group of parents that might not necessarily come to meetings.”

Another new initiative is a parents’ retreat. Sitters watch the children while parents meet for a few hours at someone’s house to problem-solve, discussing “big picture” ideas such as events that would attract members of the community. All parents at the school are invited; about 15 to 25 usually attend. After the discussion, everyone eats a potluck meal together. “We wouldn’t be where we are today without this,” Rothberg says. “We wouldn’t have that connectedness.”

The bottom line is the consistent focus on community. “We find ways to celebrate together that don’t involve asking people for things all the time but are just about enjoying each other’s company,” Rothberg says.

Nine years ago the executive board of the parent group at Roxborough Primary & Intermediate Schools in Littleton, Colo., quit and the entire organization disbanded. Luckily, husband-and-wife team Sean and Barbra Chase Burke stepped in, and now the group is thriving. The Burkes applied their business backgrounds to the reorganized and renamed Parent Teacher Involvement Committee, using sound corporate practices to help the group function much more effectively. As a result, the PTIC became known as a well-organized, creative, and fun group.

Parent participation increased dramatically, with more than 10,000 volunteer hours logged in 2012-13 by 379 parents, staff, and community members. More than 60 PTIC events filled the school calendar, from a sock hop to space day science activities to a penny drive for charities. In addition, fundraising profits skyrocketed from $20,000 per year to more than $140,000, money that helped provide classroom sound systems, iPads, a cafeteria remodel, and more.

So how did they do it? Goal-setting, project postmortems, budget accountability, and consistency in branding and messaging were the approaches that helped the PTIC become not only unified and successful but also able to serve as a model for the entire district. They started with a strategic plan. “That’s the biggest thing,” says president Jen Richardson. “Where do you want your organization to be in years to come? People are more likely to get behind a cause if they know what they’re working for.” At Roxborough, tremendous enrollment growth had led to a need for additional technology, so that was a recent focus.

The PTIC’s process of recruiting, training, and supporting volunteers sounds a lot like a company’s human resources department. Potential committee chairs fill out what amounts to a job application that asks about their experience, skill sets, and interests. “We want to make sure they’re the right fit,” Richardson says. Once “hired,” they attend an orientation about the group’s mission and objectives. “We’re not just filling spots but filling the organization with the right people,” she adds.

Once on the job, committee chairs are mentored by more experienced chairs. “Our committees run like their own businesses,” Richardson says. “We give them autonomy and allow them to be creative. We ask them to make it their own, like they’re small-business owners. It’s fulfilling. It gives them purpose and respect. They have the chance to make their mark but have the backing of the PTIC to support them.”

And they have a set of processes and procedures to follow, including more than 150 different templates. Committees move from setting goals to running a project to conducting a postmortem with an analysis of what worked and what didn’t (such as flyers not sent out on time). Committees keep in touch with the two treasurers, who monitor their spending. There are even guidelines for uniformity in branding and messaging, down to the font size and color. “It’s consistent so people know what to expect,” Richardson says. “It creates brand loyalty.”

Throughout the year, the PTIC leadership plans for the future. “We look at bench strengths and succession planning for committees,” Richardson says. “It helps with turnover.” The result of such a thorough and supportive culture is that a group that once had only nine volunteer leaders now has 90.

For the past 15 years, the Yantacaw School PTO in Nutley, N.J., has run an ambitious after-school program called the Curiosity Shop. The program offers students the chance to learn about everything from making candy to writing computer code over four weeks each March. Even after all this time, the program enjoys phenomenal parent support and continues to grow and evolve. The program endures in part because of its limited demands on parents and great organization. But its real secret to success lies in leaders’ openness to change.

The goal of the Curiosity Shop is hands-on learning with parents as instructors, but from the start the emphasis was on not demanding too much involvement. The feeling was that one hour a week for four weeks was a commitment that even working parents might be able to make. Parents can first volunteer as assistants, allowing them to just show up to help. There is also training for newcomers to allay any anxiety about what’s expected of them.

Each January, an email goes out asking parents if they’d like to participate. They’re given a list of classes previously offered and which ones need an instructor; they can also propose a new class. They submit a description of what they want to teach and a general lesson plan for the four sessions. Sometimes the courses are related to their professions, like the attorney who teaches students to try a case or the publisher who guides children through the creation of a digital magazine. Or they are related to hobbies like chess or photography.

Early offerings included knot tying; a recent class covered how to start your own blog. Some classes—like Pokemon—ride a wave of popularity and then fade away. Candymaking has always been the most popular class. Anything with Legos or sports is in demand, too. “Part is pop culture and what the interest levels are,” says PTO executive board member Christina Surretsky. “But you would be surprised—kids are so computer-savvy these days, but things like knitting and sewing are equally popular because they don’t get instruction like they did generations ago.”

When the Curiosity Shop started, there were about 10 classes. Now, more than 20 are offered, about five of which are new each time. All classes are reevaluated at the end of March, and those with low enrollment are either tweaked or replaced. And as the instructors move on over time, their classes are taught by others or replaced, depending on interest.

Lesson 4: Have a clear vision for the future

Not long ago, the playground at the Hamilton (Miss.) School was a mess. Thirty years old, it was off-limits to the youngest children and inaccessible to those with disabilities. Unfortunately, the PTO wasn’t very active. But the need for a new playground galvanized the parents, who reorganized the PTO to tackle a huge playground project.

A small rural town far from city life, Hamilton is still suffering the effects of the economic recession. That makes it even more remarkable, then, that in just a few months, the PTO was able to raise enough money for the first phase of an accessible playground.

The process started with four motivated parents. First they held a free movie night through the support of local businesses. The 200 families who attended were impressed. “That kicked us off,” says PTO president Chris Markham. “They saw that we were serious and that we were not money-dogging them.”

At the first PTO meeting of the year, those in attendance agreed that a new playground was their top priority. The parent in charge of the effort pushed for accessibility to accommodate students who use wheelchairs.

The PTO contacted more than 120 local businesses to seek their support and invited them to a kickoff event. Kids showed up in specially made T-shirts with the slogan “What About ME?,” emphasizing the need for accessibility. Parent group leaders gave speeches about the importance of the playground, and huge cardboard checks were presented by companies that pledged funds, with the newspaper covering the festivities. A county supervisor agreed to let county workers help by filling holes. She wrote out a personal check, and she guided the PTO through a process that ultimately gained them $10,000 from the county.

The group raised additional funds—and gained valuable exposure for the playground project—by sponsoring a fun run in which entrants compete on an outdoor obstacle course. More than 120 participants flipped tires, crawled through a hay maze, and made their way across a muddy lake as part of the event. The first-time event raised more than $5,000.

With a clear goal in sight and a variety of appeals to the community, the revived Hamilton PTO was able to raise money like never before. By the end of the first year, donations for the playground totaled almost $47,000, and new, accessible equipment was installed. Additional equipment will be purchased and put into place over the next two years.