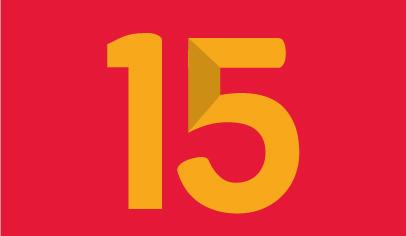 To celebrate PTO Today’s 15th anniversary, we put together 15 of our favorite smart, creative, and just plain fun ideas shared by readers.

Volunteering doesn’t have to happen during the school day. The Englewood (Fla.) Elementary PTA instituted a “take-home work club” to involve parents whose schedules kept them from volunteering at school. Parents were given envelopes with directions on how to complete their project and when to return it. Many of the tasks related to redemption program fundraisers. At other schools, PTOs have recruited parents for at-home tasks like producing newsletters and updating the parent group website. September 2009

During the elementary years, kids love it when their parents volunteer. So why not give kids a way to brag about Mom and Dad? The Larchmont Elementary PTO in Mount Laurel, N.J., included kids’ names when recognizing parent volunteers on a bulletin board—for example, “Frankie’s mom helped out at the book fair.” “It means a little more than if it’s just the parents’ name,” said former president Wendy Keller. In California, the Solvang School PTO made special name tags for kids to wear at its dads volunteer day. The tags read “My dad [or uncle, or grandpa] is volunteering today.” August 2008 and October 2009

PTO leaders at Chicago’s Hamilton Elementary know that to build relationships with local businesses, they have to think about what they can give, not just what they can get. In addition to formally thanking donors in letters, on event signage, and on the parent group’s website, the Hamilton Action Team encouraged the school community to patronize companies that supported the school. After the group spread the word that a local restaurant had donated food for several events, teachers made a point of holding an after-school meeting there. March 2008

An Alabama PTO came up with a clever way to welcome students to kindergarten and build school spirit. As the new school year approached, a parent volunteer from Shades Cahaba Elementary in Homewood placed signs in the front yards of incoming kindergartners reading “Shades Cahaba Loves You! Welcome to Kindergarten!” While the signs were intended to help calm first-day jitters, they had the added benefit of boosting early registration. The early enrollment helped administrators determine class size and the number of teachers needed for the school year. March 2006

Are your volunteers always calling you at home to ask you where to find “stuff” at school? The John M. Moriarty Elementary PTO in Norwich, Conn., came up with a solution. The group produced handbooks for all of its programs at the school along with a “Where Do I Find the...” list. The list showed PTO contact names and numbers and gave new volunteers directions for tasks such as booking the school gym for an event and making coffee. Also included: pictures of activities and events over the years, with notes on what worked well and what didn’t. September 2005

6. Going All Out for Grandparents

The prospect of trudging from the parking lot on a cold November day kept some people from attending the annual Grandparents Lunch at Webber Elementary in Lake Orion, Mich. So the PTO decided to offer valet parking. In addition, volunteers greeted attendees and escorted grandparents who needed extra help. Attendance jumped from 150 to almost 400. At Grimshaw Elementary in Lafayette, N.Y., organizers of a popu­lar spring event for grandparents were concerned about visitors having to walk too far to the school. To ac­commodate as many as 350 visitors, the parent group arranged for off-site teacher parking to leave the school lot empty and ran a school bus from a fire station where some visitors parked. January 2008 and April 2008

Middle schoolers can be a hard bunch to please, but the parents at Rosemont Ridge Middle School discovered a winning formula. With low attendance at after-school dances, the West Linn, Ore., PTO surveyed students about what they’d like in an event, then gave them what they wanted. A Halloween-theme “Fun Blast” included a costume dance but also offered plenty of activities away from the dance floor. Kids could play board games, join in basketball, volleyball, and dodgeball in a gym, watch a movie, or compete in a video game tournament. While the old dances drew fewer than a dozen students, about 500 came to the Monster Mash Fun Blast. September 2004

Tailgate parties aren’t just for football season. Several creative parent groups have organized tailgate parties to celebrate back-to-school time. At Lorenzo de Zavala Middle School in Amarillo, Texas, a Load Your Locker party brought kids and parents out to have fun, meet their teachers, and meet the PTA. Parents could buy spiritwear and fill out volunteering forms, while kids ate hot dogs, listened to music, and socialized. Students could find and stock their lockers and chat with teachers in the hallways. At Durbin Creek Elementary in Jacksonville, Fla., the PTO’s party featured the high school drumline. Students were encouraged to “tackle a good book” and exercise each day. Families participated in football-throwing challenges, Zumba dance, obstacle course races, and more. August 2012 and January 2012

Students at East Elementary in Lancaster, Ohio, didn’t just create art for the school art exhibit. They received lessons on proper etiquette, like keeping their hands behind their backs to keep from touching art on display. They went to the exhibit in their best clothing, politely complimented fellow artists on their work, and mingled with guests. They sampled hors d’oeuvres and made conversation while classical music played softly in the background. What’s more, they created their projects inspired by a particular artist without the benefit of having an art teacher on staff. Thanks to the work of the PTO, students had more than the typical school art exhibit experience. They experienced what it’s like to go to an art gallery opening. March 2013

Kids in northern states long to go swimming during a harsh winter, while southern kids wish for nothing more than a day to play in the snow. That’s the genius of “unseasonal” social events: They let kids have experiences Mother Nature doesn’t typically provide. In Muskego, Wis., the Country Meadows Elementary Parent Advisory Council sponsored a free winter pool party at the local high school. Families brought their own inflatables, and photos of each grade were taken for the yearbook. Snow is a rarity in Hoover, Ala., where the Deer Valley Elementary PTO brought in a snow machine for an after-school event. In between playing in the snow, children made scarves for the homeless and built snow globes to be donated to a local children’s hospital. September 2013 and October 2013

A swap can help families reduce clutter, save money, and get the supplies their kids need. The Lakeland Village School PTA in Lake Elsinore, Calif., invited schools districtwide to exchange clothes that were too small for clothes that fit their growing kids. Many schools that require uniforms hold a school uniform swap at back-to-school time. Others have held book swaps in conjunction with a school literacy program, a dress swap before a father-daughter dance, and a costume swap a few weeks before Halloween. For families with multiple trick-or-treaters, this can be a real money-saver. Have a check-in area where families get a ticket for each item they bring. They can use the tickets to “pay” for the items they want to take home. April 2011

When Birch Primary School’s state reading scores came in one spring, the PTA decided it needed to help improve student literacy. PTA leaders at the North Olmsted, Ohio, school devised an ambitious plan: to get the student body to read for a total of 1 million minutes in just seven months. They called it the Million Minute Reading Challenge. The PTA organized rallies and went all out on incentives. When a classroom met its monthly reading goals, they were rewarded with books, bookmarks, and other reading materials. To help reach the goal, the PTA hosted a family “read-in” night. After meeting the goal, students received prizes, including a tote bag to remind them of their accomplishment. Even better, the school received a rating of “excellent” on its next reading proficiency test. April 2005

Two schools in Westminster, Md., engaged in some healthy competition to boost their collections of Box Tops for Education. The principals of the schools, East Middle and West Middle schools, pledged to wear the rival school’s spiritwear if their school collected the least box tops during a one-month period. The Box Tops coordinator at one of the schools thought the contest would be a low-cost way to get kids more motivated than a typical pizza party. It worked. The two schools collected a combined 26,519 box tops. The losing principal at West Middle School wore a T-shirt that said “I (Heart) East.” Don’t feel too bad for her, though—her school’s share of the collection came to $1,000. August 2013

Parents of students at Maine’s Windham Primary School and Manchester School expressed concern that there were too many children on the playgrounds at recess with too little supervision, and there were also complaints about the lack of order in the cafe­teria. To overcome these problems, the PAC developed the Take Your Child to Lunch Program. Parents and rela­tives of students are invited to have lunch with their child and his friends in the cafeteria and then stay for recess, where they serve as extra eyes to look out for potential playground problems. More than 80 parents regularly participated in the program, and students and volunteers alike appreciated the chance to spend time together at school. May 2002

15. A Tradition of Service

The PTO at Charles F. Patton Middle School in Kennett Square, Pa., organizes an annual bike drive to benefit needy kids. The PTO collects, refurbishes, and distributes more than 200 bikes to children from low-income families each year. During an annual cleanup day, volunteers replace defective chains, install new seats, and substitute new handlebar covers for worn-out ones. Over the years, the event has grown to include multiple community groups and to provide families with food, toys, and winter coats, as well. What makes this large-scale community service project even more remarkable is the fact that most of the recipients are complete strangers—not Patton Middle School students. September 2009