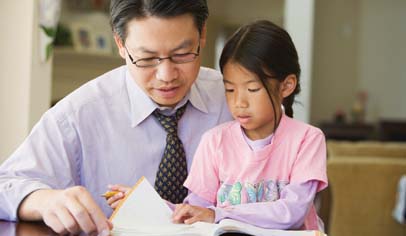 Fathers want to be involved, but they aren't necessarily going to respond to traditional parent group roles. A dads' club can give them a low-pressure way to take the first steps.

When psychologist Jeff Jones went to his child’s school to volunteer in the mid-1990s, he looked around during meetings and saw a lot of similar faces—female faces. Where are the dads? he asked himself. And how come they aren’t more involved?

Feeling out of place as the only man in the room and seeking answers to those questions, he decided to do something to help other dads be more comfortable with school involvement. So Jones took matters in hand and started a dads’ club. The men came in droves, and what began as an experiment in Solana Beach, Calif., has since spread to more than 20 schools regionally and 2,000 volunteers.

Back to the Beginning

Despite the immediate interest by dads in general, it wasn’t until a few years later that the idea got a boost. Fred Carson, the current project coordinator for an organization called the Dads’ Club in the San Diego area, met Jones for the first time in 2000 and immediately saw the potential benefits of expanding the concept.

“I was impressed with Jeff’s ability to draw dads to school and wanted to know how we could duplicate this in low-performing schools,” Carson recalls. “We received a grant to target 28 largely Hispanic schools and began dads’ clubs in four of them.”

Carson worked with Melissa Whipple, the parent academic liaison coordinator for the San Diego Unified School District. (PALs are certified teachers who work with families to support greater parent involvement in the city’s schools.) Whipple had heard Jones speak at a workshop for starting dads’ clubs. “The first meeting was all women,” she says, “but that didn’t discourage us. Talking to moms was the first step toward communicating how important male involvement is in demonstrating a commitment to academics.” This is particularly true in underserved schools where few, if any, male role models interact with children.

The dads’ clubs were a hit from the start. Many men at the targeted schools felt they had little to offer because they weren’t well-educated themselves. Additionally, in some cultures school involvement isn’t encouraged.

“We emphasized that men have something unique to share and that the very act of showing up supports educational efforts,” Carson says. “We also make sure to welcome any male role models who are involved with a child, such as uncles, older brothers, grandfathers, coaches, and stepfathers.”

With so many volunteer opportunities at schools, it may seem pointless to create a separate organization specifically for men. In some cases, moms might even feel resentful and ask why they can’t form a similar club for themselves. But having a distinct dads’ group provides valuable benefits.

“It has to do with one-on-one time with children,” Carson explains. “Fathers who come to read to the kids, do playground duty, that sort of thing, show the child that dads value their education.”

According to research by the U.S. Department of Education, students with involved dads also have higher rates of academic success, fewer problems with truancy, suspensions, and expulsions, increased self-esteem and self-confidence, and better child-father relationships.

Dads’ clubs are meant to complement parent groups, not compete with them. Creating a dads’ club isn’t a sign that moms aren’t pulling their own weight; instead, it’s an opportunity for fathers to have focused time with their children, something they may not be able to do that often in everyday life. And in many ways, developing a committed network of involved fathers is its own reward: Being involved with a child’s academic life can act as a springboard to more involvement in parenting overall.

In the San Diego school district, dads’ club activities are usually held once a month, before or after work. “We alternate a fun event with a scholastic one, with a planning meeting in between,” says Gina Montijo, parent academic liaison at Edison Elementary in San Diego.

One way these groups kick off a planning meeting is to discuss a statistic about the value of men in a child’s academic life. “What we have found is that the dads in dads’ clubs become more involved in other ways as well,” Montijo notes. “At our ‘Family Fridays,’ we devote one hour at the start of the day for reading with a parent. In the beginning, it was all moms, but now about a third of the participants are dads.”

Dads’ club events in the San Diego area aren’t so different from those of a typical parent group. Some of the most successful of them include:

Other events have been planned around community service projects, antiviolence programs, family board games, author visits, or discussions with financial experts about college funding.

“What’s surprising is how dads begin to open up about their own childhoods as they become more involved with a son or daughter,” Montijo says. “Our dads’ club held an arts-and-crafts night with a kite-building activity. We found that the dads ignored our plans and began building kites as they had done when they were kids. It was wonderful to see the room filled with children—of all ages.”

Steps for Starting a Dads’ Club

Plan
Meet with the principal to explain the dads’ club concept and define your school’s needs and projects.

Invite
Invite community leaders and families to an informational meeting to form a dads’ club.

Get Together
Hold a meeting. To make it run smoothly:

Make It a Day
Schedule an annual “dads day” where you present the dads’ club concept to newcomers and ask for volunteer commitments.

Getting Past Resistance From Mom

One roadblock to forming a dads’ club might come from mothers who want to know why dads can’t just join the parent group—or why women can’t form a moms’ club. To foster a friendly environment: