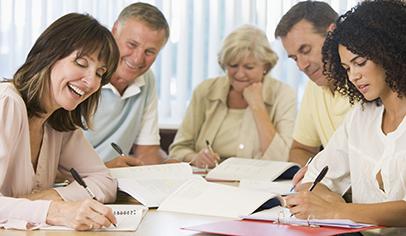 The best leaders recognize their natural tendencies and use that knowledge to respond appropriately in different situations.

The music teacher let you know last spring that the band needs new uniforms, new instruments, and new music, among many other things. With budget cuts, the school cant manage any further expenditures. You present the case to the members of your parent group, and they decide to do a major fundraiser to supplement the music education program this year. How would you go about implementing this project?

Would you pick the type of fundraiser to undertake, set the goal for the amount of money to raise, appoint a subcommittee, chair it yourself, create a detailed list of tasks to be done, include a time line for who will do what and when, and then see that everything gets done on schedule? If so, you are a task-oriented leader.

If you would ask for volunteers, tell them to choose exactly what type of fundraiser to do and project how much they think they can raise, then ask for a report back only if they need help or when the project is done, you are a people-oriented leader.

If you're a people-centered leader, you probably try out your ideas with the group and ask for ideas frequently. Your willingness to make changes agreed upon by the group is evident. You want everyone to be happy about doing this job. It doesn't much matter how it gets done or even when; every voice must be heard.

For an annual event like teacher appreciation week, a people-oriented leader might ask for volunteers to form a subcommittee. She would let the committee know when the event is usually held but also state that if that didn't seem convenient, it wouldn't hurt to adjust the time frame. Little information would be offered about what had been done for past teacher appreciation events, and the leader would encourage the group to do whatever felt right.

The only caution for the group might be to stay within the allotted budget but to feel free to divide the money as the members saw fit. If anyone asked a question, the leader might say "I'll leave you to figure that out with your group."

The Task at Hand

Task-centered leaders tend to say things such as "Try harder! Everyone needs to pitch in more to get this job done." Or "I want this job done the right way." Task-oriented leaders often create guidelines (more like rules!) for getting each job done. Rarely would these leaders consult the group members before acting. Instead, a task-oriented leader would let members know what she had decided and would further inform them exactly how the job was to be accomplished, right down to the timetable.

If you're a task-oriented leader, you probably have a very low tolerance for uncertainty or postponement. Endless processing of group opinions and feelings is definitely not your thing. Let's get this job done!

The task-oriented leader has a very different approach to planning a teacher appreciation event. She would likely appoint a committee, but the members primarily would be asked to perform gopher jobs. Little or no actual planning would be required. In fact the true task-oriented leader would probably preplan the entire project, carefully outlining the time line and specific tasks on a calendar. She might allow the committee to have some decisionmaking power in the gift selection for teachers but would have catalogs with items marked from which the group could choose. She would let the group know that final approval by the leader would be required before any purchase was made.

Of course, both advantages and disadvantages result from each orientation. Picture these two orientations at opposite ends of a continuum. Leaders who operate habitually at the people-centered extreme may keep people happy at the expense of getting the job done. The group may have a great time, but progress on projects may crawl instead of zooming. On the other hand, the satisfaction with the job and the group that comes from having plenty of input and feeling a sense of belonging can also motivate people to work harder toward group goals, becoming an important advantage.

Leaders whose pattern falls near the task-centered end of this continuum may get the job done very well, but they risk alienating the very people they depend on, perhaps compromising the ability to function effectively in the future. People who are disenchanted with the leader of a group tend to pull back, sometimes not feeling good about accomplishing goals they had little or no say in setting. The task-centered leader's job or project is accomplished as efficiently as the limits of her imagination because she removes the surprises that others might impose.

Is an orientation a destiny? Of course not. The advantage of thinking about and recognizing an orientation lies in a person's ability to modify the way she acts and reacts according to the circumstances. There are situations that demand a more task-oriented, authoritarian approach. Who would you want to follow in an emergency, for example? It probably wouldn't be the person who wants to convene a task force or do a survey before directing people to the exits!

In the real world, no continuum exists. One type of behavior doesn't cancel out the possibility of the other. Concern for the people doesn't exclude concern for the task. In fact, as in so many other areas of life, balance between the two orientations produces the best results. The more you can focus on both areas together, the more effective you will be as a leader.

Leaders who have come the closest to achieving that ideal, sometimes called shared leadership, seem to have the highest levels of both morale and productivity within their groups. Practitioners of shared leadership might say things such as "The purpose of our annual teacher appreciation week is to highlight the above-and-beyond work of our teachers and provide recognition and appreciation to the whole staff." This leader works on articulating the common vision for the group and reminds people about the overall goals.

If you are this kind of leader, you are concerned with keeping people on track by facilitating their work, not monitoring every detail. You ask for periodic check-ins regarding progress on the teacher appreciation event, or monthly reports at regular meetings. You ensure that members have the tools they need to get a job done.

As a well-balanced leader, you might provide the catalogs of teacher appreciation gifts but leave the final selection to the committee. Or you might ask for three recommendations to take back to the larger group for a vote. You foster trust and respect among group members, giving credit where it is due and helping keep the group focused. Sometimes you actively lead, and at other times you follow, depending on the situation.

People who cultivate their awareness of their inclinations toward one orientation or the other become more skilled at adjusting their behavior to suit both the situation and the needs of the group members. You can avoid the pitfall of assuming that you should always behave in a particular way because it is comfortable. Doing what comes naturally needs to yield to more conscious decisionmaking to lead most effectively.

People and Task: The Best of Both

The best leaders maintain balance between people and task skills. Here are a few ways to use and improve your skills. Follow these guidelines and you'll keep things running smoothly.

Focus on the mission. To keep on track, remind people why they are there. What is the point of the project or activity, and how does it relate to the PTO goals the group wants to accomplish?

Know your group. Seek out the special expertise, talents, and skills among members, and cultivate their contributions.

Delegate, don't hover. Remember, it's the product you really should be concerned about, not every detail of how the group gets there. That doesn't mean relinquishing responsibility. Establishing benchmarks and a time line and asking for periodic updates creates accountability without nagging or undermining the smaller group's ownership of a project.

Make sure you understand what people want or need. As author Stephen Covey put it in The 7 Habits of Highly Effective People, "Seek first to understand, and then to be understood." People are more likely to respond favorably to your request or direction if they know you have really listened to their concerns and understand what they mean.

Work on your group management skills. Managing the interaction among people with diverse backgrounds and interests can be quite challenging. You may need to brush up or develop your group and meeting management skills, including active listening and facilitation.

Expect and manage conflict. Conflict, inevitable in groups, presents us with the opportunity to grow and coalesce around common goals. It also may cause the group to fracture. Not everyone can be happy all the time, yet everyone can be heard when there is disagreement.

# Denise 2008-02-27 19:52
Very informative and helpful!
# Debby Petko PTA President 2008-11-12 01:36
I am having trouble with a board member because I will not state exact times for getting flyers etc. out. I always tell the board the event and tell them what needs to be done then ask when each one is available instead of saying this is going to get done today at 12:00. I feel that we are all vollunteers and that we can decide what hours we can be there. I really appreciate this article, maybe when I hane it out it will make things more clear to this Board member. Thanks, Debby Petko
Refresh comments list
RSS feed for comments to this post