Accessible Play: Fun for Everyone 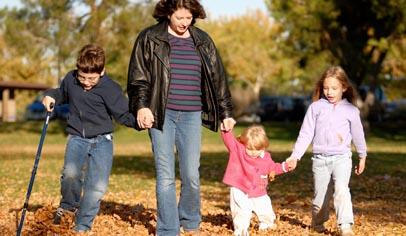 The best playgrounds are designed to be enjoyed by children of all abilities.

A student who used crutches to walk at Wiggins Elementary in Colorado found one place off-limits: the playground. “It was hard for him to move around or do anything in the pea gravel,” says Tracy Donaghy, who’s a kindergarten teacher and former president of the Tiger Parent Organization. “He could look at the playground but couldn’t get to it. We felt he ought to be able to play like everyone else.”

That simple goal is at the heart of efforts to make U.S. school playgrounds accessible to children of all abilities. The 17-year-old Americans with Disabilities Act prohibits discrimination on the basis of disability. Included in this law is the requirement that recreation facilities, including play areas, be accessible to individuals with disabilities. In 2000, the Architectural and Transportation Barriers Compliance Board (better known as the U.S. Access Board) issued the ADA Accessibility Guidelines for Play Areas, which lay out the rules for incorporating accessibility in new or renovated playgrounds. Existing, unaltered playgrounds are not required by law to be made accessible; neither are playgrounds designed for children younger than 2 years of age.

One requirement is accessible routes to the play area. “This is fundamental, but it’s an aspect that is often overlooked,” says Deborah Edsall, the managing director of Edsall and Associates, a landscape architecture firm based in Columbus, Ohio. These routes, usually sidewalks, must be at least 60 inches across—wide enough for two wheelchairs to pass each other.

At Altamonte Elementary in Altamonte Springs, Fla., the only way to reach the old playground was by climbing a flight of stairs or trudging up a sandy hillside. A new playground, finished last spring, includes a sidewalk that leads up a bank to a 12-foot-by-12-foot staging platform wide enough for wheelchairs. There’s also a tic-tac-toe game that can be manipulated by hand without requiring finger strength and an arch enclosing a ball, which children can tip back and forth. “For these kids to be able to go outside and commune with nature—that’s our biggest success,” says PTA president Danielle Marshall.

Another requirement for accessibility involves ground surfacing, which can cost tens of thousands of dollars. At Wiggins, the parent group has completed most of its new playground, including a poured-in-place rubber surface, concrete ramps, and a ground-level gazebo—all of which make the play area accessible to students on crutches and wheelchairs. The most expensive element, by far, was the surfacing, which cost $72,000. Luckily, a grant from the Colorado Department of Local Affairs covered about 75 percent of this cost; the grant required only that the surfacing be made from recycled tires.

Grant money from a different source paid for the poured rubber surface of the new playground at William F. Stanley Elementary in Waltham, Mass. The PTO pitched its project so convincingly in a presentation to the Waltham Handicapped Services Commission that the commission pledged $50,000 in support, money set aside specifically to ensure accessibility.

The routes and surfacing must allow all children to access at least one of each type of play equipment that is at ground level. “It’s not required that the entire surface be accessible,” says Peggy Greenwell, an accessibility specialist with the Washington, D.C.-based U.S. Access Board. “You just need to provide access to one swing, one climber, and so on.”

An additional requirement relates to the number of elevated play components. If a play area has 12 elevated structures, for example, then at least four of the ground-level components must be on an accessible route, and these components must represent at least three different types of activities. The purpose behind what is arguably the most confusing of the ADA guidelines for playgrounds is that a child who chooses not to use the elevated equipment should have access to plenty of variety.

Children also need to be able to get to at least half of the elevated equipment. For playgrounds with 20 or more play components, ramps with handrails are required. For those with fewer than 20 components, transfer systems or platform lifts are an acceptable substitute, though an inferior one because not all students will have the physical ability to make use of them. At Stanley Elementary, the playground has six different platforms at different heights. Four of these platforms can be reached by ramps, and the other two are adjacent to those that are accessible to ensure that no child is excluded. “There is no separation between where handicapped and abled children can go,” says PTO president Susan McKinney.

Features such as open sides, back supports, and hand supports are encouraged on transfer systems and play equipment to facilitate access, as are swing seats, spring rocker seats, and crawl-tube openings. Other considerations include making sure that tables and other raised play areas can accommodate wheelchairs and that children in wheelchairs don’t have to reach too far to interact with equipment.

The ADA requirements focus on physical accessibility, particularly for children who use mobility devices. But students face many kinds of challenges, and some playground experts emphasize that accessibility should be viewed more broadly.

“The idea is to create environments to cater to different abilities, learning styles, and skills,” says Nilda Cosco, director of the Center for Universal Design at North Carolina State University in Raleigh as well as associate director and education specialist at the Natural Learning Initiative. “I’m talking about any type of skill, from motor to cognitive to sensory to behavioral. ‘Accessibility’ in our minds is mostly thinking of access for children with disabilities like using a walker or cane or wheelchair. But there is so much more that you can do. You can create space to accommodate children with ADD or visual or cognitive impairments, children who don’t read the environment properly, who have orientation problems, who need guidance to go from one place to another.” She suggests signs to help direct children, along with well-defined pathways that guide students from one play area to another, and a circulation pattern to help prevent children from walking into swings.

Amy Jaffe Barzach, the executive director of Boundless Playgrounds in Bloomfield, Conn., recommends the incorporation of quiet, cozy spots for children, such as those with autism, who can become overwhelmed by the noise and chaos of a playground.

Barzach founded the company in memory of her son, Jonathan, who died of spinal muscular atrophy. She emphasizes that efforts to make playgrounds universally accessible will not only benefit all children but also create playgrounds that are more fun. “The very things you include can often be the most popular parts of the playground for children who can play anywhere,” she says. She offers as examples two little girls skipping through a doorway built wide enough for a wheelchair, kids crowded around an elevated sand table erected for children in walkers or leg braces, and a line of kids waiting to use the one swing with a back support.

This kind of interaction among all children is precisely what the accessibility movement seeks to make possible. In the early days of the ADA, acceptable play areas tended to segregate children with disabilities in a separate section of the playground. “But that’s not what current guidelines promote,” says Dave Yanchulis of the U.S. Access Board. “The focus is on creating opportunities for kids with disabilities to play beside all kids.”