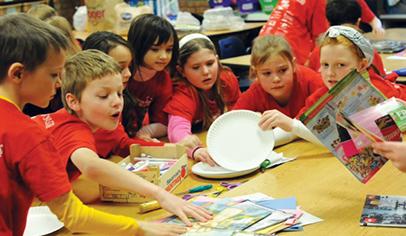 A day of educational and fun activities brightens up winter for Michigan students.

The Brighton, Mich., school’s PTO has mastered the art of taking big events and themes—from the presidential election and the Olympics to science and strength—and bringing them to students in the form of the fun and educational Special Interest Day.

“After the high point of the holidays, there’s the dreaded long winter ahead,” says PTO copresident Cari Pilon. “We picked a day at the end of January because it’s something to do that’s fun.”

Special Interest Day involves a series of physical and educational activities for the school’s 480 students, all tying into a new theme each year. The PTO has a list of all of the themes that have been used since the event started in 1996, and it tries not to repeat itself within any student’s time at the school.

“We work with the teachers on the themes,” copresident Nicole St. Laurent says. “It has been subject-oriented, like science and math, certain years if the teachers wanted that.”

The teachers do a monthlong lead-in, with fun facts during the morning announcements and art projects revolving around the themes. The 2015 theme was “Mission Possible,” a nod to the school’s yearlong theme, “Spencer Strong.”

The teachers are integral to the day itself, along with about 60 parent volunteers. Several volunteers staff each of five different stations, and a teacher and a parent volunteer rotate with each class. The groups are at a station for 45 to 50 minutes, with a 10-minute passing time.

There is typically a craft station, a community service activity, a snack station, an exercise activity, and a team-building activity. Past stations have included Zumba and karate instructors, a wild animal expert, and a toboggan run. In January 2015, there was a “make your own superhero shield” craft and a community service project to make cards for soldiers and blankets for a local children’s hospital.

Most of the $2,000 budget each year funds an outside group or speaker; at the 2015 event, the PTO paid for visits from two anti-bullying groups: the Superhero Training Academy and the Stand Strength Team, which tied into the Spencer Strong theme. Stand Strength performed stunts, like lifting the students on barbells and tearing phone books in half, while the Superhero Training Academy performed improv with a positive message for students. (The rest of the budget pays for snacks and craft materials.)

St. Laurent says that it’s helpful to have a core team of parents. “It’s nice to get new helpers and volunteers, but it makes a big difference when the same parents team up together to coordinate,” she says. “They figure out how it works and are able to keep the flow going for a couple years in a row.”

The copresidents say Special Interest Day brings Spencer together as a community. “It’s a heartwarming event,” Pilon adds. “Everyone looks forward to it every year.”

End of January/Day of Event