School Spirit in the Spotlight 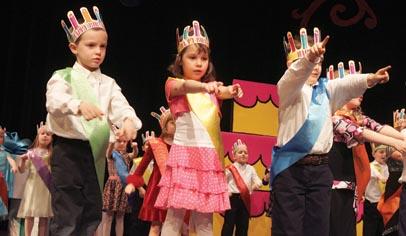 Hundreds of students, parents, and alumni take part in planning or performing in a major variety show event.

A small cadre of fathers creates lobby decorations. Down the hall, a parent distributes platters of food to feed volunteers who have worked past dinnertime. Later in the week, several moms stitch costumes in an art room while the music teacher works out the kinks in routines with one of the parent coordinators.

This is the scene just weeks before the annual schoolwide variety show at Kennerly Elementary, a tradition that has united the community more than any other activity at the St. Louis school. Each March, more than 300 children at the K-5, 400-student school perform in two evenings of song and dance. The variety show brings hundreds of parent volunteers together to work with and for the kids.

“This has definitely helped Kennerly build an even stronger sense of community and pride,” says event cochair Lori Krueger, “especially since it gives so many people opportunities to help where they might not have had a chance in the past with the more traditional school-related functions.”

The concept for the variety show was the brainchild of Krueger and fellow parent group mom Rhonda Miller. Seven years ago, the first Kennerly Variety Show was launched with the enthusiastic support of the principal and music teacher.

“The purpose of the show isn’t to showcase talent but to give kids a taste of being in a production,” explains Krueger, a past president of Kennerly’s Parent Teacher Partnership. “We wanted to give all kids the chance to perform, regardless of their abilities. We particularly wanted them to gain self-confidence and pride as they learned the value of hard work and discipline, qualities that extend well beyond the classroom.”

When you’re dealing with so many children, organization and planning become critical. Just making sure kids are available for practices is a challenge.

“We decided early on that we didn’t want to interfere with teaching or testing time. Plus we wanted to promote good relationships between the PTO, teachers, and administrative staff,” says Diane Colona, Krueger’s cochair and PTP past president. As a result, most rehearsals are held during recess.

To keep the show to two hours, the number of acts is limited. Each student is invited to perform with his or her “grade act,” which typically consists of a three- to five-minute song and dance routine. Students in 4th and 5th grades can also debut brief solo or duet acts. To encourage community participation, group acts such as those performed by Scout packs are welcome, as well. “We also feature a dads act, a choir act, and a teachers act,” Colona notes, “plus our principal always performs with a group.”

The finale includes the entire cast. “We’re dedicated to making this community-oriented,” Krueger says. “We even invite our student alumni back to join us for the national anthem.” The final show is followed by a cookies-and-lemonade cast party, open to all participants and their families.

The Kennerly Variety Show can only be successful with the efforts of countless parent volunteers. “We have 32 hard-working parents who head 19 different committees, each of whom is dedicated to producing a family-valued performance,” Colona explains.

The top organizational tier for the event consists of two PTP cochairs and the music teacher. A theme is chosen late in the school year, songs are selected for the grade acts during the summer, and choreography, decorating, and prop and costume design begin in autumn. Kids start practicing in January and continue until the show in early March.

Other key volunteer positions include:

“We make sure that the kids are entertained in the holding rooms,” Colona says. “We bring in clowns or magicians, play games, show the performance live on closed-circuit TV, and serve snacks. That way, the kids don’t get too nervous before their acts or too rambunctious after.”

The variety show isn’t budgeted as a PTP fundraiser. Initially, the event simply broke even. But as participation grew, so did ticket sales. Both performances routinely sell out, even with ticket sales restricted to no more than six per family. For the first time in 2007, the Kennerly PTP was able to donate $1,500 in profits to the Children’s Miracle Network to honor the daughter of a 4th grade teacher.

Ticket prices have increased from $3 to $5 over the years. Each child who participates is asked to contribute $10 to cover the cost of costumes, props, decorations, and snacks. Community group acts pay for their own expenses. Show expenses typically run about $3,000.

The PTP does very little publicity because each child has a ready-made audience of parents, friends, and relatives.

Principal Steve Suess is convinced that the chance to perform offers a unique education in itself. “The show provides a learning experience that cannot be replicated in a classroom,” he says. “Kids learn teamwork, collaboration, and empathy in a unique setting. I can think of no better venue for teaching character.”

For the theme of this year’s show, “What a Wonderful World,” each act was developed around the question “What makes you feel wonderful?” The six featured grade acts celebrated the joys of bath time, birthdays, Christmas, food, music, and summer.

To honor 45 years of service from retiring principal Suess, dozens of alumni joined the cast for the final number, “I Think You’re Wonderful,” an old song that kindergartners sing to their grandparents each year.

“We had 112 alumni show up for our surprise tribute to our principal,”?Krueger says. “Mr. Suess had tears in his eyes, as did most of the audience.”

This year’s show also included 51 students in 5th grade who acted as emcees, introducing acts and injecting a little humor into the show.

“Over and over,” Colona says, “we see kids who lack confidence find the courage to step out in a large group. I remember one 2nd grader who wanted nothing to do with the show. By the time she was in 5th grade, she was delighted to be doing a solo act.”

Tips from the trenches of Kennerly Elementary's variety show event.

# Michael Franzel 2008-04-08 01:38
Messed up the rating.
I was the first two votes and I didn't click the ratings correctly. 5 star article. If you want to see more about these shows, check out the website.