When it snows, Ramon David Santiago heads to St. Brigid School in Manhattan to shovel the walkways. When the gym teacher is out sick, Santiago steps in. When the school needs help supervising the students as they depart for the day, Santiago stands by the door. And when a kid needs to be consoled, Santiago listens and offers advice. 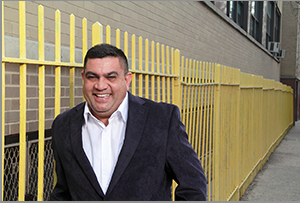 “I want to help the kids stay out of trouble, stay off the streets, to be somebody,” he says. “That’s why I volunteer.”

Several years ago, Santiago found himself with a very different type of challenge. A soldier in the U.S. Army stationed in Iraq, Santiago was seriously injured when a roadside bomb exploded near his convoy, killing several men in his unit. Santiago received a medical discharge after nearly 20 years of service.

Back home in New York City, Santiago had several surgeries to repair his injuries. As a retired soldier, he was grateful to be home with his family. And he also found himself with time to spare. So he started helping out at St. Brigid, a preK-8 Catholic school where his daughter was a student. This school year, she will be a high school senior and his son will be starting 4th grade.

Over the years, Santiago became the school’s go-to guy, handling everything from summer sports programs to, on occasion, opening the building on weekends if a repairman was called in. Because he lives close by, he was first on the scene after Hurricane Sandy in late 2012 and used a bucket to bail out water by hand.

Principal Donna Vincent says Santiago is a tremendous help and a good role model for the kids. “I was a new principal in 2008,” she says. “I was introduced to him, and the knowledge he had about the building and the everyday running of the school was such a help. From that day, straight through today, this man has been absolutely an invaluable volunteer.”