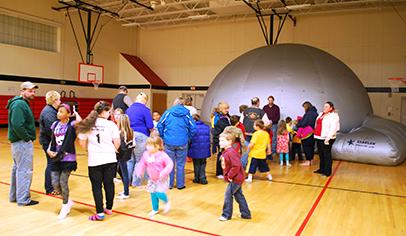 The Lisbon (Maine) Community School PTO wants its students to reach for the stars.

The parent group took over the annual Star Party from school staff several years ago and turned it into a can’t-miss event. Held in fall and drawing more than 300 people, the Star Party is a night of science and astronomy fun for families. With a budget of $700, the free event includes mobile planetarium shows, telescope viewings, arts and crafts, snacks, and science experiments.

“We partner with local astronomers who live in the area and can bring telescopes,” says Angela Shambarger, president of the districtwide PTO. “If the weather cooperates, the kids can see Jupiter, the phase of the moon, or any other planet that is visible that time of the year.”

While some students are using the telescopes, others attend shows in the gymnasium held inside an inflatable planetarium; the shows are arranged by a company that specializes in astronomy and science education. Students can take agility tests in the cafeteria that simulate astronaut training and test their fine motor skills for space by attempting to thread nuts and bolts wearing bulky gloves.

“We had scales where students could see what they would weigh on the moon, planets, and space in general,” says Lisbon PTO president Jennifer Libby, adding that the big hit was a 176-pound meteorite brought by a retired science teacher who had a “ton of information” for the children.

Lisbon’s technology teacher set up a station where students could play online interactive learning games on the NASA and PBS websites. Younger students got coloring pages and snacks, including Tang (the orange drink made famous by astronauts), star-shape cookies, and other space-theme food. And the food served as more than just fuel—the children re­created the phases of the moon with Oreos by cutting out a portion of the filling.

Students could also participate in a scavenger hunt, and winners received prizes on their way out.

Shambarger says parents and members of the community are eager to help the PTO with the event. The school and local town libraries had big displays promoting the night, and teenagers from nearby high schools offered to volunteer—including two students who had such a great experience at the Star Party as elementary school students that they wanted to give back and help. Fifteen to 20 volunteers help out at the event, about half high schoolers and half adults.

“A lot of people in your community are passionate about science,” Shambarger says. “The person who brought telescopes was a neighbor of a mom on the PTO board. Another mom has a connection to NASA. Someone mentioned the event to a librarian who then said she was interested in helping out. It’s all about getting to know your community.”

# Fatimamw 2019-09-13 03:55
How do I get information on getting an event like this at my child’s school?
# Emily Graham 2019-09-13 20:08
Hi, Fatimamw, Thanks for your question. This PTO created their own event, drawing upon resources in their community. You can look for amateur astronomy clubs in your area on the Astronomical League's website. https://www.astroleague.org/astronomy-clubs-usa-state

NASA has a lot of educational resources on its website at https://www.nasa.gov/stem/foreducators

Many science and children's museums make visits to schools, so if there are any in your area, I'd suggest checking with them. Good luck! —Emily from PTO Today
Refresh comments list
RSS feed for comments to this post