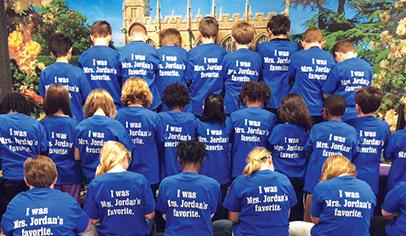 An Indiana parent group helps its community cope with the unthinkable while continuing to engage kids and parents at the school.

Last school year started out like any other for the Amy Beverland Elementary Family Association in Indianapolis, Ind. Parent volunteers organized a big welcome picnic and focused on the fall festival. The very active Amy Beverland Dad’s Club hosted a pancake breakfast and organized a basketball league. Then, one day in January, a school bus accident changed everything.

Not a Typical School Year

Principal Susan Jordan was outside monitoring afternoon dismissal when a bus jumped the curb and careened onto school grounds. While Jordan was pushing students out of the way, she was hit by the bus and lost her life. In the days that followed, the ABFA played a vital role in responding to the accident and helping the school community cope.

ABFA president Amy Bilyeu was at school when the accident happened. She talked with other parents, Jordan’s family, and staff that evening to see what they needed and how the parent group could help. Later, Bilyeu spoke to television reporters and represented the school at a school district press conference. Although classes were canceled for the rest of the week, the ABFA hosted a candlelight vigil and set up places there where anyone could come to share memories, make cards, and grieve.

The Dad’s Club, a part of the ABFA, gave every staff member and student a shirt emblazoned with “ABE Strong” on the front and “I was Mrs. Jordan’s Favorite” on the back; that’s how she made everyone in the school feel, Bilyeu says. Anyone who had a task that needed tackling during this somber time turned to the parent group for assistance.

“We held Teacher Appreciation Week in February this year, which turned out to be a good boost at the right time,” Bilyeu says. “Besides providing meals, treat bags, massages, and taking on recess duty for teachers so they could spend an hour at lunch, we also gave each one a charm or lapel pin with the year and Mrs. Jordan’s initials engraved on them.”

While the Amy Beverland parent group absolutely demonstrated its dependability in the face of such a situation, it also boasts an impressive array of events and ways to engage parents—including its group for fathers.

The ABFA opens the school year with an annual welcome-back-to-school picnic. In its first year, 800 people showed up. In fall 2015, the ABFA and Dad’s Club served more than 1,000 parents and students.

“We have no agenda for this event,” Bilyeu says. “ABFA provides the hamburgers, hot dogs, chips, and popsicles and the dads grill. We have a DJ playing music while our officers mingle and let everyone know how they can help, but we don’t hard sell volunteering.”

As the school year progresses, the group makes a more concerted effort to recruit volunteers. Before back-to-school night, a parent-only event, Bilyeu and the Dad’s Club president record a video message describing what each group does and how it benefits the children. At the event, a table is set up in the lobby to capture email addresses of all the parents and guardians in attendance. The ABFA uses the email addresses to ask for online volunteer sign-ups for each event.

The Dad’s Club formed more than 10 years ago, when some of the fathers decided they wanted to be more involved with school activities. The club currently has about 20 active members who play key roles in planning events and activities, like an in-house basketball league for 1st and 2nd graders that focuses on teamwork and fundamentals over competition.

In early December, the dads host a pancake breakfast with a surprise visit from Santa, an event that coincides with the school’s book fair. The breakfast and Family Fun Night, which includes a pizza dinner and photo booth, are free for families, although both groups accept donations to defray food costs.

The ABFA and Dad’s Club activities raised close to $90,000 for the year. The majority of the money came from annual activities including the fall festival, selling spiritwear, a spellathon, and a golf fundraiser. With the blessing of Jordan’s family, the golf event was renamed the Susan K. Jordan Memorial Golf Outing. Tickets to the event sold out.