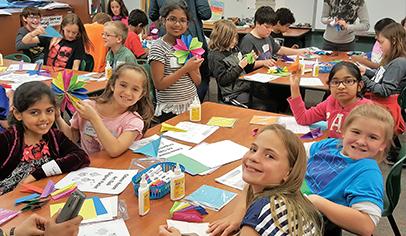 Cool events and creative efforts from entries in the 2016 Parent Group of the Year search.

To attract more parents to PTO meetings, the Baldwin Elementary PTO in Manassas, Va., worked with teachers to create student awards. The Rocket Award for academics and the Bucket Filler Award for character winners were chosen by teachers at each grade level and presented at quarterly PTO meetings. Information about the awards was posted on the school website and Facebook page, and winner photos were featured on the school bulletin board. As a result, regular meeting attendance increased from five parents to 25.

The Fort Garrison Elementary PTA in Baltimore, Md., includes an often-overlooked group in its appreciation efforts by organizing a back-to-school breakfast for bus drivers. The breakfast is held during the first week of school and provides donated bagels, fruit, juice, and other items.

The Bellevue (Mich.) Elementary PTSO found a fun way to promote character education and get kids excited about the school carnival at the same time: In the months leading up to the carnival, students were awarded tickets when they were observed going above and beyond. As prizes, several donated bicycles and helmets were raffled off at the carnival.

The Rochester (Mich.) PTA Council has a great “reuse” program at the end of the school year: It sends PTA members to each school during locker cleanup to gather usable supplies that have been left behind. The school supplies are then sorted into bags and given to teachers in the neighboring Pontiac school district, which has struggled financially.

One fun way the Newport (Ohio) Elementary PTO got kids ready for testing days was by writing encouraging messages and tips in sidewalk chalk at the school entrance. Tips included “No guessing,” “Get rest before the test,” “Take your time,” and “Don’t get brain drain.” In addition, students made wall hangings to encourage other classes during testing time.

The Spring Hill Elementary PTO in McLean, Va., kicked off the year by hosting a series of Coffee in the Courtyard events with the school principal. Because the school is so large—it has 980 students—many parents don’t get the opportunity to connect personally with the principal; the goal was to create a sense of community with smaller gatherings. Parents could meet others with children in the same grade level and also hear about some plans for the school year.

When the after-school art club at Colene Hoose Elementary in Normal, Ill., turned out to be far more popular than expected—204 of the school’s 530 students signed up—the PTO found a creative way to make it work by contacting the art program at a local college. A graduate student who was getting her master’s in art education agreed to plan all of the activities and to teach, and several other students volunteered each week. The year ended with two art shows featuring more than 1,000 works of student art between them. Art supplies were donated by local businesses.

It’s a Chat, Not a Meeting

The Crestridge Magnet Center PTO in Omaha, Neb., found a great way to engage parents who weren’t interested in attending meetings by forming the Parent Chat Club, which met every Friday morning. They spoke in Spanish and English as a way to let parents practice their language skills and also discussed culture, took part in activities, and shared tips on helping children succeed in school. Fifteen to 20 parents attended each week, and the PTO found that they had more volunteers and better attendance at events.

The Riley Elementary PTO in New Castle, Ind., created an incentive program for parent volunteers. At each meeting or event, volunteers receive a Riley PTO Buck. The Bucks can be used to purchase VIP seating at school events, including the annual Christmas program and 6th grade graduation.

Another bingo variation, Grandparent Bingo Night, was hosted by the Sandpiper Shores Elementary PTA in Boca Raton, Fla. Grandparents, aunts, uncles, and other important adults were invited to play bingo with their grandchildren. The night became highly competitive as grandparents attempted to win prizes for their grandchildren, and the festivities wound down with a handprint craft made by the kids for their elders.

Something Special From Santa

The PTO at Inyokern (Calif.) Elementary added some excitement when “Santa’s helper” visited the school: The group provided a wrapped present for each student. Students had the opportunity to talk with Santa, have a photo taken, and receive the present. The gifts were school supplies, chosen by grade level—crayons for kindergartners and markers for 5th graders, for example. Even the “jaded 5th graders” were excited, according to the PTO.

A Hug Saves the School

Faced with the threat of the school’s closure, the Sandymount Elementary PTO in Finksburg, Md., organized a school “hug” to illustrate the importance of the school to the community. More than 600 people turned out to form a human chain around the building, which serves 460 students in grades preK-5. The event was followed by an ice cream social. It received coverage in local media, and the school was eventually removed from the district’s cut list for the year.

Each October, the Lee Elementary School of Technology PTA in Tampa, Fla., holds a reading festival with some fun elements. Each classroom features a parent or teacher reading a different book and leading a discussion about it. Students receive a passport and get it stamped at each room. At the end of the night, they receive a free book. A book swap of gently used books is held, and kids decorate a pumpkin based on a book character.