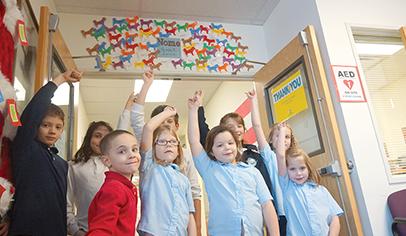 The Iditarod, a major hometown event, serves as the inspiration for a schoolwide literacy program.

It isn’t easy to find a clever way to motivate kids to read, but the PTO at Eagle Academy Charter School in Eagle River, Alaska, uses one in its own backyard.

For nearly a decade, this parent group has run an Idita-Read program as an annual reading event. The inspiration comes from the annual Iditarod sled dog race, a competition that tests the fortitude of dogs and sled drivers, or mushers, as they trek across nearly 1,000 miles of Alaskan terrain. The Iditarod Trail passes through Eagle River.

At Eagle Academy, the PTO sets up an indoor version of this famous race that may not have the harsh Iditarod conditions, but in its own way challenges the endurance of students. The program begins in early March, to correspond with Read Across America Day, and runs through the month.

Students volunteer to participate in the Idita-Read with a goal of reading or being read to for approximately 1,000 minutes to complete the race. If they make it to the finish line, they receive a certificate of completion and an invitation to the annual Mushers Celebration. (The actual number of minutes differs slightly each year and is based on the route of the official Iditarod. There are two routes, used in alternating years. One route is 975 miles long and the other is 998.)

The Idita-read event is run by about five volunteers, currently headed by PTO chairwoman Jennifer Bundy. The group creates a racecourse in the school by setting up several checkpoints in the hallways. Each checkpoint is designated by a laminated sheet of paper and includes the name of an official Iditarod checkpoint. The track finishes in the school’s lobby where there is a spot labeled “Nome,” the Iditarod’s finish line.

Each student reader gets a laminated paper dog, measuring about 2 inches by 3 inches, with his name on it. For the dog to advance along the route, a student must complete a certain number of reading minutes per checkpoint. The PTO doesn’t use all the checkpoints that are included in the Iditarod, so the number of reading minutes per checkpoint varies year to year. Instead, it creates checkpoints (usually five to seven of them) based on the number of prizes available.

When students advance to a new checkpoint, one of the Idita-Read parent volunteers moves the dogs, which are attached to the wall with painter’s tape. The checkpoint signs are close to the ceiling, requiring volunteers to use a ladder when moving the dogs! The volunteers maintain a spreadsheet of all participants’ activities—including minutes read, checkpoints completed, and prizes received—to ensure that all dogs are moved when they should be.

When a student gets to each checkpoint, he receives a prize. The prizes are small and are usually something like pencils, bookmarks, rulers, or coin purses. The PTO also uses Scholastic dollars from its annual book fair to purchase books to use as prizes.

Bundy says the Idita-Read theme is common in Alaska. In fact, there is a national Idita-Read program that students can join online (at www.readaroute.com) to track minutes and get book ideas. Eagle Academy hasn’t tried the online version yet, in part because the current approach is working so well. In 2012, 124 students participated, and the number jumped to 134 out of 176 students last year.

“What’s great about the program is it not only helps promote reading but it makes the kids feel good about themselves,” Bundy says. “They enjoy seeing their names on the dogs and trying to find their names. When they see their name, they think, This makes me special.”

Look for bargain items throughout the year that can be used as prizes. Seek prize donations from local companies.

Send home a letter to announce the start of Idita-Read.

Set up Idita-Read checkpoints at school.