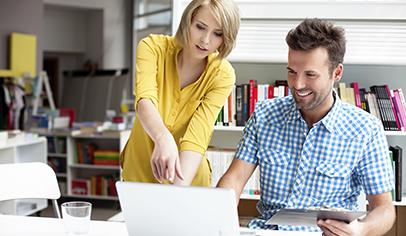 Working in tandem doesn't have to be difficult. Following a few simple guidelines will help you reap the many benefits of having a partner.

Two people, one job. It sounds so powerful. Two people sharing the responsibilities and the rewards of a single position. It's called job-sharing in the business world. For parent groups, it takes the form of cochairpeople or even copresidents. Think about it: Two people can accomplish so much more than one. By sharing the tasks, neither person gets overburdened or burned out. And time constraints become less of a concern. When one person is unavailable, the other simply steps in.

A cochairing relationship can be great, and it can work just like that. But a dysfunctional cochair relationship can easily degrade into a frustrating tangle of miscommunication, duplicated efforts, and dropped balls. Styles clash. Arguments boil up over seemingly trivial decisions. One chairwoman is stuck cleaning up for the other. No one knows whom to call, and the bad feelings spill out to the general committee volunteers. So how do you make sure your cochair or co-officer arrangement is the positive kind and not the negative?

The potency of successful cochairs far exceeds the possible negatives. At its best, an event or project is completed on time, within budget, and to the resounding accolades of the students and school community. Both volunteers feel satisfied knowing they pulled together to put on a great event. Along the way, they've strengthened their friendship by working closely together, and no one feels burned out. "I think the biggest plus to a cochair is sharing the load and not feeling so overwhelmed," says Tracey Shelton, a PTA member at Abbotts Hill Elementary in Alpharetta, Ga. For large projects especially, cochairing can be an effective training process. "It's great for a mentoring situation where a seasoned volunteer grooms a new volunteer to take over the project the following year," suggests Karen Koshen, former president of Oakley Park Elementary PTA in Walled Lake, Mich. And, she adds, "If one person has a situation where they are unable to fulfill their commitment, then there's someone already up to speed who can keep the project on task."

Cochairing establishes a partnership that allows each volunteer to apply her respective talents. The synergy created can inspire fresh ideas, too. Here are a few tips to ensure that your cochairs stay friendly and productive through it all.

Divide the responsibilities clearly. Start by agreeing on how you will divide the work. For a complex project like an auction or carnival, be specific and write it down. If you're not sure of the tasks involved in your project, speak to the past chairwoman, review the project files, and brainstorm. Make sure your committee volunteers know the division of responsibility, too, so they know which cochair to call with questions. Koshen suggests dividing the tasks based on each person's strengths and weaknesses. As half of the management team for a raffle, she says, "I did a lot of face-to-face solicitation for donations, whereas my cochair preferred to do more of the organizational aspects." Shelton echoes the sentiment. "I cochaired a book drive at our school. It worked out well in part because I was new to the school and the other mom knew her way around." Randa Murray, cochair of the printer cartridge recycling program at Scotch Elementary PTO in West Bloomfield, Mich., suggests sharing the dud jobs equally, too. "We take turns handling the large laser cartridges that get recycled. They're messy and a pain to prepare for shipping."

Communicate frequently. Successful cochairs talk with each other often. As issues arise, you need to discuss, decide, and move on. "Communication is probably the biggest key to our success," says Debbie Ramsey, Murray's cochair at Scotch Elementary. "We don't assume; we ask." Adds Murray: "We copy each other on every email, every note we send to the principal. We're also making sure our files are complete so next year's chairperson has all the information she needs to get started quickly."

Be reliable. Do what you say you'll do, and share the load equally. That's a basic expectation of a cochair relationship. Otherwise, you'd have a single committee chairperson and an assistant. Give your cochair time to regroup if you discover that you're having trouble doing your part. Once tasks are assigned, a cochair should be confident that her counterpart will do what she has agreed to. Don't leave your partner with a mess if you bail out unexpectedly. Teresa, a parent group leader who asked to be identified only by her first name, found out the hard way that her cochair didn't have time to devote to their PTO's family game night. You need "someone who is responsible enough to get the job done when they say that they will," she says now.

Stay on task. Resist the temptation to do the work of your cochair. You'll avoid duplication of effort and possible hurt feelings by sticking to your scope of responsibilities. Feel free to offer advice, but don't push her aside.

Does it matter who you "co" with? Given the option, "I prefer to pick my cochair as opposed to being assigned a cochair," Koshen says. "I'm a detail person-some would say perfectionist-which makes it challenging for me to work with someone who's more casual. In one case in particular, I felt the need to redo some of my cochair's work, but I didn't want to hurt her feelings. It was an uncomfortable situation because we had such different styles." Shelton adds, "Even with a cochair, I think someone ultimately steps up and does a bit more. You are always going to have one cochair who is checking things off a list to make sure they are completed." The trick is to get the work done without being dismissive of your partner.

Be flexible. It's unproductive to needlessly debate a minor point. Be flexible and compromise once in a while. This isn't a contest to see who can accrue the most decision points. If you're sharing the authority, you may have to give in once in a while. Just don't lose sight of your real focus: the students.

Amy, who asked not to be identified, was active in her school's PTO when she decided to cochair the staff appreciation committee with another active volunteer. "We knew each other, so we assumed we could easily share the responsibility," she says. But the women quickly discovered that they each had specific ideas about what staff appreciation entailed. Neither woman's ideas were necessarily better; they were just different. "We should have divided the responsibilities right at the start, but instead we got hung up on trivial matters like tablecloths and luncheon favors. It was hard to compromise because we both felt we were in charge," Amy says. "We had some tense conversations, but we finally agreed how to split up the remaining work. We're still friends, but I learned firsthand how important it is to be flexible when cochairing."

Originally published in 2014 and updated regularly.