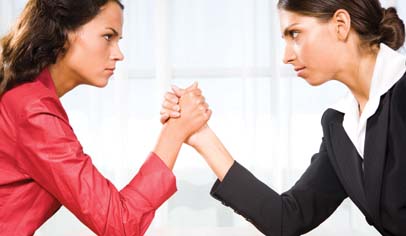 To deal with criticism effectively, leave your emotions out of the conversation.

No one likes to be confronted with criticism, but unfortunately it’s inevitable when you take on a leadership role. No matter how good you are, there will be people who disagree with how you handle a situation or make a decision. An important and often underappreciated element of being a good leader is dealing with criticism of your group or of you personally in a professional and appropriate way.

Criticism has two elements: fact and emotion. A standoff laced with emotion over why the fundraiser failed will do much more harm than good. Emotions tend to make people express themselves more strongly than they really mean. A disagreement becomes a dispute, and opinions are drawn in terms of black and white. In this situation, only two answers are possible: right or wrong. Others are forced to choose sides.

On the other hand, a rational discussion might help you evaluate the situation and make better decisions in the future. Your job as a leader is to take emotion out of the discussion as much as possible and get down to the nuts and bolts.

Yes, that’s easier said than done. You commit your talents, time, creativity, and energy to the group. When you're faced with criticism of the PTO, it’s very hard not to feel personally attacked. That’s human nature. The challenge is to try to separate your feelings from the negative comments. Share your hurt with a (non-PTO) friend over coffee, but keep a stiff upper lip and an open ear when you’re in your role as parent group leader.

Always try to look at situations from the other side, especially when a complaint hits close to home. Your natural reaction will be to defend your PTO, but maybe the complainer has a valid point. You might discover that things look different from another perspective. It takes strength to admit you’re wrong, but doing so will be better for you and the whole group in the long run.

When Is It a Complaint?

Don’t overreact to hearsay. Unless you have reliable knowledge of someone’s complaint, it is just idle gossip that should be ignored. When you are personally confronted with criticism or complaints, handle the situation with a face-to-face conversation.

It might be easier to send an email or leave a message, but that won’t address the issue. Muster the courage to talk to the complainer directly. Explain your position, come to a compromise, or agree to disagree, depending on the situation.

Some complainers are ill-informed. Before someone’s whining infects the group, explain why your PTO did what it did. Suppose a parent complains about the PTO’s recent reading night: “It wasn’t nearly as nice as last year.” Explain that a big price increase required that you cut down the serving size for the free pizza. Explain that it was the principal’s decision not to open the gym for free play. Clarify that there were fewer game booths because fewer parents volunteered to help. Sometimes the PTO is constrained by finances, volunteer resources, and the administration. People who complain usually don’t understand all those factors. You may be able to counter the criticism with a simple explanation.

We’ve all been in meetings with the one member who always has a criticism. She complains about everything, from the small number of community sponsors in the yearbook to the quality of the audio at the PTO’s movie night. Your public persona makes you smile and nod in polite acknowledgement while inside you’re screaming “Don’t you ever have anything nice to say?”

You can ignore the loudmouth, but that strategy only goes so far and can, in fact, backfire. A better idea is to listen attentively, then ask her to get involved to improve the situation herself. For example, agree that yearbook sponsorship is down and invite her to be in charge of soliciting sponsorships this year. If she accepts, give her support but let her learn firsthand the challenges faced by others who have taken on this job. If she declines, you have been respectful but firm and you need not feel pressured by her in the future.

If the loudmouth is really just griping for the sake of griping, be polite but end the conversation before her negativity derails the group’s enthusiasm. There is no need to get tangled in an unproductive debate. Thank her for her comments and move on.

She’s not one of the popular PTO volunteers. She’s new to the area, her kids seem rambunctious, and she’s pushy. She’s always harping on how much better the PTO was at her child’s old school. She’s annoying, and you’d rather avoid getting into a conversation with her. But wait! This newcomer could bring a wealth of ideas and insight to your PTO.

It’s no secret that change can be uncomfortable. Most of us prefer to keep things as is even if quietly we confess that they could be better. Change brought about by a brash newcomer can be especially hard. She doesn’t know your PTO. You’ve tried all those ideas before. Your community is different. Where was she when you built this PTO?

Try to stop being defensive. Don’t shy away from new ideas simply because you are content with the status quo. You don’t have to adopt every project or fundraiser she suggests, but you might find out that this whiner could be a great addition to your PTO.

Remember the Scope of Your Control

Because you are viewed as a link to the administration, people sometimes will complain to you about the school, the staff, or the teachers. Parents might assume that you have a direct line of communication to the principal. Plus, it may be easier for them to approach you, a fellow parent, than to confront the principal directly. But be careful about lending a sympathetic ear. You are representing the whole PTO, and you shouldn’t be used to deliver someone’s personal gripe.

If parents are complaining as a group about a common issue, it might be appropriate for you, as PTO leader, to address the issue with the administration. For example, several people approach you about traffic in the school parking lot, so you meet with the principal to discuss it.

On the other hand, if one parent whines to you about his child’s teacher’s homework policy, stay out of the discussion. Even though you are head of the PTO, you are not responsible for resolving personal conflicts between parents and teachers. Just smile and say “I hear your frustration, but that is outside the scope of the PTO. I suggest you speak to the teacher directly or set up a meeting with the principal.”

Leaders need to be able to handle criticism without taking it personally, especially because they may be able to learn from it and use it to improve the PTO. If a parent approaches with a complaint, the conversation can also strengthen the parent’s connection to the PTO. By developing strategies for handling tough situations, you can avoid hurt feelings on either side and respond in a way that allows everyone to feel their input is valued, regardless of the final outcome.

# Kathy 2013-06-07 13:55
When a parent complains to me I usually try to work with them but when they get mean and ugly I always say "Well then parents need to step up and take charge" that usually stopped it right then.
Refresh comments list
RSS feed for comments to this post