Growing Up With Grandparents 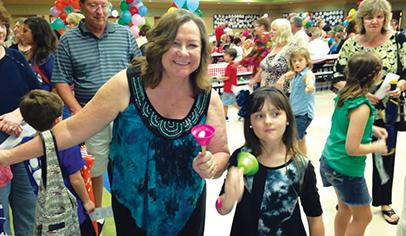 An evening event with a movie theme strengthens the bonds between generations.

These days, grandparents’ roles can vary greatly. Some live close to their grandchildren and can attend dance recitals and sports games. Some play host for school and summer vacations. And some grandparents take on the role of full-time caregiver.

The bond between children and grandparents is one that the Keene’s Crossing Elementary PTO in Windermere, Fla., wants to help foster. In September 2013, following several years of hosting a school-day event for Grandparents Day, the PTO organized its first evening event, “Growing Up With Grandparents,” to celebrate both the occasion and the importance of the relationship.

The event was centered on the movie Up, which is in large part about the bond that develops between an elderly widower named Carl Fredricksen and a young boy, Russell, as they set off (somewhat haphazardly) for South America by tying thousands of balloons to Carl’s house.

Keene’s Crossing PTO president Jennifer Benton says the idea for the Up event came about because the school has experienced “tremendous growth” that made the previous lunch and desserts event for Grandparents Day difficult to continue. As well, she says, having the event during the school day had the potential to make children who don’t have grandparents or whose grandparents couldn’t attend feel sad or ostracized.

“We thought it would be more successful to keep [the event] separate from the school day,” Benton says, adding that once the decision was made, the plans were put together in a matter of weeks for less than their projected budget of $600.

For the inaugural Up event, held the Friday night before Grandparents Day, Benton says the goal was to organize movie-theme activities that the kids could enjoy with their grandparents. To replicate the idea of Russell earning badges as a “wilderness explorer,” organizers set up activity stations at the school and asked local Boy Scout troops to help pass out maps and “merit badge” holders. Grandparents and students visited stations to earn merit badge stickers—for example, a caring station with stuffed animals and vet and doctor kits where students tended the animals and earned a bandage sticker; a reading station, where kids and grandparents had to say a tongue twister together to earn a book sticker; and a healthy eating station where visitors went through the lunch line and learned how to eat and pack a healthy lunch to earn a fruit sticker.

Also in keeping with the movie, the cafeteria tables were covered in red-and-white-checked tablecloths where attendees enjoyed a picnic dinner that included pizza and sandwiches. Students were asked to write something nice about grandparents on paper clouds that were hung around the picnic area. And as guests left, they were given a helium balloon with a postcard from Paradise Falls, Carl’s destination in the movie, that said “Remember, the best adventures are the ones we share with our grandparents!”

Benton says a memorable turn of events was the unplanned photo stand-in for Carl, a Keene’s Crossing grandfather whose grandchild was sick and unable to come but who attended the event anyway—and who, when organizers noticed his strong resemblance to the movie character, gamely agreed to pose with kids for pictures, balloons in hand.

“He was like an honorary grandfather,” Benton says. “[It] really captured the importance of that bond.”

In fact, encouraging that generational connection for the Keene’s Crossing community is so important to the PTO that after the event, it reached out to a local foster grandparent program to pair up children who don’t have grandparents with elders eager to step in as substitutes.

For Growing Up With Grandparents, Benton says that students without grandparents or whose grandparents live too far away to attend were encouraged to bring a substitute elder. And with the foster grandparent program, the hope is to create bonds that last far beyond that one evening.

Setting Up for Grandparents Day