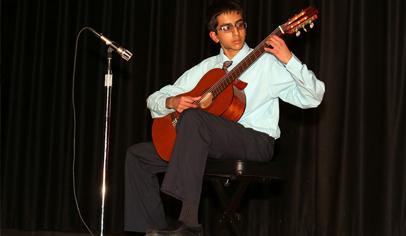 For its inaugural talent show, the Kingsview Middle School PTSA put dozens of students to work behind the scenes and used social media to build buzz among middle schoolers. That strategy worked. About 400 people attended Kingsview’s Got Talent at the Germantown, Md., school.

The March 2015 event’s name was a nod to America’s Got Talent, but for the most part it was different from the TV show. “We wanted to showcase talent not just in the performing arts, but behind the scenes,” says event chair and corresponding secretary Laurie Williams. “Students were involved in the promotion of the event, making posters, video and photography, and helping backstage.”

To audition, students submitted a 60- to 90-second video of their talents. The PTSA had 27 entries—about 40 students—and allowed every student to participate. The performers included dancers, guitarists, pianists, and vocalists.

A middle schooler served as the stage director and two others were emcees, Williams adds. Approximately 35 students had roles backstage manning the lighting and camera, coordinating acts, and running the concession stand. Six PTSA board members planned the event and 12 parents assisted during the show.

Because participation and attendance at school events can drop off at the middle school level, the PTSA promoted the show in a number of ways. “With middle schoolers, there’s a wait-and-see attitude,” Williams says. “‘Is it going to be a cool event?’ We did a lot of things with Instagram and used a hashtag to pump it up.”

“We played videos on the morning announcements and pushed the fact that if they showed up, they could use their smartphones to vote,” president Kim Summers adds. “Kids were excited they could be in on the action.”

Audience members could vote for their favorite performer by texting a number or scanning a QR barcode listed in the program corresponding to each act. “The kids were like, ‘Huh, maybe they do know what they’re doing,’” Summers jokes.

The show’s judges—who were members of the community involved with performing arts and unrelated to the school—did not provide commentary, but they tallied score cards with points for talent, creativity, and audience appeal.

The group of judges included a music instructor, drama instructor, and dance teacher. They received free advertising for their business in the show’s program and on the PTSA website.

Cash prizes of $100, $50, and $25 were awarded to first-, second-, and third-place winners, with a $50 prize for the audience choice. A group of four female dancers won first place. The students dressed in black and taped glow sticks to their clothes. When the lights were turned off, Williams says, the students looked like dancing skeletons.

The free event had an $800 budget. The PTSA sold items at a concession stand and foam fingers that audience members could use to cheer on their favorite acts. About $400 went to Kingsview’s music and sports departments.

“Next year,” Williams says, “we expect even more participation on and off the stage.”

Preparing for Kingsview’s Got Talent