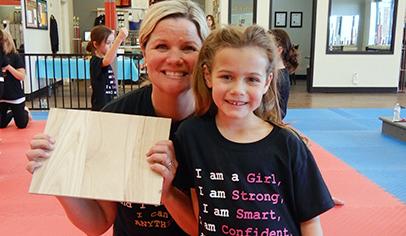 The Country Trails Elementary PTO in Elgin, Ill., planned a mother-daughter taekwondo night not just to do something different: It wanted to give both moms and girls a chance to bond and celebrate body confidence, self-esteem, and female empowerment.

The idea stemmed from PTO member Tara Christiansen, who wanted an activity where moms and daughters would interact. “We had events that had mothers in one corner and daughters in another corner,” Christiansen says. “Not a whole lot of bonding.” 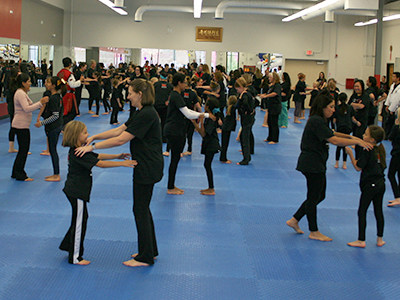 “Girls always end up with events that cater [to] their girly side,” adds Camilla Hansen, the PTO’s cosecretary and communications lead, who says Christiansen inspired the group to do something “empowering.”

Christiansen’s family are members at Bill Cho’s United Taekwondo Center in Elgin, so she reached out to ask about hosting a class mothers and daughters could attend together. The studio offered not only their space; but also a class instructed by one of their grand masters, all free of charge.

The PTO promoted the taekwondo night through their regular e-blast, and reception was so positive that they had to break up the event into two nights: kindergarten through 2nd grade on one night and 3rd through 5th grades on another. Nearly 50 mothers and daughters participated over the two nights.

The PTO ordered shirts for all participants that read “I am a girl. I am strong. I am smart. I am confident. I am loved, and I can do anything.” The shirts had an added bonus of creating uniformity, so none of the girls had to worry about their outfits. “It put everyone on the same playing field,” Christiansen says.

No phones were allowed during the class, so everyone could fully unplug, participate, and learn.

“We all live very busy lives,” Christiansen says. “To hold onto hands of your daughter and look them in the eye—it almost makes you very teary. [During class] you give everything else up and focus on that one person.”

“Seeing parents be present—kids really benefit from that,” says Althea Richards, the taekwondo instructor who led the classes.

During class, the duos learned basic movements that align with the meaning of taekwondo: tae, or kicking, jumping, or action with the foot; kwon, punching or action with the hand; and do, the way of life. The mothers and daughters completed push-ups, jumps, meditation, hammer-fist board breaks, and self-defense moves. The moms also performed planks, and the daughters crawled underneath them. 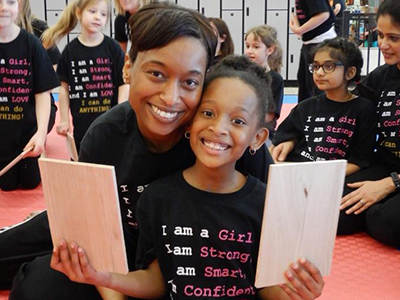 The exercises were designed to establish a connection between the pairs by having them work together, Christiansen says. The group also spoke about self-respect and helping one another. 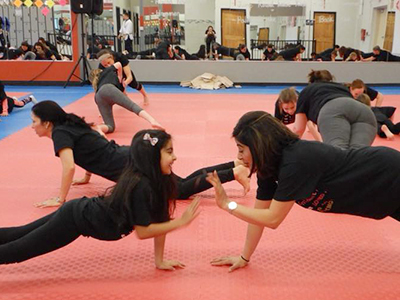 At the end of class, the studio offered swag bags and future class discounts to excited participants.

“My 5th grader loved the class and ended up taking taekwondo for the rest of the school year,” Hansen says. “Several girls also signed up for additional classes at the center.” 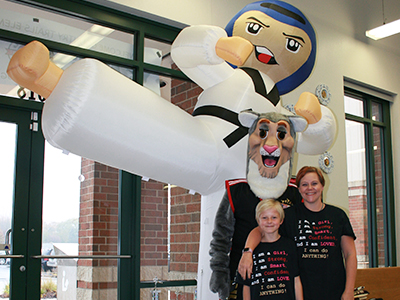 “There are stereotypes around martial arts that it is fighting and for boys,” Richards adds. “It is empowering to see that it is so much more than what they imagined.”

The PTO hosts four parent-child events each year and is eager to try other combinations for taekwondo, including a mother-son or a father-son version. For now, Christiansen holds fond memories.

“I can remember laughter and smiles,” she says. “Girls are still wearing the shirt—you can see up and down the halls.”

Tips for Planning a Taekwondo Night

Use your connections. Country Trails families already had a great relationship with the local taekwondo studio, which provides the school with discounts and raffle prizes for other events, so it made the ask simpler.

No connection? No problem. Don’t be afraid to reach out to your local taekwondo or karate center. Althea Richards, master instructor at Bill Cho’s United Taekwondo Center, says that black belts have a requirement for community service, so studios are often happy to partner with schools as a way to fulfill their mission of helping others.

Design simple T-shirts in advance. Christiansen says the PTO saved money by sending a design to its T-shirt vendor six weeks in advance and sticking with basic colors. “The more advance notice you can give the T-shirt companies, the cheaper the price,” she says. “I also learned that the more colors you use on the shirts the more expensive they are.”

Look for the biggest venue possible. Although splitting the mothers and daughters into two groups worked out fine, the PTO would like to keep the entire group together moving forward for even more camaraderie. “It would be nice to have everybody together,” Christiansen says.