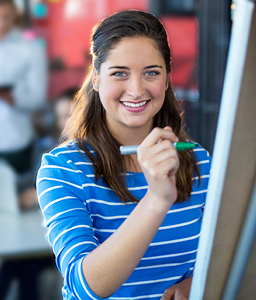 Leading a parent group isn’t simply doing a series of tasks for a year or two until someone else takes over. It involves setting a direction for how the group will be run and the way decisions are made. Members will look to you to set the tone for the group. And they’ll look to you to set goals and expectations.

But having committed leaders in place who are working to make their schools better are what it’s all about. So whether you’re newly elected to a position with your school’s parent group or just thinking about taking on a leadership role, our free New Leader Kit covers all the know-how you need to be an effective and successful parent group leader.

Inside the New Leader Kit:

You’re President. Now What?
Planning Checklist
Presidential Dos and Don’ts
Robert’s Rules and Meetings
Leading the Executive Board
Delegating and Micromanaging
Resolving Conflicts
Parent Involvement and Volunteer Recognition
Advice From Those Who’ve Been There

Research into how leaders behave has long pointed to two basic orientations: people-centered and task-centered. People-centered leaders say things like “Feel free to do it however you think is best” and “Use your own judgment.” Most of the time, people-centered leaders let group members set a pace that is comfortable for them rather than making them following the leaders’ timeline. If you’re a people-centered leader, you probably try out your ideas with the group and ask for ideas frequently. Your willingness to make changes agreed upon by the group is clear. You want everyone to be happy about doing this job. It doesn’t much matter how it gets done or even when; every voice must be heard.

Task-centered leaders tend to say things like “Everyone needs to pitch in more to get this job done” or “I want this job done the right way.” Task-oriented leaders often create guidelines or rules for each task. Rarely would these leaders consult the group members before acting. Instead, a task-oriented leader would probably let members know what she’s decided and would then inform them exactly how the job is to be accomplished. You probably have a low tolerance for uncertainty or postponement. Endless processing of group opinions and feelings is definitely not your thing. Let’s get this job done!

Of course, each side has advantages and disadvantages. Leaders who are always at the people-centered extreme might keep people happy at the expense of getting the job finished, but the people involved might feel more motivated to continue working toward group goals. Leaders at the task-centered end might get the job done well, but they risk alienating the members they depend on, possibly compromising the group’s ability to function effectively in the future.

As in so many areas of life, finding a balance between the two orientations produces the best results. The more you can focus on both areas together, the more effective you’ll be as a leader. If you’re this kind of leader, you’re concerned with keeping people on track by facilitating their work, not monitoring every detail. You articulating the common vision for the group and remind people about the overall goals.