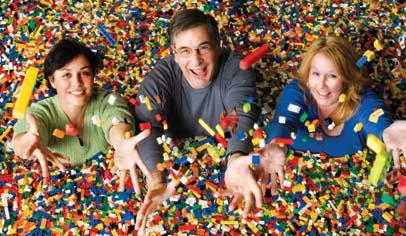 A whole lot of Legos plus a few project suggestions add up to a fun, easy event for the entire school community.

In February 2010, PTA leaders at Stony Lane Elementary in Paramus, N.J., hosted one of their best family events ever—a huge “Get Connected” block party. Surprisingly, though, this block party wasn’t held outdoors and didn’t have the flashy fanfare of giant inflatables, loud music, or a DJ. Instead, entertainment for the 150 attendees came by way of some 25,000 Lego brick blocks that the PTA provided for the night. The gathering provided fun and imaginative play for kids of all ages; it was also a snap for PTA leaders to put together.

“A lot of times it’s stressful to plan these events....Usually, we parents are running around,” says former PTA board member Wendy Worden. But at the Get Connected gathering, she says, “We were able to relax.” There was no formal committee established to plan the event. To gather supplies, PTA president Lisa Mandara had little to do but push an industrial cart full of Legos through a checkout register; a second volunteer was tasked with purchasing snacks.

According to Worden, the idea for the block party came about when she and the Stony Lane principal at the time, Angelo Casillo, were discussing ideas for Take Your Family to School Week. The two talked about ways to get parents engaged and connected at school, and they figured Legos provided the perfect theme. Through a National PTA program, the group was able to secure a grant for nearly $2,000, which covered the cost of the blocks and refreshments for the night. Leaders advertised the event by sending home flyers in students’ backpacks.

On the night of the event, PTA members welcomed attendees with handouts that included several project ideas for families from the Lego website (although participants were free to design whatever masterpieces they wanted). Some families played “Tell a Story”; explains Mandara, “One member of the family built something, and the other members had to tell a story about it without consulting with the builder.” Others had fun with “20 Questions,” in which participants took guesses to identify a finished design, guided along by the builder’s yes-or-no responses. PTA leaders also raffled off a variety of prizes that were left over from earlier events.

While the night offered plenty of opportunities to socialize with friends, for the most part children opted to sit down and engage in table play. Most surprising, says Mandara, who attended with her two sons, “They actually sat down with their families.” Mandara’s older son, Joey, then a 1st grader, built a man wearing “hover boots.”

A few “older kids” were on the blocks, too; Worden’s dad came along to spend some quality time with his grandson, Christopher, a kindergartner. “The two sat together,” she says, “and my dad made a Christmas tree.”

Setting up roadblocks: Event planner Wendy Worden says her PTA carefully arranged tables of blocks at various intervals in the middle of the gym, which used up a lot of would-be running space for kids. The strategy helped leaders keep a calm atmosphere during the evening. One cost-saving suggestion from Worden to PTOs looking to host their own Get Connected event: Ask parents to supply/donate their own blocks from home for the night.

Wireless disconnection zone: At the Stony Lane event, families found it easy to power off digital distractions such as Game Boys, iPods, and iPhones and turn on their imaginations instead. PTA president Lisa Mandara says she has received lots of positive feedback from families who appreciated being able to sit down and build all night long. Additionally, Worden says, “Many of the families who had been at Stony Lane in prior years appreciated the community aspect of the evening.”

Building skills: After the event, PTA leaders donated the assortment of Legos to the school’s classrooms. Worden says teachers now incorporate the blocks when teaching math or fine motor skills to students.

# Shari and family 2011-01-15 04:00
This sounds like a great idea. Our group is very small and it would be a challenge to raise the funds needed to supply the blocks. I still like the idea!
Refresh comments list
RSS feed for comments to this post