New Group: Doing It Right From the Start 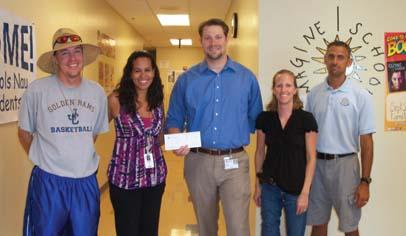 PTO Today's 2011 Outstanding New Parent Group made education and community its primary goals, following the lead of the family the school was named for.

The novice PTO officers who signed on to help a brand-new Florida charter school quickly admitted they had no idea what they were doing. But in the two years that the Imagine Schools-Nau Campus has been open, those officers have built a vibrant parent group known for its fun family events and community service.

The 690-student, K-9 school in Port Saint Lucie was named for the Naus, a family of Cambodian refugees who previously owned the property. Because education and community meant so much to the Nau family, the PTO knew that should be their focus, as well. The PTO’s efforts to serve the school and to make a difference in the wider community earned it recognition in PTO Today’s 2011 Parent Group of the Year search as Outstanding New Group.

Because everyone was new to the school, the PTO planned plenty of events where families could get to know each other better. Several McDonald’s McTeacher’s Nights were well-attended by the students, parents, and faculty. Teachers worked behind the counter at the fast food restaurant, and a portion of sales was donated to the school.

One of the PTO’s largest events, a dance for K-2 students, turned out to be popular with both students and parents. The dance had a fairy tale theme. Princesses could get their nails painted and buy headbands and barrettes to complete their ensembles. Goatees were painted on the princes. Students made their own crowns, swords, and shields, and posed for photos with their costumes complete. A DJ provided music for dancing. One of the parents even built a castle that the children could crawl around in.

Half of the $1 admission fee went to the school’s technology fund and the other half was raffled off to one attendee at the end of the evening.

The social functions gave busy parents the opportunity to talk with other parents and form new friendships. “The fact that so many more of us can call each other by name now and that we’ve made memories to share speaks volumes,” says PTO president Judy Vicari.

Helping the community with some of its needs made perfect sense to the Nau Campus PTO. They hosted an Earth Day celebration with the theme “Weed Our Campus, Feed Our Community.” While parents gardened, their children played in a bounce house, made crafts, and planted their own flowers. Although the weeding was designed to clean up the school campus, the PTO also collected shoes for the charity Soles4Souls and nonperishable food for local food banks.

The PTO helped raise awareness of several rare diseases, including Sturge-Weber syndrome. A family at the school had a child born with Sturge-Weber syndrome last year. Students were allowed to wear green shirts instead of uniform shirts if they paid $1 on Rare Disease Day. Italian ices also sold for $1. Other families shared how rare diseases had affected their lives, and those stories were posted on a bul-letin board at the entrance to the school. The money raised was donated to the Sturge-Weber Foundation and the National Organization for Rare Disorders.

Parents also helped raise money for a team of teachers who participated in a walk to support breast cancer research. At a fall festival at a local church, parent volunteers sold baked items and crafts and ran a booth where attendees could deco-rate cookies for a fee. In addition to supporting a cause important to several teachers, the parents were able to spread the word about their new school to people at the festival.

Although the PTO organized fundraisers for groups outside the school, it also worked hard to purchase equipment for the school and to support teachers and staff. In its second year, the PTO supported a new media center with both money and manpower and raised funds for a large purchase of some much-needed technology equipment. It also donated educational software, PE equipment, art supplies, cleaning and classroom supplies, and awards.

Appreciation for teachers and faculty took many forms and lasted throughout the school year instead of for just one week. From tiny pumpkins with an appropriate thank-you tag to cans of chicken soup to keep the teachers healthy, each month brought a new and different treat for teachers. In May, the PTO went all out and did something each day for Teacher Appreciation Week, including offering staff members lattes, breakfast, desserts, and lunch.

In just two years, the PTO established a strong organization and acquired the tax-exempt 501(c)(3) designation.

In addition to supporting the school, it has helped school families connect with one another. “Our primary goal this year was to focus on the community. Not only have we done that, we have also become a community,” Vicari says. “In the years ahead, we hope to increase our numbers and get even more people involved in this community we have created.”