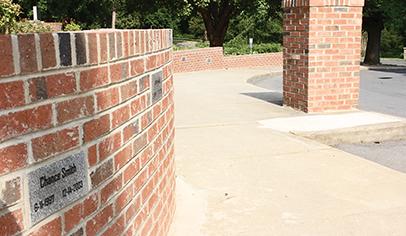 An amazing discovery led to an equally amazing memorial, earning the award for Outstanding Job on a Completed Major Project in the 2012 Parent Group of the Year search.

The death of a student is the most tragic, emotional experience a school community can endure. But these students remain loved and remembered by their families, teachers, and neighbors long after they are gone.

The PTO of Stanfield (N.C.) Elementary recently completed a remarkable memorial to honor students who died before graduating from high school. It has earned Stanfield the award for Outstanding Job on a Completed Major Project in PTO Today’s 2012 Parent Group of the Year search—as well as the gratitude of families struggling to cope with the loss of a child.

The project began quite simply. The rural 382-student, K-6 elementary school didn’t have a mailbox. PTO president Lori Furr asked her husband, a brick mason, to build one so staff members would not have to go to the post office each day.

When the Furrs combed through a stash of bricks stored at the school, they made an amazing discovery: six memorial stones, inscribed with the names and dates of birth and death of former Stanfield students. The oldest of the stones dated back to the 1980s.

“These stones apparently had been bought but had never found a permanent home at the school,” Furr explains.

The PTO decided that these stones needed to be put in a memorial at the school. They also did some research and discovered that since the time the original stones were carved, eight other students had died before reaching high school graduation. So the PTO commissioned stones for those children, bringing the total to 14. PTO members also contacted the families of each student to make sure they were comfortable with the inclusion of their loved one. All 14 were not only willing, but appreciative.

The wall serves a practical purpose, as it keeps landscaped mulch from washing down a hill. But more significantly, it serves as a testament to how important it was to the PTO and school community to honor these students.

“It took a lot of community effort,” says Michelle Dowdy, PTO secretary. “We put the word out to parents, staff, and the local community. People handed over cash and materials to build the wall.” The PTO raised $2,000 for the project, not counting the value of donated materials. Parents at the school completed all of the labor.

The Stanfield Elementary Wall of Angels was unveiled at a December 2011 ceremony. Families of the students were invited, with one even traveling from Pennsylvania. Current students held photos of the departed students, and a former teacher and principal shared their memories of each child.

“It was emotional, but it also was a happy time. The families were rejoicing that their child had not been forgotten,” Furr says.

What the judges loved: The PTO took what could have been a basic construction project and found a way to make it meaningful for the school community by building a wall to honor deceased students.

Cool fact: Rain fell the morning of dedication ceremony. But by the time of the event itself, the rain had stopped and the sun broke through the clouds.