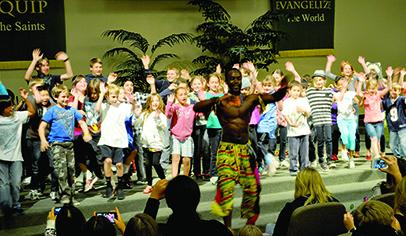 PTO Today's 2012 Parent Group of the Year for Outstanding Family Event winner created an African-theme event that tapped into an interest in the continent that planners didn't know existed.

When Parents in Education, the parent group at Pleasant Valley Christian School in Camarillo, Calif., chose Safari Night as the theme for its annual science night, they tapped into a schoolwide passion for Africa they didn’t realize existed.

As a result, students learned what a typical African classroom looks like, how animal tracking helps protect endangered species, and that some types of bugs are not just edible—they taste pretty good.

Safari Night is PTO Today’s 2012 Parent Group of the Year winner for Outstanding Family Event. The event went far beyond science education. “There was a science, cultural, and missionary aspect to the program,” says Amy Borgman, PIE secretary.

Borgman was inspired by a family vacation at Walt Disney World to propose an African-theme event. She saw how much her kids enjoyed participating in activities at the Animal Kingdom Lodge. For each activity her children completed, they received a bead. Her kids were so excited about earning beads, in fact, that they didn’t want to go to the theme park.

For Pleasant Valley’s Safari Night, volunteers adapted the bead idea. Students collected beads at each learning station, then strung the beads on twine to make a keepsake bracelet.

With just 240 students in grades K-8 at the school, the parent group needed a lot of volunteers to pull off the event. Fortunately, many of the school’s families had personal connections to Africa.

“Africa is near and dear to so many of our families,” Borgman says. “Whether it was because of ancestry, mission trips, vacations, or just interest in the area, we had parents who had never been involved in PIE projects asking to participate.”

During a planning meeting, organizers came up with 10-plus learning stations with interesting activities for kids of all ages that would reflect Africa’s diversity. The goal for each station was authenticity, which the group achieved through research as well as by drawing from personal experiences.

Students rotated stations every 15 minutes. Instructors imparted lessons with passion, and that energized parents and children to want to learn more.

In one classroom, a former missionary replicated a classroom in Africa by setting up a makeshift blackboard and long benches for children to sit on. Then he talked about his experiences teaching in Africa and overcoming the language barrier.

At a second station, kids had henna designs painted on their arms to represent the many types
of body art found throughout Africa. And at yet another, students rolled out dough with soda bottles to demonstrate how innovative people can be when faced with limited resources.

The most popular station gave students the opportunity to eat bugs. “Ants and crickets were a favorite delicacy that evening,” Borgman says. The station volunteer feared a potential gross-out factor, but research revealed that 80 percent of the world’s population enjoys eating bugs. “We’re the weird ones, not them,” Borgman says, adding that most kids were game to taste the insects.

Students also loved learning about animal tracking. They headed outside with helmets, flashlights, and GPS trackers with the coordinates of where to find their “endangered” stuffed animal. The darker it got, the harder kids had to work to find the animals. As part of the learning station, students discussed why it’s important to protect endangered species.

After an hour and a half of traveling through stations, the event shifted into the chapel where a troupe of African dancers and musicians entertained the crowd. Some parents and students went on stage and learned a dance that told a story. “Everyone left the dance assembly in a happy, joyful mood that helped cement friendships and relationships in a very short time,” Borgman says. “The ability to sneak in learning while our children and families were having such a blast was our greatest achievement.”

Overall, organizers were thrilled that the event turned out to be so much fun and so educational. Expenses amounted to $1,338, which they were able to cover without much trouble, and the influx of new volunteers made the preparation process easy.

The initial brainstorming meeting took only an hour. The second meeting focused on assigning stations. And at the third meeting, volunteers ran through their presentations. “Everyone knew what they were supposed to do,” Borgman says. “We were off and running for the night.”

Jaime Mitchell, PIE president, helped a parent set up his station with photos and artifacts from his travels to Africa. She was amazed at how rapt attendees were at the presentation, which hit on different points for each group of students.

“This was one of my favorite events we have experienced since we have been at this school,” Mitchell says, adding that her daughter still wears the bracelet she made. “It’s great to have something tangible at the end of the night, something they can keep to remember such a wonderful event.”

Creating a single event for little kids, tweens, and young teens can be a challenge. At Pleasant Valley Christian School, the safari theme proved ideal for engaging kids in kindergarten all the way through grade 8.

• The appropriate age group for each activity was posted on the door.

• Younger children were given simple hands-on activities they could do without getting frustrated. They made their own drums out of empty containers as well as animals out of pipe cleaners.

• Some activities had a cool factor that attracted older kids, such as bug eating and henna designs.

• Every station had something for younger kids. For example, in one game called “The Sounds of Africa,” a sound was played and participants had to guess what it was. The rules were simple enough for small children, but the game was also challenging for older kids.