National Winner: Service to the School and Beyond 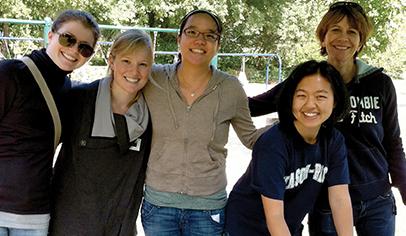 The 2012 National Parent Group of the Year has the people, the enthusiasm, and the organization to excel in many areas—in the school and elsewhere.

At Mason-Rice Elementary in Newton, Mass., the PTO’s ability to mobilize students and parents has led to a dizzying roster of remarkable accomplishments.

The numbers alone are staggering. The PTO managed more than 50 committees that involved some 150 parent volunteers and 50 faculty members at the 437-student K-5 school. And these teams worked hard.

The year started with a playground community build, where more than 300 people installed a new playground. An array of academic and enrichment activities followed. Those 25 school programs ranged from a kindergarten welcome program to a science week and child assault prevention workshops. More than 100 students shared their talents at a series of “Musical Mornings.” A World Cultures Festival showcased dozens of countries through exhibits, performances, and an international feast. And the list goes on.

The Mason-Rice PTO was selected as PTO Today’s 2012 National Parent Group of the Year because it has the people, the enthusiasm, and the organization to excel in so many areas.

Beyond the School Building

Most notable of all is the group’s commitment to social action and environmentalism. “Our mission has been not just to get our children and ourselves involved but to get us involved in impacting the world locally and globally,” says Julia Hamilton, one of three PTO copresidents. In the 2011-12 school year, those longtime efforts were expanded and unified under two umbrellas: a Social Action Committee and a Green Team.

The hallmark of the social action efforts is a program called Kids Take Action, now in its sixth year. More than 40 children signed up last year, and with adult guidance, selected three areas for the year’s focus: hunger, endangered animals, and green initiatives. “[Children are] able to relate better to the concepts of volunteerism and philanthropy and helping the environment by doing hands-on activities,” Hamilton says. The program also allowed children to work on leadership skills. They learned how to brainstorm, work in teams, and talk to others to encourage positive behavior.

One of their activities was a catalog-canceling challenge that resulted in the cancellation of more than 1,900 catalogs, saving at least five trees. “They could see the impact of something as small as canceling the catalogs you didn’t want,” Hamilton says. Coin drives raised money for a Kenyan girls’ school and for wildlife conservation. A food drive netted more than 60 big bags of food, which the children brought to a local pantry. They also volunteered at a farm that donates its entire harvest of vegetables and fruit to homeless shelters and food pantries.

At year’s end, the kids performed skits that were filmed and shown on a local TV station and at a citywide environmental leadership awards program. These performances, also written by the students, illustrated how they have learned about the inter-related effect of human actions on the environment. For instance, one skit discussed how smoking is bad for people’s health, creates litter when butts are thrown on the ground, and can harm animals that ingest discarded cigarettes.

Beyond the Kids Take Action program, many of the PTO’s family activities revolve around service, with an emphasis that giving one’s time is as valuable as a monetary donation. Among these events was the Gift of Giving program, with families collecting gifts for more than 120 children who live in a large public housing development in nearby Boston or who had been affected by domestic violence. In another project, volunteers created goody bags with donated party favors, which were donated to an organization that provides birthday celebrations for homeless children.

In other efforts, thousands of pieces of Halloween candy were donated to the military, and more than three carloads of clothing were taken to a nonprofit that provides assistance to needy children. And the school community joined principal Mark Springer, a cancer survivor, in the American Cancer Society’s Relay For Life in Newton and also held a school soccer game that involved more than 100 staff and students and raised some $1,500 for cancer research.

“Our community had seen the principal go through cancer treatments, so that was a focal point to rally around,” says PTO copresident May Chiu. “We want children to know you can make a difference.”

Another key PTO focus is environmentalism, and the parent-led Green Team has made a real difference in the school. The group found ways to reduce the amount of waste at hospitality events, such as using only napkins for finger foods and eliminating bottled water by reminding people to bring their own bottles. (The PTO supplies a large water-filled cooler for refills.) But the most significant change was a commitment to composting.

The Green Team received two local grants to add a composting bin as well as to make improvements to the school garden, including adding an elevated garden bed for disabled students and installing an enclosed bulletin board for communication of garden activities. Starting this fall, students in 4th and 5th grades will take classroom buckets filled with compostable material out to the bin. In the spring, soil from the compost will be put into the garden when seedlings are planted to help give children a sense of the cycle of renewal.

What’s more, volunteers brought compost-able materials like food scraps and paper plates from large school events to the local Whole Foods supermarket, which has donated space in its composting dumpster for the past several years. The waste was then composted at a commercial facility.

“We try to do things in ways that make sense to children and are not overwhelming,” Springer says. “It makes sense for kids that you don’t want to be filling the world with trash and that you need to recycle, that they can take their products and put them in the compost bin. They can see and feel it. It’s part of their world.”

Another Green Team effort targeted the safety and expense of cleaning supplies. In the past, parents had been asked to send in hand sanitizer, paper towels, wipes, tissues, and hand soap at a total estimated expense of $3,000 per year. In addition to the cost, parents were worried that not all of the products were environmentally friendly, a particular concern since children were the main ones using them. Other problems were that soap dispensers were hung too high for children to reach and that the paper towels used weren’t very absorbent.

After meeting with janitors, the principal, and the chief of operations who ordered supplies, the Green Team successfully lobbied for significant changes. The soap dispensers were moved to child level. Paper products with organic and recycled materials were ordered, and because they worked better, there was less need for sprays and wipes. And most of the supplies are now provided by the school district rather than by parent donations.

The Green Team also worked to reduce waste related to school supplies, such as using more recycled paper and having supplies shipped in bulk to each class rather than individually packaged per student. The group also presented ideas about finding more environmentally friendly alternatives to glue sticks and markers. “We hope to press every year to increase these items,” says PTO copresident Sunwoo Kahng.

The Mason-Rice PTO has accomplished a lot, but they started small. “These projects really developed over the years,” Hamilton says. “They started on a much smaller scale. Every year we would make changes and improvements and add efforts. You don’t have to start with a grand approach.” Even more important than scope is passion. “This is parent-driven,” she says. “You just need initiatives that somebody or a group cares about and let them run with it. They don’t have to address the world or every issue they care about. Just pick one. If they’re excited, it will be more fun and will get more people involved to make it happen.”

These tips from the Mason-Rice PTO can help your group build support for new projects.

Find a cause that students can relate to. “My advice for other PTOs is to find something close to home that the kids, through classroom and discussions, can embrace,” says PTO copresident May Chiu. “If kids are involved and understand, parents will jump right in.”

Plan group projects. Kids love hands-on activities, and parents will be drawn to tasks they can complete with their kids. These types of activities are especially effective at involving parents who don’t speak English. “To help another group of people, it doesn’t matter what language you speak,” Chiu says. “People want to participate in a way that makes them feel part of the community. That’s a big draw.”

Tout your accomplishments. This is especially important for environmental projects that may ask people to change their behavior. People will be more likely to get on board with environmental efforts if they see that it makes a real difference. The Green Team made sure everyone knew that they had reduced trash at school events by a whopping 70 percent. “From a waste perspective, it made a big impact,” Chiu says.

National Parent Group of the Year: a $3,000 check for the group.

Judges’ Choice and category winners: a $500 check for the group.

We received many strong entries, and the judging was extremely difficult. In addition to the winners profiled here, the judges also chose many groups for honorable mention. For a complete list of honorable mentions, visit ptotoday.com/pgy.

We’ll be announcing the details of the 2013 Parent Group of the Year search shortly. The new search covers the 2012-13 school year. We will be sharing more information online at ptotoday.com/pgy and in the October issue of PTO Today magazine.