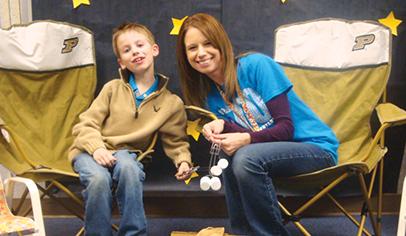 Beat the blahs with these winter theme ideas that are sure to bring families together.

Winter is a great time for family events at school. As the temperature drops, there are fewer outdoor sporting events to schedule around. At the same time, families with cabin fever are looking for fun and inexpensive activities they can do together—while staying warm, of course.

Winter events don’t need to be complicated. A chili cook-off or bingo night might be a big draw in your community. An open gym night where families can shoot hoops might attract parents new to the PTO. We talked with parent group leaders from across the country about what makes their winter events special. Although their winter event ideas were very different, they all put the focus on fun—and as a result, plenty of families braved the cold to be there.

The theme varies, as does the month, but great attendance is a constant at the PTO’s Winter Wonderland Family Reading Night at White Oak Elementary in Avon, Ind. Up to 400 students and their families show up for this free evening activity.

One year, the theme will be Dr. Seuss’ birthday. And another year's focus was on camping. Teachers set up in their classrooms to read and act out camping-related stories, such as Amelia Bedelia Goes Camping and Have You Ever Seen a Moose Taking a Bath? Children gathered around an electronic campfire donated by a parent and ate s’mores. They also posed for photos with their friends, poking their heads out of a tent or pretending to roast marshmallows, and took home prints in paper frames. Each student left with a book the PTO had purchased from Scholastic’s dollar specials. They also received a paper that said “My Camping Story” and were invited to turn in their story the following week for the chance to win another book.

Creating a set agenda with a starting place and an ending place for the reading night helps keep things running smoothly. “If it’s free-flowing, people get a little lost in the shuffle,” says Stephanie Tartaglia, the PTO’s activities director. She also recommends having activities in classrooms in 15-minute blocks to avoid congestion in the hallways, the spot originally used for this occasion.

Winterfest, a January event at Naquag Elementary in Rutland, Mass., focuses on crafts. Moving from table to table, where they get a unique stamp on each of the Christmas tree cutouts worn around their necks, kids make picture frames, pinecone bird feeders, gingerbread men, scratch art, and more. Finished samples at each table serve as models. There are also games, prizes, and concessions.

Over the years, the event has been fine-tuned. It was originally held in December, which proved to be too crowded with other activities. Although many crafts have a holiday theme, the PTO found that January was a better time for the event.

At first, the PTO sold tickets for each activity. That slowed things down, so now a single entry fee is charged instead ($5 per child or $10 per family). And the crafts themselves are a continuing work in progress. Some projects that won’t be repeated include one that spread sand everywhere and crafts that took a lot of space to make. “I sit in my living room with my kids to try everything out,” says PTO president Megan Ryan.

One of the best changes was using volunteers from a local college. “That had never even occurred to us until a parent who works at the college suggested it,” Ryan says. “They were looking for a volunteer opportunity and did a great job with the kids. We just served them pizza, and they were happy.”

Since 2009, Country Meadows Elementary in Muskego, Wis., has held a winter pool party in January at the local high school. Attendance has grown from 40 to more than 100, a testament to the idea that a bit of summer fun can help beat the winter blahs. The party lasts two hours, and lifeguards (part of the fee to rent the pool) help ensure safety. There is a shallow area for the younger children and a deep area with a diving board for more adventurous swimmers. Families are invited to participate and can even bring inflatables.

One of the most popular aspects of the event is the group photo that is taken of each grade for the yearbook. Eventually, school alumni who attended the event asked whether they could have their photo snapped and included, as well. “We use a megaphone to call kids out of the pool for the group picture,” says Parent Advisory Council president Tracy Blair. “You can see how everyone changes over the years.”

At first, the PAC charged an entry fee of $1 per person. But to encourage attendance, that fee was removed. To cover the $200 rental cost, the PAC holds a bake sale at the winter concert the evening before the pool party. The baked goods left over from that sale are distributed to each child as he leaves the pool party.

Each year on the Friday before the Super Bowl, the Parent Council at Rossiter Elementary in Helena, Mont., hosts a Super Bowl Tailgate Party. Held inside, it’s really a game night timed so that families remember the date; up to 120 students plus their families have attended.

There are six major events, one per grade level, held in the school’s classrooms, library, and gym. One of the most popular events last year was a life-size Angry Birds game, with stuffed birds launched from a giant slingshot into cardboard boxes filled with stuffed pigs. Other games included floor hockey played with members of a local semipro hockey team, Wii sports and dancing, gymnastics, and an obstacle course. A local college football coach also attended along with some of his players.

Several students sold concessions. Fifth-graders sold ice cream treats to raise money for a school trip. As a community service project, a Rossiter student who is a Girl Scout sold hot dogs and tacos donated by an area bank to raise money for a local food charity. Attendees who brought food donations got their names entered in a drawing.

The first time, activities were held in every classroom, making for a hectic evening. As a result, the number of games has been scaled back further each year. “People felt scattered and rushed to get to everything before,” says Brenda Miller, a past chair of the parent group. “With just six events, we could make each one bigger.” She also suggests getting dads to call other dads to encourage their participation.

In 2012, the Parent Teacher Club at the James L. Collins Catholic School in Corsicana, Texas, premiered a mother-son basketball game in November and a father-daughter dance in January. Both were hits that launched new traditions.

The basketball event divided students into four age groups. Students in each division played for one 15-minute quarter against their moms. The boys wore blue T-shirts while the moms donned pink T-shirts (purchased ahead of time by the families). Many also wore crazy socks and some spray-painted their hair. A couple of dads in official uniforms served as referees. At one point some rehearsed Harlem Globetrotters-type goofiness erupted, with a mom yelling at a ref and the ref chasing her with a bucket, which eventually rained confetti on her and into the stands.

Since the emphasis was on fun, rules were not strictly observed. Referees lifted the little ones to help them make baskets, moms would throw balls to their sons, and few penalties were called on the students, especially the younger ones. Things did get rather competitive with the older boys, however.

Another father served as a DJ, playing music between quarters. During halftime, everybody went on the court and danced the Macarena and the chicken dance. Attendance was about 100.

The event expanded to include cheerleaders and more subbing of players rather than having everyone out on the court at once. “Some parents had more than one child, so they were pretty worn out,” says PTC president Lilly Schramko.

The father-daughter dance was also held in the gym. Mothers were dressed like waiters in black pants and white shirts and served punch and cookies. One of the most memorable parts of the evening was the limbo competition, where dads in suits got down on the floor to scoot under the pole.

At both events, the PTC sold photos. At the basketball game, participants posed with the school mascot; at the dance, dressed-up dads and daughters smiled for the camera. And for kids whose mom or dad could not attend, substitutes were found so that no one was left out.

Snowman Paint Night
Paint nights are easier to put together than you’d think, and kids love them. Round up some volunteers and supplies and see if your art teacher (or an artsy parent) can walk kids through a simple snowman painting, like the one held at Beechview Elementary in Farmington Hills, Mich. A mom who’s a painter facilitated the event, which drew some 80 student participants (parents supervised but didn’t do their own paintings). Organizers prepared by having everything set up at the table; kids got their canvases when they checked in shortly before the painting started. When they were done painting, they left their canvases and dropped their brushes into plastic coffee cans. Everyone enjoyed cookies while the paintings dried.

Turkey Bingo
Each November, the Lake Seneca Elementary PTA in Germantown, Md., hosts Turkey Bingo before Thanksgiving. Two turkey dinner baskets are raffled off and canned goods are collected to donate to a local charity. At times, players have used candy corn for bingo markers. At Northside Elementary in Middleton, Wis., Turkey Bingo winners are encouraged to gobble down the hallway to collect their prizes.

Snow Community Service Event
Snow doesn’t fall often in Alabama, so the chance to make a snow angel gets kids there really excited. Deer Valley Elementary in Hoover, Ala., brought in a snow machine for after-school fun in January, combining it with service. In between playing in the snow, children made scarves for the homeless and built snow globes to be donated to a local children’s hospital. The school calls the event S.N.O.W., or Serving the Needs of Others during Winter.

Originally posted in 2013 and updated regularly. Family Reading Night™ is a trademark of School Family Media®.