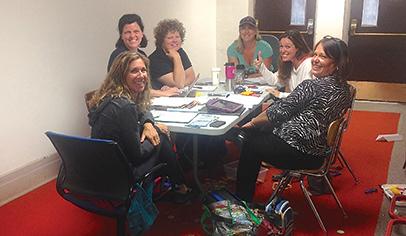 A flood devastated the town of Lyons, Colo., but PTO leaders at its elementary school kept going—earning the group the Judges' Choice award in the 2014 Parent Group of the Year search.

On the eve of the 2013-14 school year, the PTO leaders at Lyons (Colo.) Elementary felt confident that they had everything under control. They had board members with two and three years’ experience, a solid budget, well-established programs, and a supportive principal at the K-5, 350-student school. Their ducks were in a row—until a thousand-year flood swept through their town and threatened to wash away all their plans.

Days of record-breaking rainfall caused five dams to breach one September morning, resulting in widespread and severe flooding. As roads and bridges crumbled, the town of Lyons became isolated and its roughly 2,000 residents were left without power, water, sewer, or gas. More than 200 homes were badly damaged or completely destroyed and a state of emergency was declared. Despite all this, and with barely a hiccup, the Lyons PTO persevered. It managed to deliver on all its plans, and then some—which led to its selection as the Judges’ Choice winner in the 2014 Parent Group of the Year search.

The school building still stood, but FEMA and the town government commandeered it for their headquarters. The school district converted a former school into a temporary home for Lyons Elementary and the town’s middle and high schools.

The PTO board members struggled with compromised living conditions. Volunteer coordinator Becky Knapp and her family, for example, had to be airlifted out of their mountaintop home while four other members camped out in their houses without utilities for close to two months. “I think the first instinct for everyone when it happened was to take care of their own family and school came second. But after I evacuated, I thought to myself [that] school is the most important thing because it provides consistency for the kids. I thought it was incredibly important for their emotional health to keep school going,” Knapp says.

So the beleaguered group rallied to keep the PTO going. They managed the donations that were pouring in from all over. They applied for grants. They debated the fate of their annual fall fundraiser, a jogathon. Without it they would be in financial trouble, but how could they possibly ask Lyons families for money?

“We were all in agreement that we couldn’t ask for money,” Knapp says. The group decided to hold the jogathon anyway as a morale-boosting event. Meanwhile, they worked on figuring out a different way to raise funds. For the first time ever, the group used a crowdsourcing site, which brought in an amount just shy of $12,000. Such incredible outside support was heartening, but the PTO was stunned when Lyons families and community still came through with another $17,000—and boosted jogathon earnings to a record level.

In early December, Lyons Elementary returned to its original school site and the PTO resumed hosting events such as bingo night, a “discovery fair,” a talent show, family picnics, and the second and final fundraiser of the year, a springtime silent auction whose earnings, like the jogathon’s, surpassed all expectations.

A flood may have devastated Lyons, but a flood of goodwill soon followed. It was exemplified by these tight-knit volunteers who carried on despite serious challenges. “To have something like this happen to our school and then walk away just wasn’t an option. We weren’t going to let it beat us down,” says PTO president Cassi Rosekrans. “We regrouped and decided to fight back together, and we chose not to fail.”

Tips for Coping With Crisis

Strip down to basics. Brush aside minor concerns and focus only on what’s urgent, says volunteer coordinator Becky Knapp. Ask yourselves: What are the school’s most important needs? How do we meet them?

Ask for help. If it seems too much to ask your usual donors, reach out to the broader community through social media or partner with a corporation. Lyons did both with great success. Their partnership with Sam’s Club enabled them to donate more than $25,000 worth of goods to families in need.

Be honest about what you can take on. If personal circumstances prevent you from fulfilling your duties for a time, as Knapp’s airlift and relocation did, keep fellow PTO members in the loop.

Keep your eyes on the prize. In particularly trying times, it’s tempting to give up. “You’ve got to tough it out because ultimately it will benefit your children,” says PTO president Cassi Rosekrans. “It took a tremendous amount of effort to actually stick it through as a group. We could have walked away but we didn’t, and in the end we were able to look back and say ‘Wow! Look at all we accomplished.’”