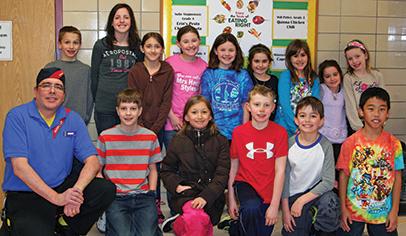 An annual recipe contest at a Minnesota elementary school gets students excited about trying new foods.

Getting children excited about healthy eating might sound like a tough task to some, but for the Concord Elementary PTO, it’s a breeze. The PTO’s wellness committee promotes healthy eating and living throughout the school year and holds a Young Chef Recipe Contest in spring—a favorite among students at the Edina, Minn., school.

Lori Post, a dietitian and PTO member who founded the committee during the 2011-12 school year, says Concord excelled academically but was lacking in nutrition education. She says the school’s principal and PTO were thrilled with the idea of adding a wellness committee. “The committee’s programs make wellness about fun, creativity, choices, and options,” explains PTO member Winnie Martin, who has a 4th and 5th grader at the school.

The committee holds Tuesday Tastings once a month, during which students can sample healthy recipes from school chef Robert Velarde, including kale chips, balsamic-glazed strawberries, and jicama sticks dipped in spinach guacamole. “It was very easy to get the kids interested in healthy eating,” Velarde says. “The kids got to know a real-life chef, and kids are more in contact with the food itself.”

The tastings grew into the annual Young Chef Recipe Contest during National Nutrition Month in March. Students are encouraged to submit healthy recipes to the wellness committee, which, along with Velarde, evaluates them based on healthy attributes, one or more servings of a fruit, vegetable, or whole grain, originality, and plate presentation.

Velarde says he tries to consider the price and commonality of ingredients so that students can easily make the winning recipes at home. The entries are also judged on their ability to be produced on a large scale, Post explains, because the winning recipes are featured on the lunch menu in March.

While Velarde is in charge of testing the recipes, the PTO heads up the promotion for the contest. Leaders post about the contest in the school’s weekly newsletter and hand out entry forms to students during Tuesday Tastings. The committee also asks teachers to help promote the contest in the classroom.

“The best promotion is in the lunchroom,” Post says. “With Tuesday Tastings, the students were already used to us coming and promoting the Wildcat Wellness Team.”

The committee gets the entry forms out before holiday break so that students can think about recipes while they’re at home. The deadline is in mid-January so that there is time to test all the entries and order ingredients to prepare the winning dishes.

With the help of the school’s food service provider, Velarde picks a winner and four runners-up. He prepares samples of the second- through fifth-place winners to offer throughout the week. The first-place recipe is featured as an entrée on Friday. Last year’s winners included quinoa chicken chili, caprese skewers, and pesto chicken pasta.

The winning students get excited to see their names on the menu, Velarde says. “The kids feed off of each other and it builds a lot of enthusiasm.”

And it helps to find fun ways to involve students in the process, Post advises, the way the recipe contest does: “The more involved kids are in learning, the more likely they are to try new things.