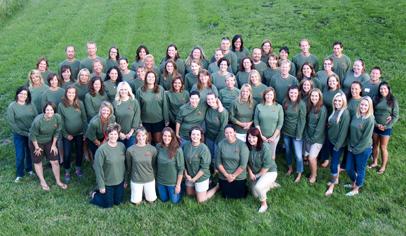 A businesslike approach builds this parent group’s volunteer base.

There’s strength in numbers, no doubt about it. But how a group harnesses its collective might is the true measure of its effectiveness. The Parent Teacher Involvement Committee at Roxborough (Colo.) Primary and Intermediate School has figured that out. This powerhouse group of more than 86 volunteers leading more than 40 committees not only manages to organize dozens of programs and events; it raises a significant amount of money, too.

And to think it was on the verge of folding just a decade ago. The PTIC was foundering when kindergarten parents Barbra Chase and Sean Burke stepped in with new energy and strong corporate backgrounds. The husband-wife team is credited with totally reinventing the PTIC, imbuing it with a strong business sense that lives on to this day even though they are no longer directly involved.

Now, academics and enrichment activities flourish throughout the grade levels thanks to the PTIC’s generous support. The group nurtures neighborhood connections with events that welcome the greater community. It sponsors philanthropic programs and hosts opportunities for families to relax and have fun. Roxborough PTIC is a big group with an even bigger heart, and as a result it has been selected as PTO Today’s 2015 National Parent Group of the Year.

The PTIC members call themselves memory­makers and fundraisers. They brought in more than $135,000 in the 2014-15 school year, but vice president Teri Vannoy likes to stress that it’s not all about the money. “We obviously raise a lot of funds, but we don’t want that to be the be-all and end-all of what we’re doing. It’s a critical part, but we really see our efforts as multipurpose. There’s a fine balance,” she says. So while energy is devoted to holding fundraising events—a golf tournament, a community auction, car washes, a fun run, and a few others—just as much energy, if not more, is directed toward enrichment activities and com­munity functions as well as philanthropic drives and memorymaking events.

The Secret to Their Success

So how exactly does Roxborough PTIC attract so many volunteers? Vannoy has her own theory: “I think what continues to happen is people see our success and they want to be a part of our success. And we’re willing to work with them to find a position that would be a good fit for them.”

Membership includes school staff as well as stay-at-home parents and those who work outside the home full- and part-time. And, as testament to the kind of passion the group inspires, the PTIC even has several volunteers from the community who don’t have children enrolled in the school.

It is true that success attracts success. Lining people up with tasks that match their skill sets makes good sense, too. Qualify that a bit by saying it makes good business sense, and you’ve stumbled onto the secret to Roxborough’s success. They run their PTIC like a business.

“Barb and Sean set it up where the executive team is like the board, and each committee chair is like a department head,” says president Niki Cannon. “They really did set it up like a business and it is a well-oiled machine. Full-time working parents, they respect that. It’s easy for them to fit into. Everything’s in place now and it’s easy to keep it going.”

One of the group’s top priorities is allocating funds for academics. About $127,000 of the PTIC’s budget goes toward teacher grants, including staff training, curriculum, online learning tools, academic enrichment, and science materials.

“Our work allows our principals to use 98 percent of their state-provided funds for teacher and staff salaries,” Vannoy says. This has virtually eliminated layoffs, plus it has facilitated having education assistants in the classroom as well as other specialists. It’s also instrumental in maintaining smaller class sizes. Students enjoy music, art, Spanish, technology, PE, and engineering as part of their everyday curriculum, and they have the PTIC to thank for it.

The PTIC is also behind a host of extracurricular activities. If kids like to run, there’s a club for that. Like to get their hands dirty? Garden club. Fond of robotics? There’s the Robo Rattlers. Those artistically inclined can Take Part in Art or participate in Theater Rox! All are programs organized and funded by the PTIC. Reading is heartily encouraged through activities like One School, One Book and the Junior Great Books program. The list goes on.

Playing the role of memorymaker adds some pressure, but the Roxborough PTIC doesn’t disappoint. Dads whirl their daughters around the dance floor during the PTIC-sponsored father-daughter dance while its counterpart, mother-son bowling, provides an altogether different bonding experience. Doughnuts with dads and muffins with moms events give kids and their parents more opportunities to interact. The whole family can take part in roller-skating nights, find their way out of the corn maze, enjoy a sundae during the ice cream social, scope out the winners at the science fair, watch or participate in the talent show, and more.

The community at large is frequently welcomed into the loop. The PTIC sponsors a community movie night before the start of the school year. The free event is held under the stars with lots of popcorn, camaraderie, and goodwill. Octoberfest is another wildly popular event that many families in the community attend as a safe alternative to trick-or-treating. There are also family fun nights where the community is invited to play bingo.

Family fun nights are organized by the BAM BAM (Be a Mentor, Be a Man) committee, which was created to appeal to dads. “It’s intended to be a situation where men can feel comfortable working with other men to do something special for the school,” Cannon says. The BAM BAM committee also organizes the August car wash fundraiser and muffins with moms, and it sells concessions at the talent show and ice cream social. Committee members also run a Watch D.O.G.S. program through which they’re an extra set of eyes and ears on campus.

In addition to the activities it organizes and the programs it funds, the Roxborough PTIC is the driving force behind several philanthropic efforts, including fall and spring food drives, a book drive, and a penny collection effort that is student-led but guided by the PTIC. Through the Young Philanthropists Foundation Penny Harvest program, students collect coins, research charitable organizations, and vote on where to donate the funds.

A strong business sense may inform Roxborough PTIC, but it’s passion that keeps it going. “Everyone can get involved. If somebody’s passionate and they work full time, there’s a spot for them. If they’re passionate and they stay at home, there’s a spot for them. The membership is very diverse,” says Roxborough Primary principal Rick Kendall. “We in administration completely trust them, and they completely trust us. And we’re working together to make Roxborough the best place it can be.”

Leave a paper trail. Keep a history of what’s worked and what hasn’t worked on committees. For big events, draw up a checklist, a timeline, and job descriptions. “That way, you won’t have to reinvent the wheel each time, you can just keep the machine going,” says president Niki Cannon.

Be your own HR department. Make a document describing all of your open positions and note which ones might be perfect for stay-at-home, part-time, or full-time working parents. Break it down to skill sets, too. “Potential volunteers should be able to glance at it and determine quickly if a position listed might be right for them,” Cannon says.

Stay alert for potential recruits. You’re likely to come across promising volunteers in places other than the sign-up table. “Work with an individual to identify their passion and then help them find a way to make it work within their realities,” says vice president Teri Vannoy.

Provide positive feedback. “If you’ve asked someone to volunteer and it’s their first time ever doing so,...if you don’t greet them or say thank you for being here, chances are they might not do it again,” Vannoy says.