Tips and Ideas for Food-Related Events 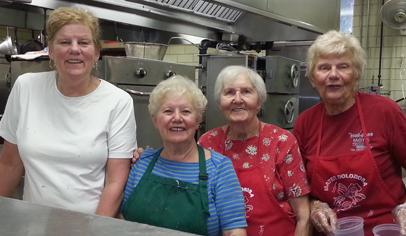 Parent group leaders share tips to make your next community meal or other food-centered event easier.

Community meals and other food-centered events can really bring together a school community—and sometimes they can be productive fundraisers for a PTO, as well. But before tackling that pancake breakfast or potluck dinner, it’s important to have a thorough plan in place for what to buy and how to serve it.

We asked PTO leaders who run time-tested events to share their practical tips on providing food to large groups.

Potluck dinners are popular events at many schools. Part of the appeal for parent group leaders is letting other people do the cooking; however, a potluck dinner still requires some advance planning.

At Stoddert Elementary in Washington, D.C., the PTO welcomes back students and parents with an annual Potluck + Pizza Picnic. The event has been a big success, as around 300 families attend each year.

The PTO supplies pizza and water; families are asked to bring a side dish from home. To make sure there’s enough of everything to go around, families are asked to bring a particular type of item by last name. For example, those whose last names begin with A-H might bring fruit, while I-P names contribute salads or side dishes and Q-Z ones bring desserts. Foods with allergens (wheat, soy, dairy, etc.) are labeled as such if it isn’t readily apparent.

In addition to food, organizers have to be sure to have enough plates, napkins, utensils, and drinks on hand, says copresident Maria O’Donnell.

“Another large part is the advertising of the event well in advance so families can plan,” O’Donnell says. The potluck is promoted on the school website and in the packet of back-to-school information sent home in early August. The PTO also promotes the potluck in its weekly e-newsletter.

On the day of the potluck, about 15 to 20 volun­teers help with the event, from setting it up to breaking it down.

The Stoddert Potluck + Pizza Picnic also features games, such as cornhole; O’Donnell says the goal is to make it a fun social event where families get to know one another. Such an event also can be a great opportunity to promote diversity and let students experience their classmates’ cultures.

“Stoddert’s school community is incredibly diverse, with over 30 countries represented,” she says. “So we usually have a very rich and wide array of amazing home-cooked meals where students can try many different and authentic dishes.”

The PTO hosts a spaghetti supper every month during the school year—10 in all. Despite having only 240 students, the Mater Dolorosa PTO routinely draws 350 to 400 patrons for each of these dinners.

Lisa Balicki is the PTO president and is actively involved in running the spaghetti suppers. She says when they started holding the events, the PTO sought advice from a church group that had planned previous events.

“We were fortunate we had a little help,” Balicki says. “But we still had to play around with it a little.”

The Mater Dolorosa spaghetti suppers take place at a social center. Twice a year, representatives from the local health board come out for an inspection. Balicki says PTO volunteers need to be aware of health codes and make sure they are following all guidelines when they prepare meals.

Also, the PTO offers beer and wine with the pasta, salad, and bread. So the PTO has to secure the proper permits from the local alcoholic beverage control office, just like a restaurant.

Balicki’s team knew it needed those permits going in. But she says they have encountered, and dealt with, unexpected challenges.

“You need to have the right cash flow on hand for changemaking,” she says. Customers pay at the door for a standard meal, but if they want to add a glass of wine or a dessert, they pay for those a la carte at the respective stations. “You have to make sure all of those stations have enough cash to make change,” she says.

Another challenge is the fluctuation of food prices and other supplies, Balicki says. These month-to-month changes can affect how successful a fundraiser will be.

Also, equipment check-ups before the event are critical. “You don’t want your ovens going down in the middle of a meal,” she says.

For the upcoming school year, the PTO is exploring deliveries to two nearby senior residential communities. Balicki says the senior citizens are some of their most loyal customers, but they don’t like to venture out during the dark, icy winter months.

The spaghetti suppers have been a big success for the PTO and Mater Dolorosa. So far this school year, the PTO has been able to put nearly $9,000 into new technology and $3,000 into books using proceeds from the suppers. The PTO also is providing money for classroom activities, such as performing arts for middle school students.

“We’re a small school, but we’re able to do some big stuff,” Balicki says.

In Hudson, Ohio, the school pancake breakfast is a community tradition. The 58th annual Hudson PTO Pancake Breakfast held in March 2015 drew a whopping crowd of nearly 2,300 people and raised $21,000 for school needs.

PTO member Jennifer Fisher helps organize the pancake breakfast. For an event this size, it’s important to recruit parent and student volunteers beyond just the core PTO membership, she says. “We need more than 300 people to staff this event, and every year we get the volunteers we need,” she says. Volunteer positions include committee heads, advance prep, serving food and drink, cleaning and resetting tables, and tearing everything down at the end of the day.

The Hudson PTO also casts a wide net for supplies and has found that local businesses are willing to help. “In turn, we publicize their involvement with the breakfast in advance through a variety of marketing and publicity items,” Fisher says.

With decades of experience, the Hudson PTO has learned a lot about organizing such a big meal. Tip number one: If you’re serving breakfast, you’ll need a lot more coffee than you think. Fisher offers these additional tips, which could apply to any type of meal:

Parent volunteers frequently staff concession stands during athletic events, school plays, and other events, and for PTOs, concession stand revenue can be a nice moneymaker.

The Baldwin Elementary PTO in Manassas, Va., holds a big outdoor movie night every May at a local museum within walking distance of the school. The event attracts a crowd of around 500 people. Selling refreshments is a major component of the evening, and it’s up to PTO volunteers to make sure everything runs smoothly.

The concession stand doesn’t have cooking equipment, and PTO members decided it would be too difficult to try to prepare food off-site. So they serve prepackaged foods that are ready to go: chips, sodas, bottled water, and candy, all purchased at a warehouse store like Costco or Sam’s Club. They do pop and serve popcorn on-site, but that is the only food that requires any preparation.

“We try to keep it as simple as we can,” says PTO copresident Kym Nguyen. The PTO also buys pizzas at a discount from a local restaurant and sells them either by the slice or as a whole pie. “We know a lot of parents might need dinner, and that’s why we started offering pizza,” she says.

For a crowd of 500, they start with 40 pizzas and order 40 more to have hot pizza throughout the night. They also need around five or six cases of candy, with 40 packs per case. Volunteers pop around 600 bags of popcorn. Much of it is prepared the afternoon before the event, so that the lines don’t get backed up with people waiting for it to pop.

Staffing is another important consideration in running a concession stand.

“We try to have three or four cashiers. We need at least one to be bilingual in English and Spanish,” Nguyen says. In addition, three or four runners collect food orders and bring them to the counter. That way, the cashiers can focus strictly on taking orders and making change—they don’t have to worry about filling orders. For sanitation purposes, two people are tasked with handling pizza and nothing else.

Adequate staffing and a limited menu of easy-to-serve items help keep the lines moving. “It’s not fun when parents have to stand and wait,” Nguyen says. It’s important to keep records of what the group bought, what it paid, and how much it sold, she says. That information can help determine purchasing for future events. The Baldwin PTO tries to purchase items with a long shelf life so that any unsold snacks can be offered at future events.

But not everything works according to plan, which is why Nguyen says trial and error are excellent teaching tools. One year the group sold wrapped candies, and many of the wrappers were left on the ground. Volunteers ended up using a flashlight to search the lawn for the trash. “That’s a lot of Starburst wrappers to clean up at 10 p.m.!” she says. 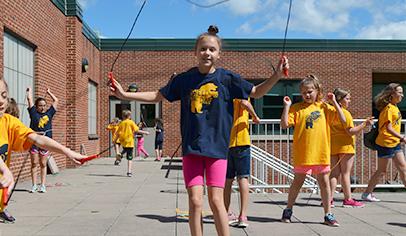