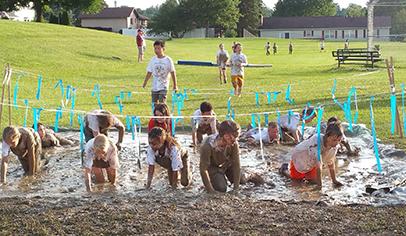 Create excitement for your activities by focusing on fun.

Looking for ideas to breathe new life into your school’s calendar of events? Whether the occasion is intended to boost school spirit, provide opportunities for family interaction, promote fitness and learning, maybe even raise some funds—you can’t go wrong when you appeal to a child’s sense of fun. And there are lots of inventive ways to do just that.

The Messier, the Better 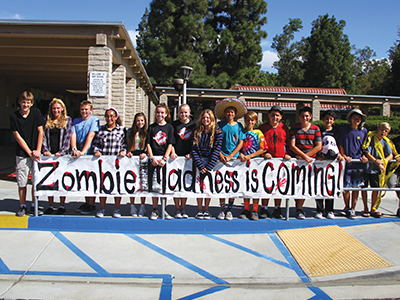 The annual obstacle course event at Gardner Road Elementary in Horseheads, N.Y., is always a source of good, messy fun. The Mini Mud Run starts out innocently enough with eight to 10 obstacles set up by an event coordinator and the school’s gym teacher. There’s a section of tires to run through, for example, and some of the playground equipment gets used. It culminates with an unpaved area sprayed down with water and crisscrossed with waist-high string decorated with streamers. Students have little choice but to get down on their knees and crawl through the mud—an activity most have very few reservations about doing! The goal is for kids to run three circuits around the course, earning a bracelet for each round and a medal at the end. The PTO charges a $5 registration fee, for which participants receive a T-shirt, water bottle, and snack.

If mud isn’t your thing, give your obstacle course a theme. La Paz Intermediate School in Mission Viejo, Calif., holds an annual Zombie Madness event that’s been a huge hit with students. Teachers head up ghoulishly named teams of students, and everyone sets out to conquer what is essentially a zombie-theme obstacle course. Wearing zombie-inspired outfits, teams muster their way through stations that have inventive names and challenges like Undead Hurdles, Infection Alley, Doom Step Course, and Survivor Dodge Ball. 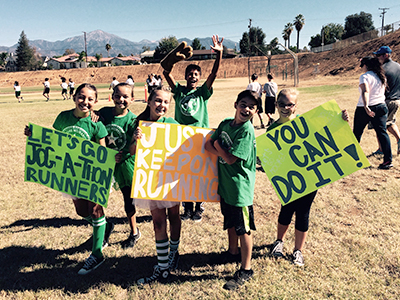 Events that get kids moving can be both exhila­rating and healthful. That’s part of what makes jogathons, color runs, and even carnivals so popular. Kids really look forward to the annual jogathon at Moore Middle School in Redlands, Calif., a team-based running event that has become the PTSA’s largest fundraiser. While kids do enjoy the healthful part—the running—the group freely admits that a special incentive has helped make it so popular: The group brings in a catering truck from In-N-Out Burger, a popular West Coast restaurant chain. When the truck arrives, “You’d think the Beatles themselves have driven onto the PE field because the kids are screaming so loudly!” says PTSA president Laura Echols-Mapes.

Skate night and a jump rope marathon are fun ideas to get kids active. Basketball appeals to students, as well. The Colonia (N.J.) Middle School PTO holds an annual student-faculty basketball game that gets the whole school excited. The Colonia PTO has also organized a schoolwide basketball tournament where each team was designated either blue or gold, the school colors. Games lasted 10 minutes each, and the winner was determined by which side had the most points at the end of the night. About a third of the students played, while many others turned out to watch.

Kids like nothing better than an excuse to get out of class—for a single day, a series of days, or even just an hour. At George Kelly Elementary in Tracy, Calif., the entire student body turns out for the 7th graders’ annual Egg Drop. Part of the 7th grade math curriculum involves figuring out how to package an egg so it won’t break when it’s dropped. Who better to test the packages than the local fire department? Firefighters roll up in their big truck and extend its ladder to maximum height. A firefighter climbs the ladder and drops each bundle to the ground. Kids vote yea or nay on whether each egg will break. The event concludes with a brief presentation on fire safety. “Since the firemen have the whole school’s attention anyway, it’s a perfect opportunity,” says PTO fundraising cochair Cindy Adams.

There are lots of fun ways to get students out of the classroom and having fun outside. The Abner Gibbs Elementary PTO in Westfield, Mass., held a giant game of musical chairs that involved kids, parents, and teachers. Round Hills Elementary in Williamsport, Pa., set a Guinness World Record by having 300 people play hopscotch simultaneously.

Family night is really an all-night affair at the annual Kimberly Kampout at Kimberly Elementary School in Redlands, Calif. The PTA serves dinner and s’mores followed by a movie. Families are welcome to pitch a tent and spend the night, with breakfast served in the morning. For its most recent event, the parent group hosted 900 people for dinner and 550 spent the night.

Family campouts on school grounds are inexpensive and easy to plan. Add field-day-type games like the three-legged race or water balloon toss for extra fun. Kermit King Elementary in Paso Robles, Calif., holds a campout on the last day of school as a fun start for the summer. Family Movie Night is a longtime school favorite. Order a free Family Movie Night planning kit at ptotoday.com/sfn. 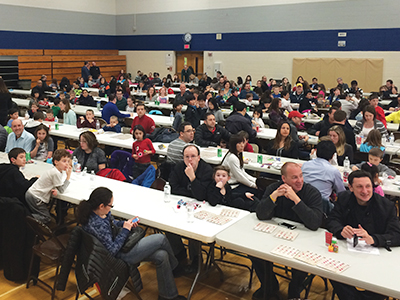 Kids love to play games, and bingo is a favorite. The District 102 PTO in Buffalo Grove, Ill., hosted a bingo night for four schools in 2015. More than 1,000 people attended. The population is culturally diverse, with 32 languages spoken. In many instances, families didn’t know how to play bingo and had to be taught. Everyone got the hang of it easily, young kids and grown-ups alike. Kids, parents, and grandparents played alongside each other for hours, competing for prizes. The principals from the four schools served as bingo callers, and the numbers were displayed on an electronic board. Dinner was available, and numerous raffle drawings took place during the evening, as well.

It’s easy to find fun bingo variations. For book bingo, winners choose a book from a book table (gently used books work just as well as new ones). Word bingo helps students develop their reading skills by using sight words and spelling words instead of numbers. The International Spanish Language Academy in Minnetonka, Minn., plays loteria, a lively game popular in Mexico that uses pictures or playing cards instead of numbers. Cards are read in both Spanish and English. The Forest View and Forest Lake (Minn.) Elementary PTA packed the house for a Thanksgiving-time bingo game and gave out frozen turkeys as prizes. 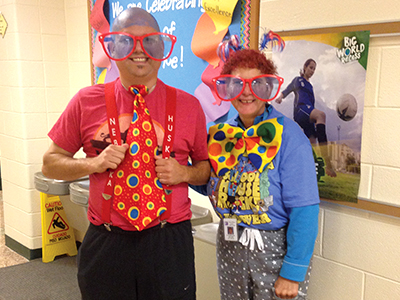 Students are excited to see their teachers or the principal step out of character. Whether it’s teachers performing a skit for spirit day or the principal taking part in a silly stunt as a fundraising incentive, having the adults do something unexpected is a sure way to create excitement. The staff at George Kelly Elementary gamely endured getting pelted with small, wet sponges to do their part to raise money for Relay for Life. This soggy treatment occurred during the school’s annual walkathon, the proceeds of which support the national fundraiser. Kids eagerly line up with their quarters, nickels, and dimes for the chance to hurl away at their favorite teacher or principal tethered to a fence a short distance away.

The principal and vice principal at Rosa Parks Elementary in Woodbridge, Va., promised to dress in full clown regalia if students managed to get a donation from every state during the school’s annual fun run. The goal was met and the principals kept their promise, to the delight of students.

Get students pumped up for a reading challenge or a fundraising goal by organizing a flash mob at a kickoff assembly. Teachers and parents at Winn (Mich.) Elementary launched a winter fitness program with a surprise dance to the song “YMCA.” Another option is to film a parody video to a popular song. (Do an online search for “teacher parody video” for many examples.) The videos, which star school staff members and often include students, replace song lyrics with school-related language. In one video, the viral hit “What Does the Fox Say?” becomes “What Does the Teacher Say?” with lines reminding students to walk, not run, in the school halls.