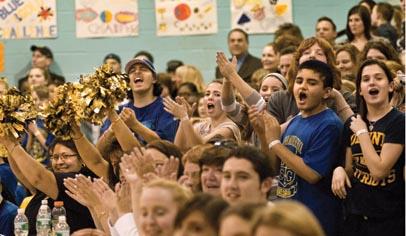 Teams of students compete in a basketball tournament that has become a rallying point for the entire middle school.

A road sign directing visitors to Colonia Middle School in New Jersey features a blue sneaker. This logo was selected because the school has become identified with its annual basketball tournament, the Blue & Gold Challenge. “It’s what our school is known for,” says PTO copresident Kellie Cuzzola. “We’ve become kind of famous.”

For six years, this school of 650 students in grades 6-8 has manufactured its own brand of March Madness. About a third of the kids participate as players or cheerleaders, with another third watching from the stands. The idea for the tournament grew out of a hoops-shooting contest called Dunking for Dollars, held during three consecutive days in gym classes, in which students collected pledges for making baskets.

The PE teachers, Trish MacDonald and Annette McCullough, thought that expanding the event might be a good way to get kids more active during the winter. They also sought to involve teachers and parents. Plus, says Cuzzola, they wanted to boost school spirit: “There’s a real drop-off of involvement after elementary school. We were looking for an evening activity to bring in kids of this age.”

The result is a tournament in which students are divided into two teams representing the school colors, blue and gold. At 6:30 p.m., 6th graders take the court. They play half-court, so two games occur simultaneously with four or five players per team. After 10 minutes, the buzzer sounds and new players take the court for another round. There are no time-outs. Baskets count either one point or two points, depending on where the shot is made. Beyond these exceptions, traditional basketball rules apply. “At this age, it has to be official; kids won’t play if it’s corny,” Cuzzola says. “We try to make it as much of a real competition as possible.”

The scoreboard registers the cumulative points made for each team, and the numbers continue to rise as the 7th graders begin play at 7:30 and the 8th graders an hour later. After all teams have played, a winner is crowned. But that’s not the end of the evening—the final event is a 20-minute, full-court game between faculty members and 8th graders, who have been chosen by lottery.

Early on in their Colonia experience, students anticipate this challenge. “Our middle school students look forward to the tournament when they come in as 6th graders,” says Joan Hruska, who has chaired the PTO committee running the Blue & Gold Challenge for the past three years. “You hear them say, ‘Oh, when I’m in 8th grade, I want to play the faculty.’”

One of the most special aspects of the event is the intense involvement of teachers. The PE teachers spend months working with students during class, teaching them about basketball and helping the volunteer cheerleaders with routines before and after school. During the event, in addition to playing against the 8th grade students, teachers serve in broader roles. One acts as DJ, playing music and periodically calling attention to the scoreboard. Others are referees and scorers, and some teachers put together their own cheerleading squad for the faculty-student game. There are plenty of faculty among the spectators, too. In all, about 40 staff members—half the school—participate. “The principal calls it ‘team-building night’ among his staff,” Hruska says.

“It’s a happy evening, a great event that develops communication,” says principal Gregg Miller, who provides dinner for staff members that evening. “Some teachers never spoke to another teacher on another floor. How does that help in the long term? Kids go from one grade level to the next. There’s more openness among the staff.”

Another benefit is more active involvement in the PTO. “Other middle school PTOs in our area are struggling,” says Cuzzola. “We’re the only one that has events like the Blue & Gold Challenge, a school play, and dances for each grade level.” The PTO sets up a table at the basketball tournament to encourage parents to volunteer. “It’s a great opportunity for parents to see kids having fun,” she says. “Parents realize the kids really do need their help and that they have to stay involved. And parents feel energized. It’s a big school spirit night that makes them want to join.”

In preparation, a committee of seven PTO members plus the two gym teachers gear up in December. They begin by recruiting participants. For three weeks, the PE teachers repeatedly send out information/permission forms for prospective players and cheerleaders. The cost to participate is $10, which includes a blue or gold T-shirt and a wrist band for admission to the gym. Once the participant forms have been collected, the PTO sends out forms for nonparticipants who wish to order $5 T-shirts and wrist bands, along with permission slips for attendance. “We wait until registration is done before we do the T-shirt sales, and we note that it’s not for participants,” Hruska explains. “Before, we got calls from parents saying they thought they’d paid.” Practice for players and cheerleaders begins in early February.

Wrist bands are required for every student to enter the gym, and they must be purchased in advance. This ensures that every child who attends has submitted a permission slip. Nonparticipants are encouraged to buy T-shirts and to decorate the gym with signs. “There’s a lot of school spirit that begins to bubble around the beginning of the new year,” Cuzzola says. Students wear their T-shirts to school on game day, turning the student body into a “sea of blue and gold,” according to PE teacher MacDonald.

On game night, players and cheerleaders enter the gym through the cafeteria so they don’t have to wait in line in the cold, a change instituted after complaints about problems getting inside in time. Teams include both males and females, although the cheerleading squads attract all girls.

Volunteer recruitment begins in springtime for the following year and includes parents of rising 6th graders. Getting enough volunteers was a struggle in the beginning, Cuzzola admits. “What we found to be best is to have a lot of helpers and not a lot of leaders,” she says. “We have multiple people on all the committees.” About 20 to 30 parents rotate in and out so that no one misses seeing their own children play.

Food is sold throughout the evening. The menu varies from year to year but might include pizza, hamburgers, or hot dogs in addition to water, sports drinks, baked goods, hot pretzels, and cookies donated from local supermarkets. Food sales, a game night raffle, and the sale of T-shirts and wrist bands bring in profits of about $5,000 a year.

The success of the Blue & Gold Challenge has meant that the middle school gym is packed. As a result, a suggestion was floated to move the tournament to the larger facility at the high school. “But there was total resistance,” Cuzzola says. “The faculty and kids want to keep it in their school. They prefer lesser accommodations and more school spirit.”

Pulling off a sports competition requires participation from everyone in the school community:

PE staff. Enlist the support of your PE teachers. Their involvement is a must for a successful tournament.

The principal. Win over the principal, and he or she will encourage faculty to get involved.

Teachers. Get teachers excited about participating as referees, scorers, cheerleaders, players, or spectators. Their enthusiasm will spread to students.

Parents. Start recruiting the year before, and include parents of incoming students. Having a lot of volunteers frees up parents to watch their own children play.

Students. Involve the entire student body. Children who don’t want to play or cheer can make signs and wear T-shirts to support their team.

# bhpappas 2008-04-08 20:45
more parents should read this and take more interest in the children and schools
Refresh comments list
RSS feed for comments to this post