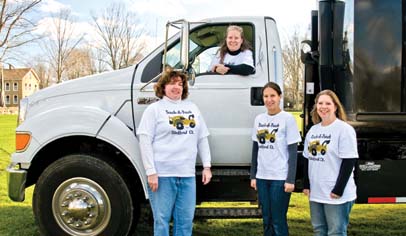 Cars and trucks galore drove the enjoyment at a communitywide fair.

Sharon Yefko is still not sure which is more incredible: the fact that the West Stafford School PTO’s first event ever hauled in more than 2,000 people or that it was done by a crew of rookie board members. She’s pretty certain, though, that folks had a blast that day at Touch-a-Truck, a fair turbocharged with family activities featuring everything from racecars and bucket loaders to farm equipment and SWAT vehicles.

Yefko got the Touch-a-Truck concept from her sister’s women’s club and wanted her Connecticut school to plan its own version, but there were a few potential roadblocks. One was her new and inexperienced board. Plus, two of the town’s schools had been closed, and the reconfiguration had made some parents uneasy.

To her delight, members overwhelmingly approved the proposal at their first meeting in September, and planning began immediately. Finding a location for the event was the simple part. “It was easy with a motor speedway right here in town,” Yefko says. “They were generous enough to let us use their acres of parking lots....They also offered to display a racecar and pace car.”

The real preparations started in January 2008, when tasks were divided among a few committees. That’s when Yefko figured out that she needed to join forces with the PTOs at the other two elementary schools in town. “It was the first time all three schools were working on a project together,” she says.

Volunteers from all three groups secured almost 60 vehicles plus a variety of non-wheeled entertainment, including the high school marching band and madrigal chorus, martial arts demonstrations, and the state police K-9 unit. Students got involved, too, through a PTO-sponsored art contest. “All the kids drew what kind of vehicle they would want to see at Touch-a-Truck,” Yefko says. “Everyone’s art was displayed in their school, and parents were invited to come see the drawings.” Leaders selected one student’s artwork to be scanned onto T-shirts sold at the event; two more randomly selected student entries received free admission.

Operating as a new PTO board alongside two other parent groups had its challenges, Yefko recalls, especially during the final two weeks of planning. But collaborating on the event gave all three PTOs visibility within the community and increased cooperation and communication among leaders—and, she says, the day of the event could not have worked out better.

“We’ve already been approached by vendors and people who attended last year saying that they can’t wait to attend again,” Yefko says. “That’s a great feeling.”

School size: 190 students, grades preK-1
Annual budget: $16,500
Fundraisers: Touch-a-Truck, book fair, holiday wreath sale, winter coffee sale
Mission statement: To bring together teachers, parents, and the community so they may work together to create a fun and successful learning environment for our children.

Touch-a-Truck
A fair showcasing vehicles of all sizes along with food, music, and activities

Revving up: The vendor committee wrote almost 250 letters to businesses, requesting vehicle sponsorships or funding pledges. After that, volunteers called local trucking companies, the fire and police departments, and oil and construction companies; many eagerly offered their vehicles for the day or referred parent leaders to friends or associates who could help. Committee members followed up with reminder letters to sponsors to confirm the date, time, and other details.

All systems go: Event cochairs Sharon Yefko and Jennifer Worthington held four planning meetings each month—two during the day at school, and two in the evening at the town library. “That way, we included parents who were working,” Yefko explains. The event was made possible by some 40 parents, teachers, principals, and even the superintendent, who helped collect trash.

Fueling options: A local lodge sold hot dogs, and the three PTOs offered bottled water. A new restaurant provided other foods and soda and donated its profits to the PTOs. For the truck drivers, parent leaders scored free lunches from a local sandwich shop. They also included a community food drive to benefit a food bank and stationed a bucket loader at the entrance to collect the donations.